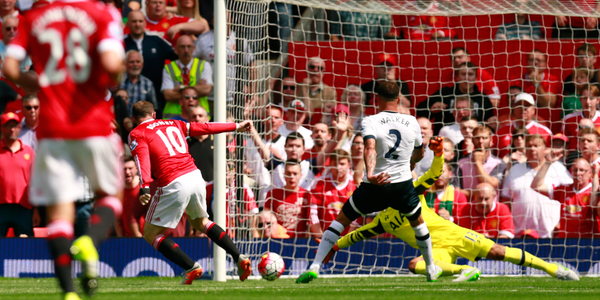 On the opening day of the Premier League season results are far more important than performances. Unlike the Manchester United we know, Louis van Gaal’s side forced a win without playing particularly well.

Tottenham Hotspur came to Old Trafford after mixed preparations this summer yet started the game promisingly. As the game progressed the Lilywhites looked fatigued and undeservedly went a goal behind on the 22nd minute through a Kyle Walker own goal.

After David de Gea’s transfer saga took an interesting turn in Real Madrid’s favour with van Gaal not believing the Spanish goalkeeper’s mind is in the right place to start on Saturday, Sergio Romero was one of four new signings handed a debut.

In hindsight, not caring too much about the performance on display, it was a satisfying result for United and much preferable to what happened against Swansea City a year ago.

While BT Sport (decided by Michael Owen and Glen Hoddle) presented Chris Smalling with the man of the match award, it was debutant Matteo Darmian that caught most of the attention showcasing a fascinating display at right-back.

No disrespect to Smalling, who performed superbly alongside centre-back rookie Daley Blind. The England international was brilliant again against Spurs playing again with Harry Kane stuck inside his arse pocket.

Other debutants included Memphis Depay, Morgan Schneiderlin and substitute Bastian Schweinsteiger. All were involved in glimpses of encouraging movements but more will be expected as the season commences.

Mauricio Pochettino appeared most angered of the two managers with van Gaal off the his ‘favourite restaurant’ – Wing’s – for birthday celebrations tonight.

The North London side were entitled to feel hard done after creating more chances, although were not clinical enough. United, on the other hand, finished the game with just one shot on target.

Reflecting on Spurs’ performance, they’re a side that will prove difficult to beat this season once they get the ball rolling in all departments. Defensively an improvement was required and they have strengthened but another attacking signing before the transfer window closes wouldn’t be the worst idea.

Next up for United is Aston Villa away on Friday night. Starting the season with real momentum is always the plan and we didn’t achieve that last year. Another 3 points and an improvement performance wise; United cannot wait until October for their first away win again.