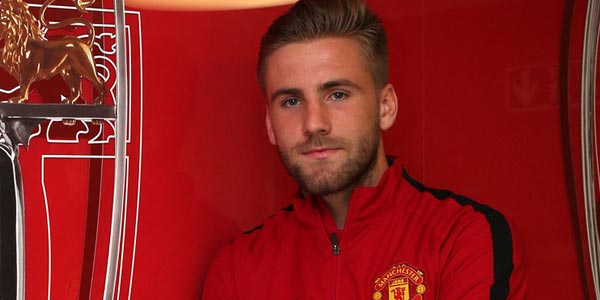 Every year it is advised that fans should wait before getting a player’s name and number on the back of a new shirt.

Some fans take a risk with players that have been at the club over a year, especially when they are considered first team regulars.

Luke Shaw, who joined from Southampton last summer, wore the number 3 shirt in his first season at Old Trafford. It is a prominent number for your average left back but the England international prefers the 23 since his days at St Mary’s Stadium.

@ManUtd got this last week pic.twitter.com/LcaeyCJVQs

United fan Robert Burke (@robert_burke3) is one of a misfortunate few that opted to get Shaw’s name and number on the back of his new jersey, an expensive mistake until the 20-year-old caught wind of the mix-up on Twitter.

Robert used Twitter to show his frustration before screen-shotting a direct message from Shaw asking for the fan’s postal address in order to send out the new jersey with the squad number corrected.

A lovely touch from Shaw after a difficult initial season at Old Trafford. Communication between footballers and fans does seem to be dying but this was great to see. As Brendan Rodgers would say, it shows great character.

Hopefully it doesn’t give Robert the initiative to go out next year and make the same mistake but the chances of it happening again are unlikely unless he opts for a new signing.

However, the three fans that purchased Angel Di Maria shirts in the megastore on launch day will not get a refund. Yes. Three.