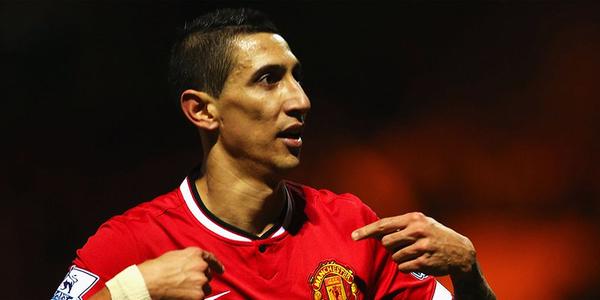 14th September 2014. Louis Van Gaal’s newly assembled Manchester United are in the process of decimating a toothless Queens Park ‘Raisins’. They, like the 75,000 taken aback reds inside Old Trafford, are seemingly awe-struck by the flowing effervescence and freedom on display as the new recruits appear to be taking to Premier League life like a duck to water.

The costliest of the newly christened ‘Gaalacticos’ is having a spellbinding game too.  Being the latest incumbent of the iconic number seven shirt, steeped in ineradicable history, playing his first match in front of expectant Mancunians and the expensive price tag weighed on his shoulders seemed featherweight barriers in Angel di Maria’s premier audition on the biggest of stages.

Despite endearing himself to the United faithful with a wicked free-kick going all the way through the ruck of bodies to give United the lead, the real coup de grace was delivered in the second half with a moment of outrageous extravagance, that was almost designed to emphasise precisely why United decided to part with the best part of sixty million pounds worth of reddies.

United fans, who have witnessed their fair share of showmen and entertainers down the years, were treated to a sublime, ridiculous outside of the left boot chip into Robin Van Persie’s path which led to another opportunity to heap more misery on the Londoners. The fact Van Persie’s volley was kept out by Rob Green was a mere triviality, the resounding gasp of admiration around the ground was celebration worthy in itself. We were witnessing something special.

El Fideo had announced himself to all corners of Old Trafford. That moment was deserving of a shrug and a smirk of our famous popped collared, Gallic legend, who previously adorned the iconic number 7 shirt. That shirt had become burdensome, an unnatural fit around the torsos of Michael Owen and Antonio Valencia. It felt real with Angel di Maria, it belonged to this gangly, stick-thin Argentine.

His early season displays hinted not only at what was, in theory, to come, but also glories past. Cantona, Beckham, Ronaldo, di Maria- his name did not look incorrectly categorised among that A-List of occupants: The remarkable chip at Leicester a week later to give United an early 2-0 lead was further justification for the huge outlay, a goal that will always live in our memories.

Di Maria’s arrival evoked the sort of hope and anticipation that two of the aforementioned former occupants of the number 7 shirt brought as they arrived on these shores. Eric Cantona was the catalyst behind Sir Alex Ferguson’s unprecedented trophy haul and, even from the embryonic stage of his United career, it was clear that United had acquired an unpolished gem in Cristiano Ronaldo.

Di Maria was the finished article, coming off the back of a man of the match display to clinch the holy La Decima for Real Madrid, ready to propel United back to where they belong. His speed, technical ability and energy were the ingredients that were missing from the recipes David Moyes tried to concoct.

As Kasper Schmeichel, in dumbfounded fashion, picked di Maria’s stunning scoop out of his net and the Argentine peeled away to celebrate in his traditional love-heart manner, United fans were in love. Real Madrid looked the lamebrains of the transfer market, di Maria’s stock had spiked with the quick adaptation to Premier League life. Di Maria’s fast start continued with a goal and assist as United beat Everton at Old Trafford.

So where did it all go so horribly wrong?

Sadly, this would be where the pyrotechnics would abate, a winter of melancholy would follow the delights of autumn. The Argentine would fail to find the net in the bread and butter of Premier League football after beating Tim Howard, with his last strike sealing the third round FA Cup tie at Yeovil. The seven month barren spell in front of goal indicative of a ‘stunning’, for want of a better word, demise after the mesmerising opening salvos to his United career.

A profligacy in front of goal as a winger, when your default remit is to provide the ammunition rather than be on the end of it, is surely not the decisive factor in deciphering how a player plummets from zenith to nadir in a matter of months.

As was well-documented, other extenuating circumstances were at hand in turning di Maria’s world upside down: Notwithstanding the fact that niggling injuries restricted him to less than half an hour’s action between November and January, di Maria and his family were dining at their Cheshire residence when they were subject of an attempted break-in. At a time when the nights were closing in, the weather was bleak, the di Maria family, with next to no English between them would be forgiven if they had thought there and then that enough was enough.

Rock bottom came in the galling FA Cup defeat at home to Arsenal, where di Maria was sent off for a dive and a subsequent manhandling of referee Michael Oliver in his protests against the first booking. This was where doubts began to surface about the player’s mindset and attitude, any chance United had of salvaging the tie was extinguished in that moment of madness. Di Maria was now cast as the expensive liability, with fans becoming more and more remorseless with every lacklustre display.

The final chance to impress came in the final day fixture at Hull. It turned out to be one of, if not the, most anticlimactic games of the season: a 0-0 snooze fest, with di Maria only lasting a matter of minutes before being substituted injured. Although the end of the season was nigh, and a Copa America looming, many questioned di Maria’s stomach for the fight, would a Steve Bruce or Roy Keane have left the field in similar circumstances?

It seemed di Maria had an appetite for redemption, when quizzed in the off-season about his time at United, telling reporters:

‘I’m not happy with my first year in England. I moved here from Real to win titles and this season has been very bad for me. I’m frustrated because I want to do better.

The fans in England have not seen the real Di Maria. I know I can offer a better level. This year was not good enough.’

A rampaging, second season di Maria releasing the first season shackles now appears to be a pipedream, with his transfer to Paris Saint-Germain only formalities away. Funnily enough, United were di Maria’s safety net when PSG were hampered by Financial Fair Play. His overriding yearning was the French capital over Manchester in 2014. The oil stained riches will be heading his way, albeit twelve months later than planned.

For di Maria to veer off the path to legend, he was waltzing and weaving down so effortlessly at the start, will go down as one of the biggest disappointments in United’s recent history.

He is spurning the opportunity to knuckle down and prove to the doubters that he belongs not only in the Premier League, but also in a United shirt. A foreigner arriving on new shores and initially struggling to acclimatise is so natural it is bordering on footballing cliche. Eden Hazard’s first season at Chelsea was not all candyfloss, but look at the levels he has set for himself now.

Di Maria would have ingratiated himself to United fans, who were still singing his name during the powderpuff displays, and bought himself more time had he chose to stay true to his words in interview and fought tooth and nail to show us all ‘the real di Maria’.

He has taken the easy option and his name will be added alongside the likes of Veron, Forlan, Kleberson and Falcao among others of failed South Americans who could not hack the Premier League.

Ultimately, di Maria will be remembered as the most expensive flop.

Who would have thought that at the King Power Stadium?