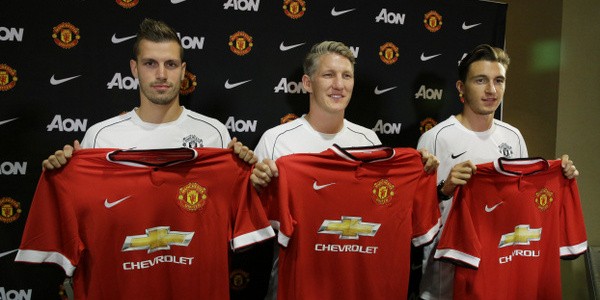 For a good decade or so, ever since the acrimonious departure of talismanic captain Roy Keane, Manchester United fans were force fed the same harrowing, biscuit taking excuses from the men in blazers trying to justify an evident and frankly inexcusable lack of strengthening in the areas that need bolstering as a matter of priority.

Sir Alex Ferguson’s tactical and managerial brilliance resulted in domestic hegemony, but in fact his unparalleled success for a quarter of a century was in essence a double edged sword- as his ability to coax the ability and stretch every sinew to the nth degree out of the likes of even Anderson and Tom Cleverley gave off the false impression that there were no brambles at all in the United rose garden.

That should not be confused with the reality that the cheque-book has had some heavy numbers scratched into it in our recent history. Dimitar Berbatov, Marouane Fellaini and Juan Mata can vouch for that, but none of those three could claim to be the saviours to the recurring Achilles heel that has plagued United since the ‘prawn sandwich’ christener said his ugly farewells.

Owen Hargreaves would have been the answer had he not had a NHS badge stating ‘Permanent Patient’ stitched on his shirt. An aggressive ball-winning midfielder with an understated ability on the ball, sounds very Keane like doesn’t it? That he was. The fact Paul Scholes had to re-lace his boots, interrupting his retirement into the Oldham sunset and such derailing any hope Paul Pogba had of making the grade, spoke volumes of a transfer policy which was ‘confused’ to put it kindly.

If only we knew whether Ferguson was the puppet on the Glazer string and being dictated to, or he genuinely believed the ‘no value in the market’ cliche. Times, and standpoints, have moved on in light of our booming commercial success, which has translated to two fundamental differences since Louis Van Gaal took control of a ship in choppy waters after you know who. a) Hard cash is being splashed yet again and significantly b) In the areas that NEED strengthening.

I am going to present my case to you that United have found value in the market to date this summer, in particular I am going to home the spotlight in on one of our midfield acquisitions.

As a season ticket holder high up in the Stretford End, my view of every match is among one of the very best in the house. No angle of the action could possibly go unmissed from my vantage point, I can spot which players are influencing the game with ease, which are treading water and which are having the proverbial ‘mare on the field.

I was in attendance for every home match last campaign and, as a match-going supporter, assessments are made not only in terms of our own players: You recognise who put up the limpest fight and who deserved the plaudits, not only from an individual but a team perspective.

The team that impressed me the most at Old Trafford was in fact the first of only two sides (West Brom being the other) to come away from the Theatre of Dreams with a precious clean sheet: Ronald Koeman’s Southampton.

In stark contrast to the United Twitterati, who were doubtless onto social media venting their spleens as quickly as some sections of the crowd head for the exits of Old Trafford as soon as the clock hits the 80th minute, Koeman’s team headed down the tunnel after saluting their travelling faithful to a a small smattering of United fans clapping them off the field.

Class seldom shines through in the aftermath of a defeat. Why should it either? Our whole week is building up to United getting three points on the weekend, it is a galling feeling. Defeat was made all that more difficult to stomach when Fleet Street were all somersaults and cartwheels when they realised Dusan Tadic’s winner that day had consigned United to the same points tally under Van Gaal as Moyes at the same stage. In the gladiatorial, cut-throat, win at all costs environment of modern day Premier League football, Southampton’s collective performance on that day was really something to be afforded a clapping off.

The late winter was the time the Rooney experimentation in the engine room was in full swing and not overly convincing many. Not that deploying the best striker on your books as far away from the goal as possible was the solitary antidote, we still had the calming ‘piano’ in Michael Carrick propping up the midfield. Amid the relentless, frenetic heavy rock in the midfield battle, the piano comes out of the mosh-pit unscathed. Most of the time…

United were met by a Southampton side organisation personified. The nucleus of that seemingly impenetrable spine caught my eye that afternoon. This was the first time I had seen Morgan Schneiderlin in the flesh, despite numerous admirable glances via the comfort of the sofa. At the time, there was still time for maneuvering with the transfer window reaching its dying embers. The Frenchman had strongly been linked with a reunion with his former manager Mauricio Pochettino at Spurs. Within those very ninety minutes, I knew he was a United player. I thought to myself, ‘We could do a lot worse than him, don’t limit yourself, Morgan’.

The fact United needed their midfield bolstering was about as secretive as a Tulisa sex tape. Louis Van Gaal knew about it, the midfield that is. The Dutchman’s preparation and analysis is reportedly as meticulous as they come- it would not have escaped his attention this summer, whilst devising targets to strengthen the engine room, that Schneiderlin’s masterful performance on Old Trafford was the only match which United lost when Michael Carrick started.

The incredulity surrounding the fact that United were virtually dependent on a 33 year old to be the fulcrum behind their victories only made the cries for midfield additions all the more deafening.

United made it well-known that one of their prerogatives this transfer window was to secure a No.6 in the mould of Michael Carrick. Schneiderlin, with four years Premier League experience fits the bill, with no need to acclimatise to new a new language or culture to boot: Despite playing ten fewer games than the much lauded Chelsea anchor Nemanja Matic, Schneiderlin made more tackles and interceptions per game with a better passing accuracy (89.3%) and chipped in with four goals.

Those statistics would suggest we have signed a midfielder with a Keane/Carrick blend: He mixes the elegance on the ball and vision from deep with a relish for the physical side. He has coupled a developing finesse with the ability to put out fires and stick his foot in when needed. At over six foot too, he will undoubtedly give United an extra dimension in both boxes, something which Van Gaal publicly lamented a lack of last season.

Although he should not be glorified as a Roy Keane clone, the potential to be as important an enforcer in midfield is there for us to reap the rewards. As Dale wrote in his feature last week, the steel has arrived in our midfield once again, putting pay to ten years of excuses.

Just over £20M for a proven, established Premier League player with time, at a mere 25 years of age, to take his game to another level?

One response to “Within ninety minutes, I knew he was a United player”