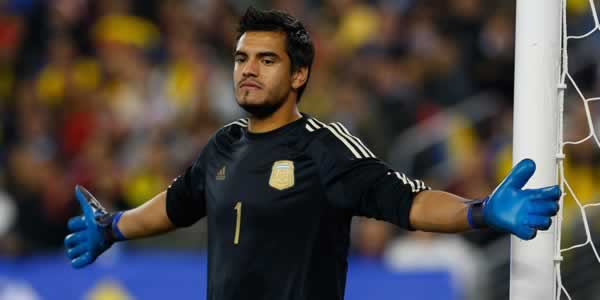 According to Jamie Jackson of the Guardian, Manchester United are inching towards signing Sergio Romero as Louis van Gaal seeks a replacement for Victor Valdés.

Valdes fell out of favour with the manager following a bust up and alleged refusal to play for the Reserves and the Spanish goalkeeper now finds himself on United’s for sale list.

Romero, 28, spent last season on loan at Monaco from Sampdoria and impressed as the Argentina No1 at the 2014 World Cup in Brazil.

Serie A giants Roma are also interested in Romero but are willing to offer the Argentine a starting role rather than second choice. That creates a dilemma for the goalkeeper, who sees United as the greater club, obviously.

David de Gea is still expected to leave Old Trafford this summer but the saga is continuing the drag on. United will not leave the keeper leave unless they get the fee demanded or Sergio Ramos in return. Real Madrid do not want to see Ramos, the newly announced captain following Iker Casillas’ exit, sold but the player has reportedly told them he wants a switch to United, as per talkSPORT.