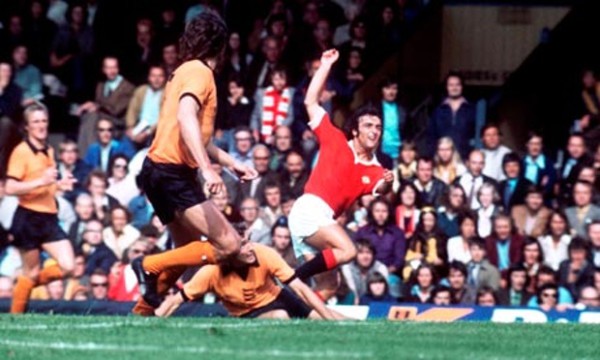 Firstly, I’d like to apologies for the delay of this interview being uploaded. It was conducted in May but the camera’s sound quality came back distorted due to the music in the background but luckily the dictaphone was switched on and in a better position to pick everything up.

That meant more work on the editing side of things to try and match the video with audio which are two completely different files. I have to credit Serge Fagelman for going out of his way during this busy period for him personally.

Lou Macari is one of the finest gentlemen in football I have yet to meet. The interview was carried out at Old Trafford’s Treble Suite before the final game of the 2014/15 season which explains the noise in the background.

Macari joined United from Celtic in 1973 where he made his first team debut three years earlier. His first game for the reds was against West Ham United in which he scored an equaliser to make it 2-2, the final score.

One of his greatest moments at United came in 1977 when a deflected shot off team-mate Jimmy Greenhoff won the FA Cup final against Liverpool, denying the Scousers a European Treble.

The Scot played in the Second Division for United alongside Gordon Hill, Steve Coppell and the Greenhoff brothers in 1974 under Tommy Docherty. They went on to win it that season and finished third on their return to the top flight.

In 1979, Macari was on the losing side in the FA Cup final against Arsenal finishing 3-2. The two goals from United were scored by Gordon McQueen and Sammy McIlroy.