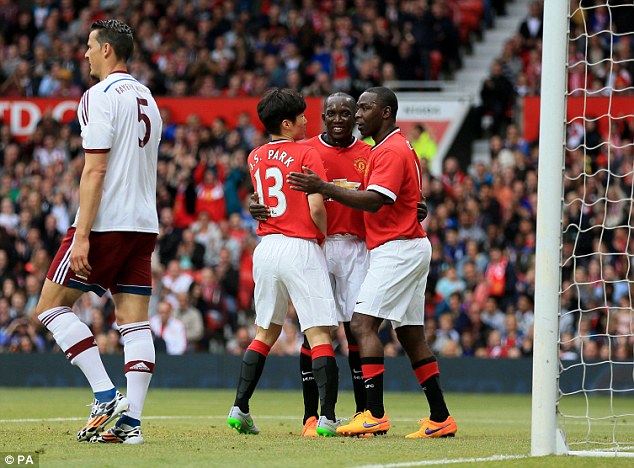 Despite confirmation that Mikael Silvestre would start at left-back from the official Manchester United Twitter account, Denis Irwin played the role from kick-off instead.

It was business as usual for Paul Scholes, who started the game pinging passes to both right and left wings just like he did in his prime.

The first real chance came after five minutes when a lobbed Park Ji-sung pass outside the box almost found Dwight Yorke before Butt collected the ball.

Louis Saha opened the scoring after 8 minutes of play from a rebound effort. Sadly for the Frenchman, he soon picked up an injury and was replaced by Jesper Blomqvist.

“I think I’ve done my calf, I felt it when I passed the ball.”

Park continued as Manchester United’s architect but Yorke was very wasteful early on and not contributing much. Bayern Munich captain Paul Breitner, aged 63, looked one of the fittest men on the pitch but was replaced by former Manchester City player Michael Tarnet.

Bayern equalised after 15 minutes when Scholes did a Steven Gerrard by placing a risky back-pass into the path of Alexander Zickler, who comfortably took the ball around Edwin van der Sar before slotting the ball into the net.

One of the funniest moments in the game came when Andrew Cole was spotted moaning after a penalty shout was dismissed by the referee. Yes, complaining in a charity match.

Just before the interval there was another three goals scoring with the scoreline (3-2) in Manchester United’s favour at half-time. Yorke scored following a scramble inside the box, Tarnet from a low driven free-kick and Cole with a beautiful finish.

Dion Dublin, Silvestre and Karel Poborsky were on brought on as substitutions at half time.

The second half then started with some showboating from Phil Neville. His step overs had the Stretford End in awe…

In terms of entertainment there was less after the interval. The pace had slowed down but United were the stronger side but both had similar counter-attacking approaches.

Prior to the hour mark Bayern saw a dangerous free kick crash off the post just before Edwin van der Sar was replaced by Raimond van der Gouw.

Andy Ritchie replaced Andrew Cole on the 66th minute giving fans that remember the 70’s something to shout about. (Watch our Stretty News TV interview with Ritchie)

United looked relaxed with 15 minutes remaining and Bryan Robson made an array of substitutions in order to give everyone a run out, including Clayton Blackmore who replaced Scholes.

The final goal was scored after 82 minutes of play when Blomqvist brillianty converted a Poborsky squared ball.

The attendance was confirmed at 50,100 which proved to be a success for the Manchester United Foundation.