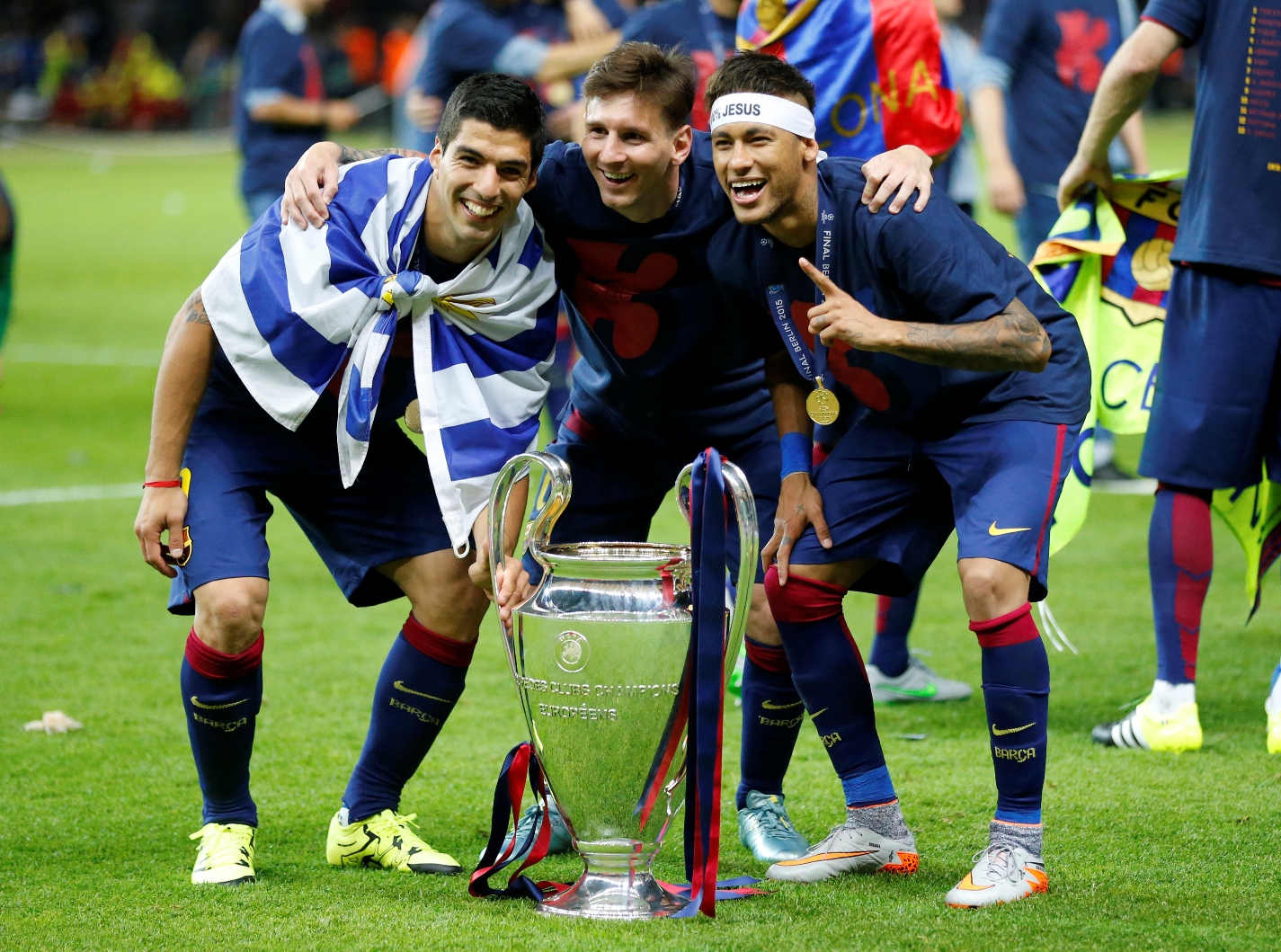 So it was, Neymar, a.k.a Rufio, leader of the Lost Boys, scored a goal to signal the end of the ultimate winner take all match. Barcelona, with their combination of admired living legends and pantomime villains – such as a near psychopathic racist – in toe completed a treble, which in hindsight was one of the great cup finals of the modern era. Barca were great, in part because The Old Lady went for their throats their sharpest daggers drawn.

The intensity levels were off the scale with things threatened to boil over less than half an hour in when Arturo Vidal (or Arthur Windham to you arch Anglo Saxons) almost got red carded repeatedly. Not satisfied with simply looking like a stock Latin American drug lord character from a Jason Statham B-movie, he decided to try and challenge every Barcelona player to a fight. Pogba looked close to losing his head too, taking a silly booking and producing passing that was as erratic as his hair.

It was a game of controversy, intensity and quality, just like the semi-finals. In fact Chelsea’s last 16 tie with Paris Saint Germain were two of, if not the two best games (bar the nine goal carnage at Goodison Park) Chelsea played in all season. It reminded us of when big Premier League matches were at or near the zenith of quality in our stinking, corrupt cesspool of a game.

That is the problem right there for the Premier League, that thrilling final just demonstrated how far behind the self-proclaimed “Best League in the World is.” A description in itself that is totally ridiculous as the parameters for that title are so ill-defined. England isn’t a step behind, it’s bloody miles behind.

I’m all for thrilling football, something I’ve said many times but don’t mistake a love for exciting football with a love for seven, eight and nine goal thrillers or 5 minutes hat-tricks. Thrilling football is the high drama with teams and fans competing at a level so intense it melts your face like the opening of the Ark of the Covenant. The United-Arsenal clashes around the turn of the millennium fit that description: Skilful attacking football, imposing defending, ruthless aggression, every loose ball challenged and the ball passed around quicker than suspect sandwiches in your local boozer.

Clashes between, United, Chelsea and Liverpool, when Ferguson, Mourinho and Benitez carved up the landscape were also right up there. It raised England’s game in Europe too, monopolising places in quarter finals, semi-finals and finals. Indeed 2008 saw an all-English final while 2009 saw three English teams make the semi-finals. England’s team were combing tremendous technique with the hardnosed mentality of a Yorkshire miner.

Since then standards have dropped. Chelsea’s stunning wins in the Champions League and Europa League/Uefa Cup/Fairs Cup/Intercity Cup/”We’ve spoiled this cup” Cup were the last desperate wild lunging hooks from a struggling champion trying to fell his opponent in the 12th while behind on all the scorecards.

Gary Neville, in another analytical masterclass, highlighted in this video how wet and limp big domestic games in England have been this season. The struggle to make things happen is what makes games great. A team being stopped by the opposition forces them to be inventive and incisive and true quality shows through. United have only ever been as great and as thrilling as the opposition when winning and challenging titles. It is why our last title win in 2013/2014 won’t live long in the memory, it was akin to being UFC World Heavyweight Champion and winning a brawl in a bar against a few drunk locals in Wigan. The competition was lousy.

This season has been poor. Big games have been far from memorable even with a few goals. It has all felt too easy and relaxed. The Arsenal vs Liverpool matches this season saw pot shots rained in from everywhere as nobody could be bothered to familiarise themselves with the concept of closing down the opposition.

Indeed United were guilty of this too. Capitulating at Leicester, being tepid at Everton and ponderous for most of the season, even in victory. United’s 3-0 win over Liverpool for instance saw United concede nearly 20 attempts at goal in a home game, including several clear cut chances. Even with a good result, big teams at home should be keeping opposition chance to single figures. Luckily Liverpool were flakier in defence than the scalp of the average bar fly and about as penetrative up front as the average drunken, drugged up, male Parklife reveller.

English football, at least at club level, needs Louis Van Gaal to start getting things right next season. To build United into a team that will challenge for every trophy. He needs to make sure he brings in the kind of players Neville mentioned in his analysis, excellent footballers who also happen to be tough and ready for a fight.

It also means Van Gaal should continue to be antagonistic and demanding of everyone. Not just the players but the staff, officials, rival clubs and the media (most of whom deserve nothing but his contempt anyway). The best managers make it look like they’d be ready to go to war with anyone. It’s the North Korean tactic of making everyone think you’re so f***ing crazy they’re even afraid to shake your hand.

That transmits down to the minds of the players. It reminds them of what is at stake, the battleground in front of them and the sheer force of will and competitiveness required to win. By and large the success of English football has depended on the quality of its two most successful clubs, United and Liverpool. Therefore since Brendon Rodgers continues to impersonate David Brent and nobody around here wants them to succeed anyway it comes down to Van Gaal and United.

With the lopsided, uncompetitive nature of the league, England’s standing depends on Van Gaal being at his best.