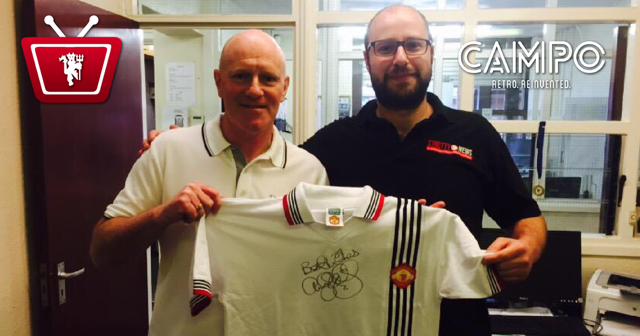 Which player, and former Manchester United team-mate, sold a shell-suit to Andy during their playing careers?

Email your answer to competition@strettynews.com with the subject title ‘Andy Ritchie’. In the message area, please contain your address for delivery.

This competition celebrates the beginning of our relationship with affiliate Campo Retro.

During the interview Jonathan Shrager delves into Andy’s times at United playing under both The Doc and Dave Sexton, the evolution of the club from sleeping giant to global juggernaut, and he also answers questions posed by Stretty News TV followers on Twitter.

The Ritchie sit-down is one of an ongoing series of interviews with ex-players conducted by our resident interviewer Jonathan Shrager, who prides himself on getting to the heart of his subjects, and consequently gaining insights into the essence of our beloved club Manchester United.

This ’77 away strip, as advertised on United Direct, is the closest offered by Campo Retro to Andy Ritchie’s span at Manchester United.