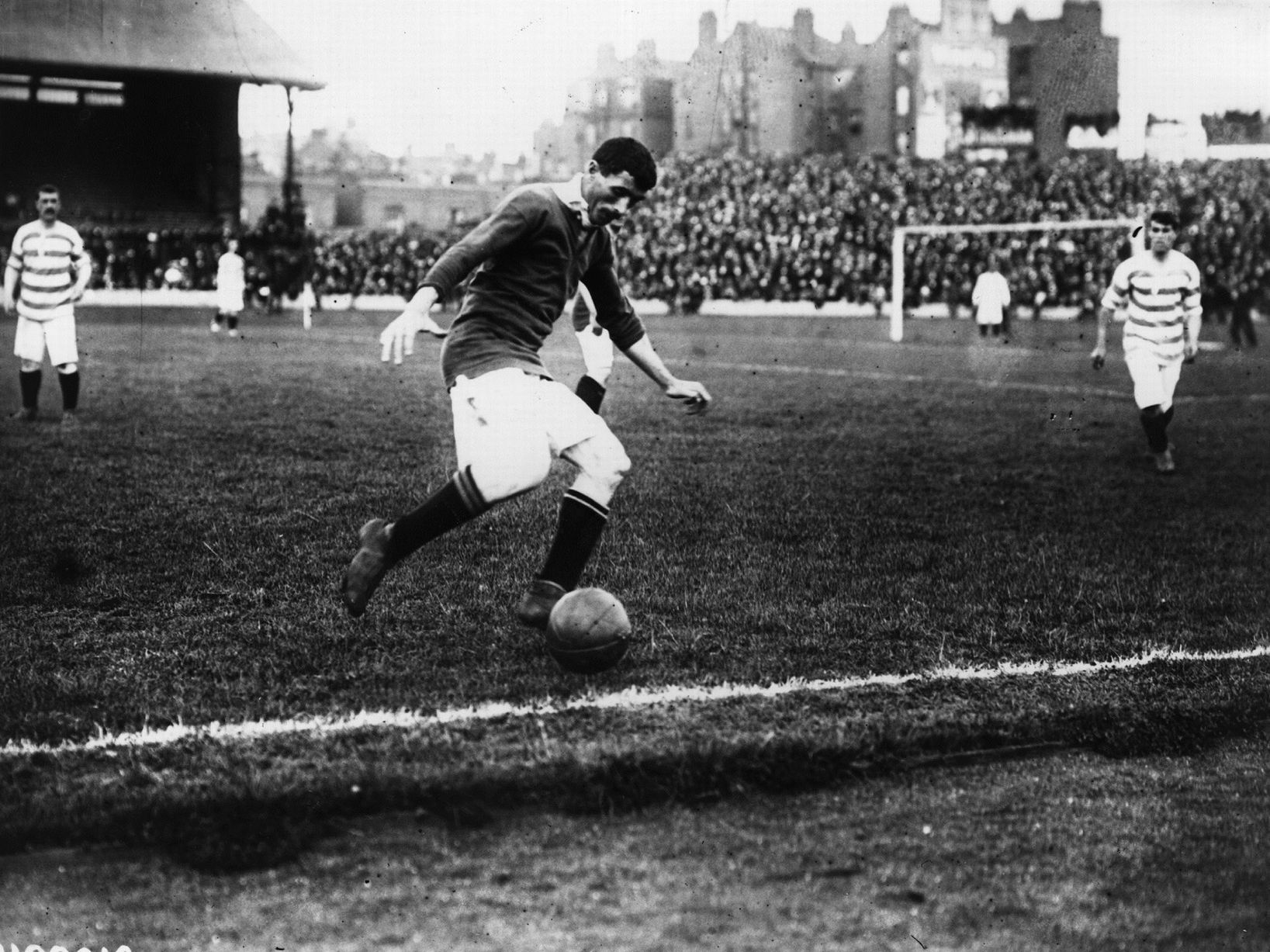 In early 20th century. Can you try to imagine the living conditions in Manchester?

Imagine a time where everything electronic was literally something you imagined, from television, mobile phones, computers to even a mere photograph.

For the trade industry it was different. The industry was booming because of the ship canal, but life for the working class was dreadful. Gaslight lighting the dark, dirty, unsanitary and overcrowded streets and in those days it was dark all the time due to the smog filled skies.

Streets were very often unpaved and were neither cleaned. Rubbish was not collected and it was allowed to accumulate in piles in the streets. There were no flushing toilets, you shared a bath with a huge family because in those days kids always died from disease, so the more kids you had gave your family a chance to grow. On top of all that misery, its safe to say the place probably stunk of sewage 24/7.

But every week fans would get the chance to forget life and support their team, witness their heroes and converse with friends for days on end about the brilliance they had seen the weekend before. Remember, they didn’t have footage of these moments as television was still a pipe dream.

Before Cristiano Ronaldo, Ryan Giggs, Eric Cantona, George Best and the Busby Babes, we had Billy Meredith, the original, the first real football star we had at our club and who one hundred years after winning us the title, would be inducted to the English Football Hall of Fame in 2007.

Chewing on a toothpick and looking James Bond cool, the Welsh Wizard would have his adoring fans singing along to his tune whilst he danced down the wings.

In those days, if you didn’t witness his skill, you could only hear about it.

Billy was born William Henry “Billy” Meredith on the 30 July 1874 in Chirk, North Wales. His early life was spent working down a mine, which is probably where he got his mental toughness from.

His career started at Northwich Victoria in 1892, playing eleven times and scoring 5 goals as a winger, this grabbed the attention of Manchester City and he signed for the Blues in 1894 before going on to win and lift the FA Cup for them in 1904.

Life was pretty good for Billy on the field. However off the field his business interests were, lets say, famously Del Boy Trotter like. So when he was banned for attempting to bribe Alex Leake of Aston Villa to throw a game for a tenner, people believed it, Manchester City fans believed it.

Most people were aware of the corruption at the club in those days and even Billy claimed his manager had put him up to it and despite his pleads for innocence which he took with him to his grave, no one believed Billy. The denial of wages added to his woes that prompted Billy to write an open letter to the Athletic News, justifying his decision to reveal the illegal actions of the club.

“You approve of the severe punishment administered by the Commission AGAINST ME and state that the offense I committed at Aston Villa should have wiped me out of football forever. Why ME ALONE? when I was only the spokesman of others equally guilty.”

So with life looking grim for Billy, one club decided to give him another chance and that was Manchester United and from that, the fifteen year love affair began when he signed the papers in 1906.

The fans, some times exceeding forty and fifty thousand strong would turn up to witness Billy Meredith and his unbelievable balance and agility. He had a tenacity to take on all before him, making his opposition look stupid every time they attempted to break his legs.

He was a journalist’s dream, a cartoonist’s dream, a fans’ dream and on top of that he had a supercool moustache. He would go on to make Manchester United a team that everyone couldn’t help but notice and champions, he would be our first marketable player.

Meredith was an innovator, he practiced after training, he didn’t drink or smoke and kept himself in peak condition which in those days wasn’t the thing to do. He understood that due to the very nature of the game he had to be one step ahead, he wasn’t facing classy defenders with the ability to read the game, he was facing enforcers who never even looked at the ball when charging into a challenge.

The pitches were awful, the ball was heavy, the stadiums were unsafe and the referees were usually obese old men trying to run off the five pints that they’d just drank, it was Sunday league bad! Yet despite this, Billy would still look like a modern day Messi compared to his opposition.

He was relentless, pinpoint accurate crossing, passing and the ability to time a late run into the box. When he was matched up with Bannister, Jimmy Turnbull, and Sandy Turnbull, Manchester United would be the dominant force and in the 1907–08 campaign they won the club their first ever title with a nine-point margin over second-placed Aston Villa. He went on to win the league in 1910–11, the FA Cup in 1909, as well as two FA Charity Shields.

On 7 May 1921, just short of his forty seventh birthday, he became United’s oldest ever player when he took to the field in a league game against Derby County, even at that age he still dazzled.

After his swan song he went on to sign for Manchester City and played his last match just short of his 50th Birthday, his club career saw him score 176 times in 74o games.

His International career with Wales was reminiscent of Ryan Giggs, he played 48 times but would have been more if the clubs were more flexible so to speak.

Outside of football, although a passionate man for the sport, he helped to set up the Players’ Union, Invested in local businesses, he was landlord of a pub, he even starred in a film and that was given good reviews.

The sad part of Billy’s story to me will always be his final months, he passed away two months after the Munich Air Disaster. The club he had helped build, won titles with, a club he loved was going through it’s biggest tragedy.

He would never get to see Sir Matt Busby, United and the fans turn that disaster around with such grace, dignity and courage.

As for clips of his genius, unfortunately they are few are far between. Sadly he even lay in an unmarked grave for years, before the Professional Footballers’ Association, the Welsh FA, Manchester City and Manchester United all agreed to cover the cost of upkeep on a new headstone.

I claim that Major the St Bernard who saved Manchester United should be honoured. I believe Billy Meredith should be as well.