The result at Anfield on the day before this game meant that United were now secure in fourth place. A win here though would see them leapfrog their opponents and put pressure on them, ensuring that to avoid an early season Champions League qualifying round Arsenal would need to get something from their game in hand.

The opening exchanges were fairly scrappy with both teams full of energy and keen to close the opposition down quickly. At this stage United’s passing was a little ponderous in the deep. Arsenal sat Giroud on Blind and this stopped him making much of an early contribution. When the ball went wide Arsenal were quick to press Valencia and Rojo but they sat off Smalling and Jones seemingly confident that they could control United if this pair had most of the ball. 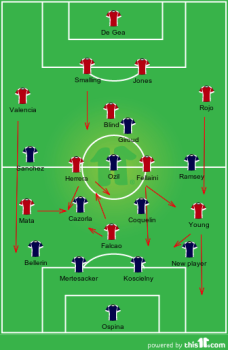 One consequence of this was that United tended to hit the ball longer than they would have liked. Unfortunately the ball tended to bounce of Falcao as he dropped deep to receive these passes and was mopped up by the Arsenal midfield who outnumbered him. The other long pass option was towards Fellaini and initially he struggled with the ball often not even reaching him. Blind didn’t do enough to present a passing option by losing his marker.

This initial phase of the game lasted about 10-15 minutes after which United gradually got on top and they were able to do so because of a number of factors.

The first factor was that the centre-backs, but notably Smalling had the confidence to move forward with the ball and engage the space in front of them. Perhaps Arsenal had miscalculated. This has been an area where United have improved during the season with Smalling looking confident to make a more significant contribution on the ball. Along with Young and Fellaini, Smalling is perhaps United’s most improved player through the season. Jones was a little more circumspect.

Another factor was that Rojo and Valencia stayed wide when United had the ball and tended to move wide and pass wide to Mata and Young or to Herrera and Fellaini when they dropped into these areas to link play. The direct running of Young on the left was a particular asset here. 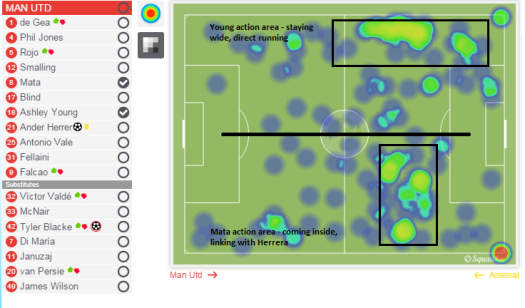 The other significant factor was the tempo of United’s passing in the midfield areas. This was excellent at times. Mata was fluid in his movements tending to come inside with Valencia pushing beyond him on the outside. Herrera was all over Cazorla and worked hard to circulate the ball quickly and Fellaini dropped deeper to receive a shorter out ball. But the problem for United was that so did Falcao.

This meant that much of United’s good play was in front of Arsenal who were able to limit United to a minimal number of clear cut chances. For all their possession they lacked a cutting edge. United were controlling the game but weren’t hurting Arsenal in the central areas where Coquelin and Cazorla patrolled. Coquelin especially had a good game and stopped United threatening the ‘D’ at the edge of the penalty area. United had much more fun attacking in wide areas, but the delivery into the box rarely picked out a red shirt. When it did they scored! 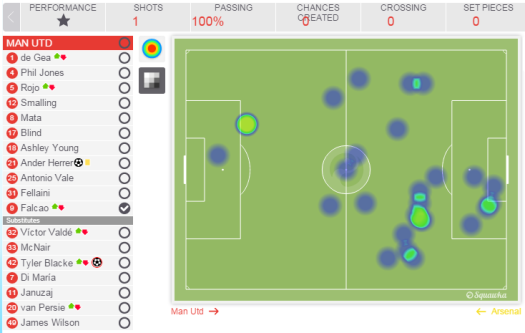 Falcao action areas, he completed 100% of his passes but made little impact and had only one shot on goal

Falcao was a great disappointment and one was left with the feeling that this might well be his last game at Old Trafford. Falcao made 11 passes before being substituted after an hour and had one shot. He worked hard and had a 100% pass completion rate but he lost the ball on countless occasions when he received a long pass with his back to goal. He was outnumbered in midfield areas surrounded by defenders or picked up by Coquelin or Cazorla. He made no impact and either lost possession or slowed the move down.

In the second half Arsenal fought back. The difference in this half was that Arsenal were playing higher and with more energy and so were engaging United more in their own half. Whereas in the first half they were passive, now they had evened up the contest by being more proactive. Their shape was still their preferred 4-2-3-1, but they had woken up.

This was most notable after a series of substitutions around the 72nd minute which allowed Arsenal to take control of the game and should have seen them go on to win it. De Gea pulled his hamstring and was replaced by Valdes making his debut. Van Gaal also chose to replace Rojo with Blackett at left full-back, stating afterwards that this was on returning from injury Rojo lacked match rhythm. At the same time Wenger replaced Bellerin and Cazorla with Wilshire and Walcott. This change put Arsenal on the front foot. Ramsey now tended to stay deeper and was moved centrally alongside Wilshire. Coquelin moved to right back allowing Walcott to stay high and run forward towards Balckett. Blackett was stretched to cope with this and Young and Fellaini had to drop deeper to help out. Wilshire helped feed Ozil and Sanchez as they looked to double up on Valencia. This dragged Smalling across. 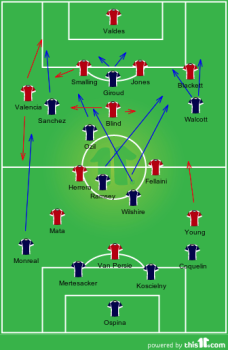 Game shape late in the second half

From this point on Arsenal looked stronger and stronger. It was Walcott who did the damage when his cross was deflected off Blackett past Valdes for the equalizer. The nature of this goal was perhaps unlucky, but it had been coming for about ten minutes. There should be no blame on Blackett for this as operating as a makeshift left-back he had done okay, but Arsenal certainly targeted him.

A lack of discipline

Having conceded United seemed to lose discipline throwing men forward with increased urgency. Where had this been when they were on top earlier in the game? They were in fact over urgent now and Arsenal should have punished United further by scoring a winning goal. United were looking wide open with the defence pushing high and Young and Fellaini no longer protecting Blackett. On the other side Valencia was far too high and Herrera chased the ball. United were lucky to escape.

United should have won this game. After the early skirmishes they took control, took the lead and should have gone on from there. Their lack of a cutting edge meant that they didn’t get a second goal leaving them vulnerable to Arsenal’s improvement in the second half.

Why did they lose focus when on top?

In every respect it was a game about two things; tempo and assertiveness.

In terms of tempo it was a case of slow quick slow. United tended to be slow and ponderous at the back, quick through the midfield and then slow at the front where they lacked punch. Fellaini and Falcao were the culprits slowing play down as the ball entered the final third. 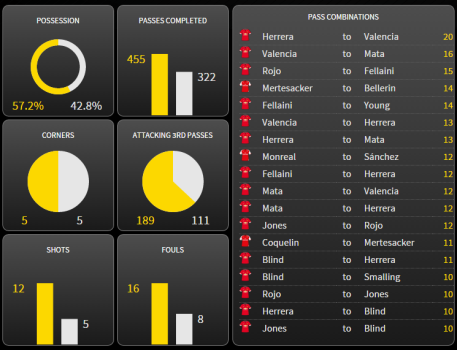 In terms of assertiveness United weren’t assertive enough after they had taken control of the game and this lethargy allowed an opportunity for Arsenal to be more assertive themselves after their lethargic first half. Perhaps Arsenal were happy with a point and only woke up after going behind, perhaps United were in a comfort zone and relaxed after securing a place in the Champions League qualifying round. The game had an end of season, nothing to play for feel about it but what this game clearly demonstrated was that both teams are actually at their best when they take the initiative and attack the opposition, both are weaker in defence and both lack a killer instinct up front.

There is plenty for both teams to work on before a title challenge can be made next season.