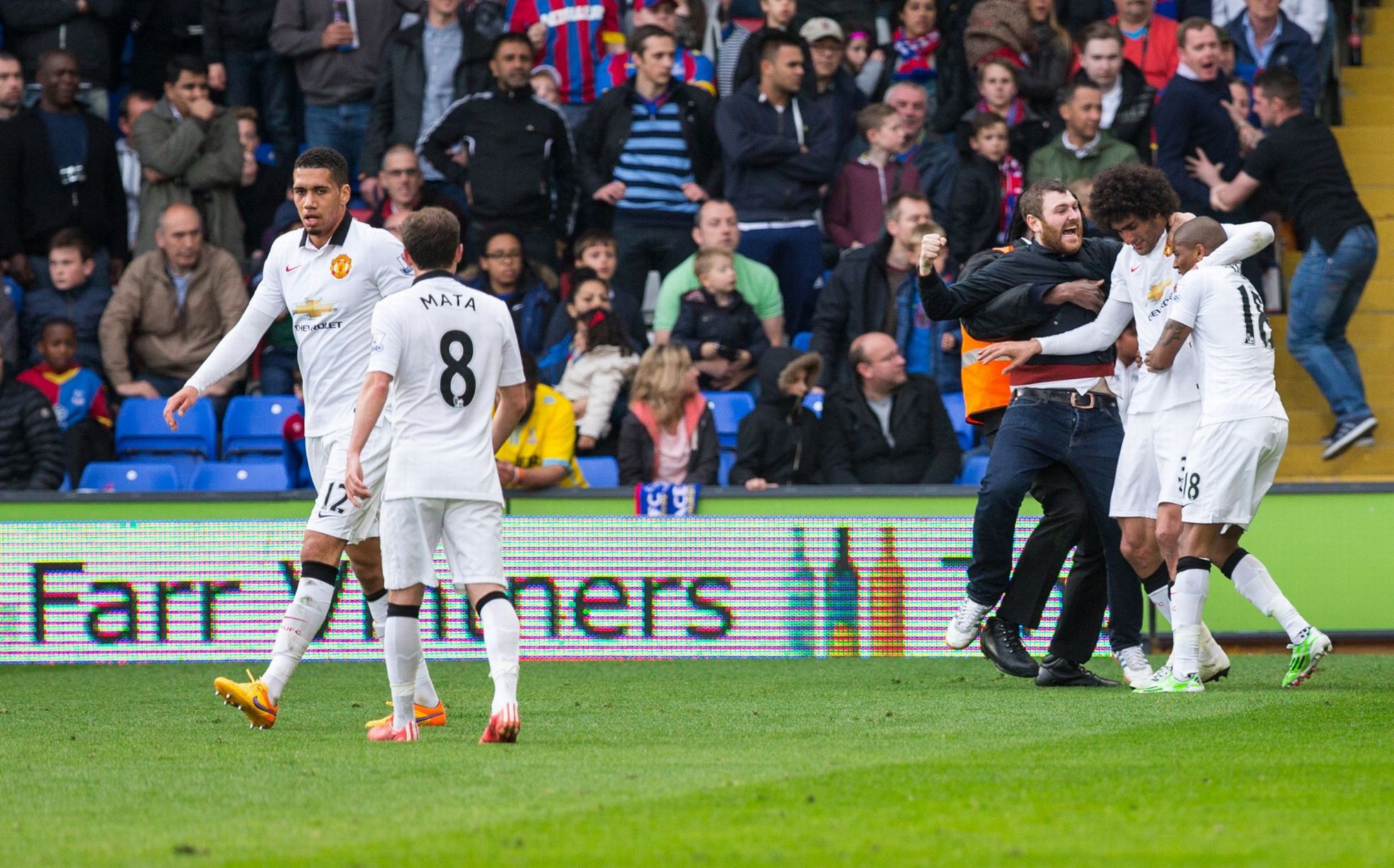 Dust off the passports boys and girls! It was tense and traumatic for most of the second half at Crystal Palace on Saturday, as the home side built up ahead of steam after the equaliser there only looked to be one winner. The overwrought apprehension before Afroman delivered was still an upgrade on the goalless dross served up in the three games previous.  We never do it easy- we should all know that by now.

It felt like a massive goal, just ask Adam McKola, whose wild Falcao embracing has caused quite the stir on social media. You would have got long odds at the start of the season that Falcao’s most telling contribution in a United shirt would be an indirect involvement in a goal; such was the fearsome reputation he had built up on his previous European ventures. That shove on Damien Delaney into Speroni turned out to be critical and ensured wild celebrations followed.

The way Palace virtually dominated the second half would have given cause of optimism across Merseyside. That United found a way to overcome their recent blues would have been a major body-blow, is there anything better than crushing Scouse hopes and dreams? Brenda and Co couldn’t claim maximum reward from a Chelsea side donning their flip-flops and nursing sore heads, meaning that United will return to Europe’s premier competition, barring a goal difference nightmare. I’ve rather missed that booming Champions League theme, haven’t you?

Despite a relatively promising start with controlled possession and a lead to boot, it turned into quite a struggle with not the slightest modicum of fluency or rhythm in our play after the restart. At this stage of the season, you only get plaudits for pretty football- aesthetics go out of the window, substance ruthlessly prevails over style, it is all about getting over the line. Who gives two hoots about the performance? We have Champions League, baby! Euphoria and relief masked the acceptance that we were frankly shocking. Still, to play so bad and win has been a long-established hallmark of good sides- Liverpool and city came away from Selhurst Park with nada after all.

The win that effectively clinched our spot in the top 4 was, in large part, down to yet more heroics from Signor De Gea. If we thought he came of age last season, how can we describe the string of world-class performances and miraculous saves that have bailed us out on so many occasions this campaign?

He has not only been keeping us in games, he has been winning us games. Glenn Murray was resigned to adding his name to a pretty exhaustive list of players who have found De Gea to be this impregnable force at times. His last three games were risible imitations of the standards he has set this season, but he was back to his best on Saturday. He had to be. How many of you had written off that Murray chance as a certain goal? Me too. What an unbelievable save, Schmeichel esque in stature and execution.

I genuinely believe that, regardless of how the contract talks pan out, De Gea will be revered in equal standing to the recent, modern greats of Schmeichel and Van Der Sar. Such has been his transformation. Could anyone have imagined his rate of development, not only in terms of ability but also physicality? That scrawny, bumfluffed lightweight who wore the kit as a sleeping bag has become a commanding, world-class all-round keeper. Where is the pen and paper, Woody?

Now the top 4 is all but assured, we will get a clear indication of where his head is at. He has the platform to achieve everything he wants to here: Champions League football, the unconditional adoration from the fans who stuck by him in the most trying of times and a guaranteed spot in the team. I recognise the lure of your homeland as a foreigner must be tempting, I was there once studying abroad- I was counting down the days truth be told- in need of home comforts.

But would the former Atletico man be accepted like he is here at the Bernabeu? The hissing and bile at every error he would make? They turned on Casillas, Mr Real Madrid, who is to say Dave would be immune from abuse, even as Iker’s supposed heir apparent? He is loved at Manchester United, would he want to jeopardise that, knowing that with a few additions we will be on the launchpad to a title challenge? Dave knows our wish- a chant on the terrace can now be heard ‘David De Gea, we want you to sign’. Even with his broken English, the message will resonate clearly. Sign him up, Woody!

Someone who has put pen to paper is PSV’s departing wonderkid Memphis Depay. We will look back on this week with great fondness once it has properly sunk in- a double dose of Scouse busting- piping them to the Champions League and one of Europe’s hottest talents. Though, Brenda is adamant they never wanted him. Like the girl you pined for in college who turned you down, she wasn’t all that, obviously.

Now then, a stunning talent who is wet behind the ears yet plays with a certain arrogance on the left wing, cuts in and scores goals, including free-kicks will be plying his trade at Old Trafford, sounds a little familiar doesn’t it? Depay scored his seventh free-kick of the season for PSV on Sunday, taking his overall haul to 22, it is hard to tame the excitement.

That is one thing we are guilty of. What we cannot be guilty of is expecting Memphis to become the next Ronaldo at the click of a finger. Let’s not draw comparisons, let Memphis be Memphis. We should allow him the bedding in period he will require, whilst letting him enjoy his football. Let’s not become dogmatic through rigidity and eliminate the enjoyment and natural talent through tactical mindfucks and raised expectations.

That is all for the future, now is the time to savour the fact we have secured one of football’s hottest properties. He will be working with someone who knows how to best utilise him and transfer all that promise into spectacular results on the field. He will, in time, add pace, flair, goals and a genuine threat over a dead ball. I, for one, cannot wait to see Memphis donning the red shirt of United and seeing his talent develop into, hopefully, a world-class end product.

With Champions League a nigh-on formality, we ought to go out in style against Arsenal and seek revenge for that dismal FA Cup exit. To avoid a testing early season qualifier, we really need to be beating Wenger’s men, after all they must be gutted we have robbed their fourth place trophy, it’s only right we give it them back, right?

One response to “Rowlesy’s Ramblings – Relief, Champions League, Louis sign him up and Memphis”