The Belgian is better than any player in the Everton squad, according to Football Fanager rankings

Former Everton midfielder Marouane Fellaini has performed better this season than every member of the Toffees’ squad, according to leading fantasy football manager site Football Fanager.

The attacking midfielder has amassed 91 Football Fanager points in just 22 league and European appearances. Of his former side, only Steven Naismith and Romelu Lukaku can match that total, but they have needed six and nine more games to get there respectively.

Manchester United travel to Goodison Park on Sunday, and the overall picture doesn’t make good reading for Everton fans. United’s top performer Wayne Rooney has accrued in excess of 40 points more than the hosts’ leading pair. He’s now on 136 points, thanks in the main to his 12 goals and five assists. There are a further seven Reds on more points that Naismith and Lukaku.

Belgian international Fellaini won’t need motivation this Sunday. In the corresponding fixture last season, he was an unused substitute for a match which turned out to be David Moyes’ final game in charge at United. Then, when the teams met at Old Trafford in October, he warmed the bench again before managing just 11 minutes on the pitch.

However, over the course of this season, Fellaini has found eye-catching form and can expect to start at the weekend. He has netted five times and been on the victorious side 14 times – that’s an impressive 64% win rate. Plus, he represents good value-per-game, averaging more than four Football Fanager points per appearance, which again betters anything Everton can muster. Naismith top performs for the home side with an average of 3.5 points per game.

United have also had the luxury of squad rotation to keep their players flesh. Aside from ever-present David de Gea (on 33) and star striker Rooney (29), Everton’s players make up six of the top eight when it comes to match starts. Phil Jagielka (32) is the most played outfielder likely to feature on Saturday, with Seamus Coleman (29), Leighton Baines (28), Gareth Barry (28) and Lukaku (27) not far behind. Tim Howard (27), Robin van Persie (24) and Antonio Valencia (24) make up the top 10.

While the home side do have players that can cause United problems – goals have tended to come from Kevin Mirallas (6), Naismith (7) and Lukaku (8) – they’ll have their work cut out if they’re to fend off a United side looking to confirm that coveted Champions League qualifying place.

Marc Saba, co-founder and director of Football Fanager, said: “Marouane Fellaini was useless last season, but under Louis van Gaal he’s back to the form he was in for old club Everton. His Football Fanager ranking is better than any of The Toffees’ squad and I bet Roberto Martinez wishes he was back at Goodison Park wearing blue rather than red.” 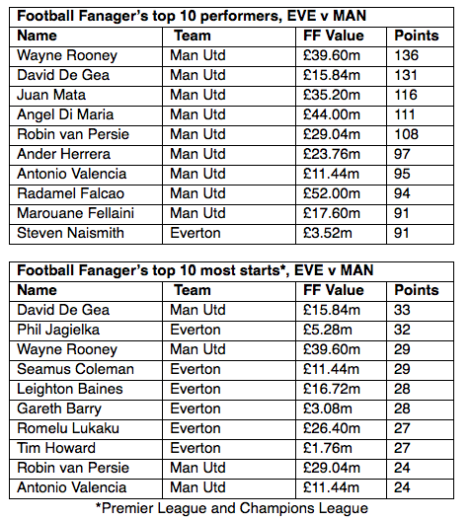