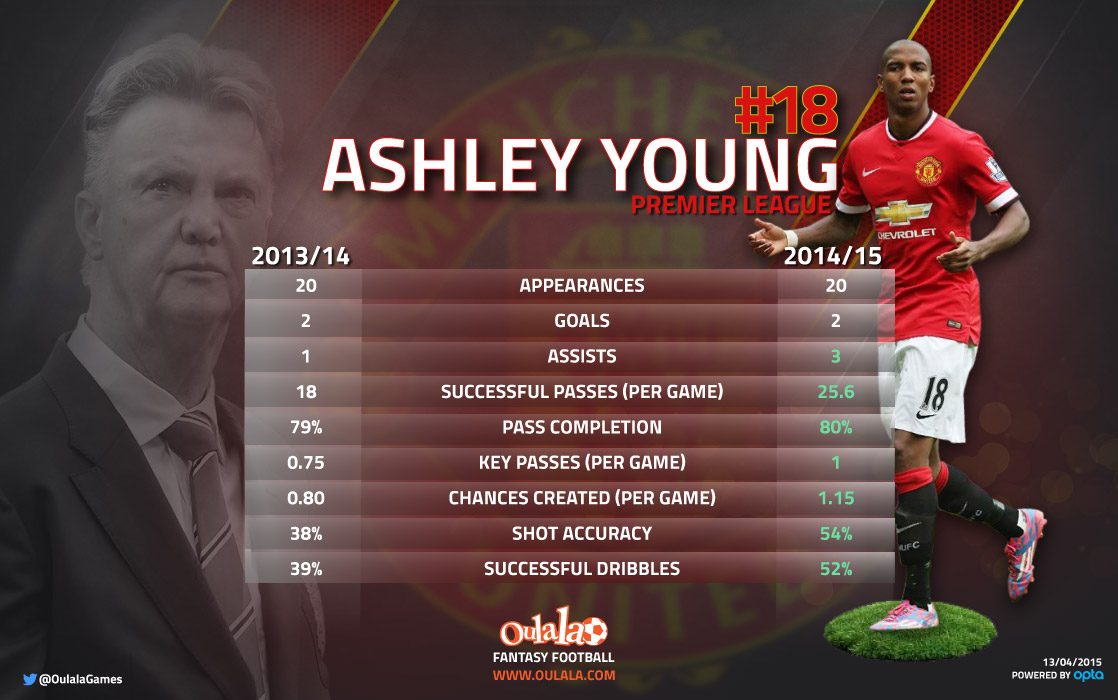 Manchester United’s 4-2 demolition over rivals Manchester City on Sunday saw one player put in his finest performance in a United shirt. Manager Louis van Gaal was quick to say “I think Ashley Young was the man of the match. He was very good. He was involved with the first three goals – very important goals. He did his job as a left winger.”

It was the first time since March, 2012 that Young had scored and assisted in the same match (Tottenham) and it was also the first time since the winger has registered two assists in a Premier League match since August, 2011 when United beat Arsenal in the famous 8-2 annihilation.

With Young seemingly back to his best, Opta-powered fantasy football game www.oulala.com crunched his numbers after he completed his twentieth appearance, the same number of games that he completed in total last season to see how much of an influence new boss Louis van Gaal has had on the vastly improved winger.

Eight key areas were analysed and the results conclusive. The progress made by Young in the last 12 months has been staggering.

The 29-year-old’s passing stats have risen in every area. Young is making more successful passes per game under van Gaal (25.6 to 18) and has also improved his pass completion from 79% to 80%.

Creatively, the winger is excelling further under the influence of the Dutchman. With more key passes per game (1 to 0.75), chances created per game (1.15 to 0.80) and assists (3 to 1), van Gaal is squeezing out every drop of talent Young possesses.

The winger has completed a significantly higher percentage of dribbles this term (52% to 39%) and although scoring the same amount of goals (2), he has in-fact enjoyed a notably better shot accuracy (54% to 38%).

Young has started each of United’s last six Premier League games, United have won all six, including victories over Manchester City, Liverpool and Tottenham. Coincidence? Ashley Young is proving to be back to his very best.