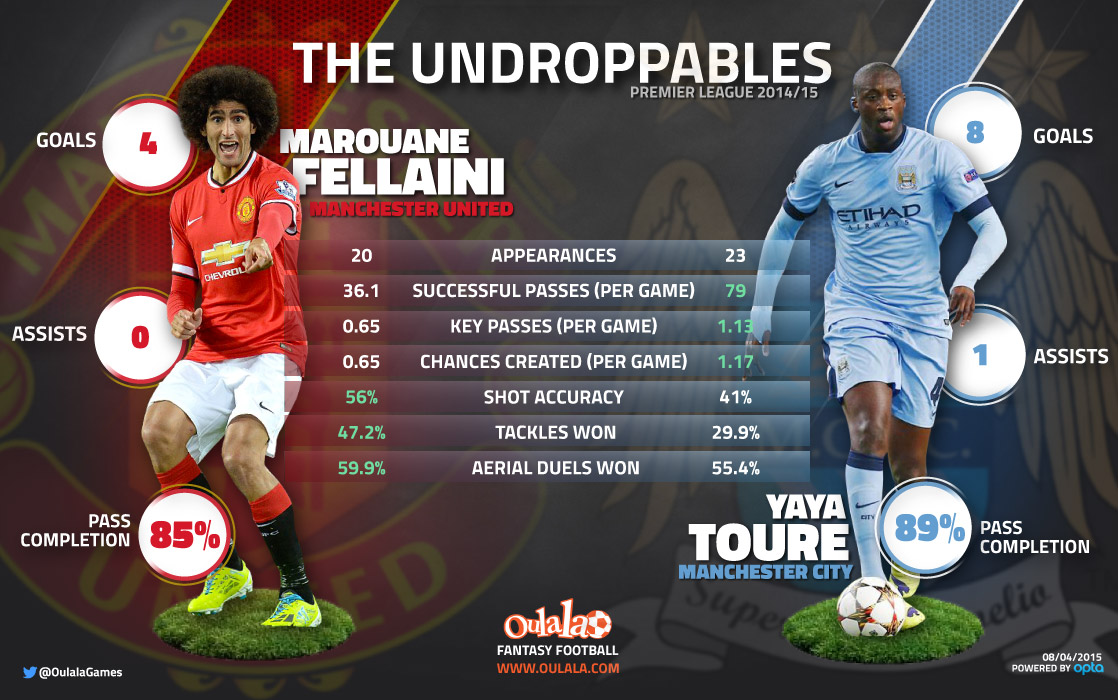 Manchester United midfielder Marouane Fellaini was described as ‘impossible to drop’ by manager Louis van Gaal and has been widely praised from all corners this season after some fine performances. On the other side of Manchester, City talisman Yaya Toure has appeared to have had a somewhat flat campaign and recently attracted criticism from Jamie Carragher for his effort and commitment towards his team’s title push. Similar players, however differing opinions.

With the midfielders about to go head to head in Sunday’s Manchester derby, www.oulala.com decided to take a closer look at the pair to discover whether the praise Fellaini has received and the criticism Toure has faced is fully justified.

The data shows clearly that Fellaini is the more physical player with Toure the more technical. The Manchester United midfielder has won a far higher percentage of tackles (47.2% to 29.9%) and also edges duels aerially (59.9% to 55.4%).

The Belgian also holds the better shot accuracy (56% to 41%). However, of the nine key areas analysed the 27-year-old only leads for three.

Toure has proved to be much more productive this season than Fellaini scoring more goals (8 to 4) and providing more assists (1 to 0), also enjoying a better pass completion (89% to 85%) with far more successful passes per game than the Belgian (79 to 36.1). In-fact, the Ivorian leads the entire Premier League for successful passes, on average nine more passes per game than Chelsea’s Cesc Fabregas and a remarkable twenty more than teammate David Silva who sits third overall.

In summary, Fellaini’s improvement is clear since last season and the praise seen more than warranted however the criticism aimed at Toure is clearly unjust with the Ivorian making strong claims to be just as undroppable as the United man. The clash between the pair should be interesting.