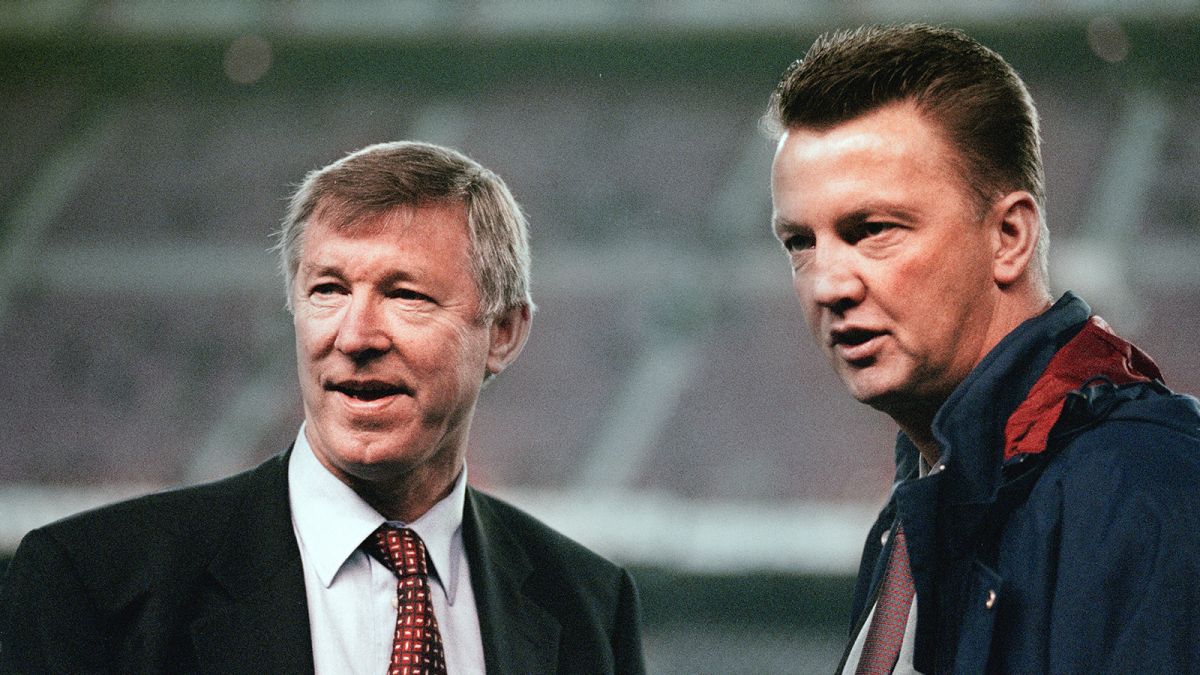 In a parallel universe, a teenage Louis van Gaal, sitting at his computer, unashamedly saves his game. He returns from holiday to find his United side have beaten Tottenham 3-0. Juan Mata is deemed to have made the difference, with ‘a well-placed Michael Carrick header adding to Marouane Fellaini’s blistering run and finish.’ He never speaks of it again.

You could have sailed a ship into the ‘Keown Triangle’ last Sunday night, and it would have vanished without a trace. These chasms of space may well have been of Dutch design, but Martin Keown’s sincere attempt to depict United players’ increased availability in possession on Match of the Day 2 did seem a stretch, especially when – as many fans did with a creepily ravenous glee – you take into consideration that nearly every triangular example was infringed by a defensive Tottenham player. Truth be told, the last time the former Gunner reached that far he received a three-match ban for ‘arming’ Ruud van Nistelrooy in the back of the head.

The year is 2045, and Stephen Fry’s clone has taken over QI presentation duty on BBC. “What on Earth went on at Manchester United in the 2014/15 season?” he asks. A feeble Alan Davies tentatively raises his ‘Nobody Knows’ card. He earns 50 points to rapturous applause.

The one man who will at least have convinced himself that United’s consistently topsy-turvy displays are explainable is also the only man who, for the most part, refuses to explain them; Louis van Gaal will likely reference one of his more treasured concepts, “the rat race,” while he mirrors any question about United’s glaring shortcomings upon whomever he perceives to be his accuser.

Embarking on his second spell in charge of Barcelona at the beginning of the 2002/03 season, Van Gaal told national newspaper El País, “Football is a team-play of eleven players, not one. I like stars, but Rivaldo or Ronaldo are not stars. To me, stars are Keane, from Manchester United; Beckham, because he plays for the team; and Zidane, from Real Madrid.

“All players must be at the service of the group. A lot of players think they are stars, and this is a problem I’ll try to solve; and if the affected player is not open to corrections, then he is out.”

The Dutchman’s emphasis on the paragon of all-round team contribution manifests itself best in his decision to appoint the oft-maligned Wayne Rooney as United captain; Rooney will never be the ‘star’ that England deserves, but he is the one Louis van Gaal needs right now.

With one of the masterminds behind baseball’s ‘Moneyball’ phenomenon set to take an advisory role at Van Gaal’s former club, AZ Alkmaar, it’s worth noting that the experiment-turned-sacrifice of deploying Rooney in central midfield was brought upon by Louis van Gaal’s own numbers-based outlook within a footballing context.

The Dutch master’s insistence on playing at least four defensively capable players in his team – regardless of formation – has almost always seen him utilise a central trio of midfielders when opting for four at the back, with each midfielder responsible for varying facets of the game. Traditionally fundamental to most of his gameplans, injuries and lack of suitable personnel have thus far prevented the United manager from establishing this ‘system within a system,’ during his eight months in the Old Trafford hot seat.

The archetypal spine of a Van Gaal side has always began with a deep-lying midfielder, whose predominant duty is to regain and recycle possession; Edgar Davids at Ajax. Pep Guardiola at Barcelona. Marc van Bommel at Bayern. So, Daley Blind at United? For now, sure. The versatile Dutchman has, along with Marcos Rojo, been Van Gaal’s most consistent acquisition. It is, however, common knowledge that Blind was never the club nor Van Gaal’s ‘Plan A.’

Injuries to both Rojo and Luke Shaw saw the Dutch all-rounder once again prove his worth at left back during last Sunday’s impressive 3-0 victory over Tottenham at Old Trafford, with fit again Michael Carrick slotting in ahead of United’s central defence and impressing. The manager’s admiration for “trainer-coach”-like Carrick’s calming influence on teammates is obvious, but it remains to be seen whether Carrick – or Blind, for that matter – will be entrusted to anchor United’s midfield on a permanent basis next season.

The most integral component of a typical 4-3-3 Van Gaal midfield is the slightly more advanced box-to-box general, expected to contribute with both attacking creativity and defensive prowess in equal part; Clarence Seedorf at Van Gaal’s Champions League-winning Ajax. Philip Cocu, who scored 12 goals during Barcelona’s ’98/99 title-winning campaign, but was hailed for his leadership and reliability. Sebastian Schweinsteiger, who again epitomised this role at Bayern.

The corresponding position within United’s formation has yet to be nailed down; Despite Sunday showing him to be evidently traumatising when in full flight, Marouane Fellaini can hardly be considered a suitable back-and-forth merchant. Ander Herrera has generally been deemed too defensively irresponsible, and more suitable to an advanced midfield role – hence his positional rotation with both Mata and Fellaini last Sunday. Record signing Angel Di Maria is yet to settle in Manchester, not to mention a midfield position. And lest we forget Wayne Rooney, who despite his best efforts, contributed little more in his transition from striker to midfield than proving that there really is only one Paul Scholes.

Van Gaal’s final central midfield installment has always been a typically creative no. 10; Jari Litmanen. Rivaldo. Thomas Müller. With Juan Mata failing to nail down his favoured position and Wayne Rooney now leading the line, United’s home fixture with Tottenham saw Louis van Gaal instead opt to dovetail his entire midfield; Fellaini was trusted to push forward in possession, and dropped deeper as United retreated. Juan Mata – pushed slightly to the right where he was deemed ineffectual under Van Gaal’s predecessor – interchanged neatly with his compatriot Ander Herrera, at times producing some wonderful link up play.

It’s only taken eight months, but the Tottenham victory was the first signal that Louis van Gaal might finally have found a way to paper over what he perceives to be crucial positional cracks in his side’s makeup.

Mata’s slightly overstated outing on Sunday was perhaps the first time this season that he has been provided with even a semblance of mobility ahead of him; when viewed within the continuum of United’s season, Wayne Rooney’s decision to actually physically move in the final third was groundbreaking. As Tottenham’s subsequently unsettled defenders were pulled out of position, Mata’s positional wizardry became more and more evident. The classy Spaniard began to resemble the artistic creator United signed him to be.

The playmaker’s instant reinvigoration under his Dutch manager is a curious one. Starved of football since the beginning of February – this despite a seemingly everlasting string of sterile United displays – never seemed discouraged, and his rather sudden return was synonymous with United’s best performance of the season.  This ‘turn it off and turn it on again’ approach will likely produce similarly productive results from Falcao when he scores 24 league goals for Valencia next season.

Where the once-talismanic Colombian has failed all season, his captain excelled on Sunday; Wayne Rooney’s movement opened spaces, allowing United’s tempo to drastically increase. Incidentally, Juan Mata gave the ball away rather cheaply on five occasions. Nobody cared. For the first time under Louis van Gaal, everything clicked.

In a week where Ireland accidentally legalised close to 100 recreational drugs for 48 hours, seeing Marouane Fellaini’s explode through the Tottenham rearguard before firing a left-footed finish past Hugo Lloris was, by a distance, the most surreal experience. The sight of the Belgian’s elbows flailing joyously, uninhibited by another man’s jawline, was haunting. Manchester United were suddenly finding pockets of space in the final third, forcing me to question my whereabouts earlier in the week.

‘The old United?’ Perhaps not quite. If Sir Alex Ferguson was a God, Louis van Gaal is a scientist. But the Dutchman’s much-maligned philosophy consists of more than reliance on his system or a given formation; it encompasses his overall approach to man-management, and the trust he puts upon his players in his delegation of various duties.

Ashley Young’s bizarre Indian Summer has come as a surprise, but perhaps it shouldn’t have. Young’s performances are merely indicative of his responsiveness to a more instructive management style- last seen under Martin O’Neill’s tutelage at Aston Villa. Once the leading cause of premature baldness in Manchester, a reinvigorated Young is now the definitive beneficiary of ‘The System.’

The key focus during Van Gaal’s reign seems to be consciousness over instinct; a scientific approach to win each game with a collective team effort. It’s not that individual inspiration is discouraged, it’s that it’s purely circumstantial, and therefore not to be relied upon.

Young’s teammates, not least Herrera, Fellaini, and now Mata, have followed in Wayne Rooney’s footsteps and shown a willingness to adapt to their manager’s requirements; Van Gaal at least trusted them enough to tweak his quintessential midfield machine- or the 2015 United prototype at least. That trust alone, along with the subsequent performance and result, could be considered the first legitimate sign of United progressing under Van Gaal.

As Stretty News’ Paul Rowles suggested on Monday, the penny may have finally dropped at Old Trafford. The flip-side of the argument is that a number of players have yet to align with what they might consider an unprecedented shift in playing style; The likes of Rafael, Angel Di Maria and – perhaps most surprisingly – Robin van Persie, must adapt in order to survive at the club. If not, that critical sense of trust is non-existent, and another mass exodus simply extends what has already been a torturously slow transitional process.

With the ‘rat race’ about to heat up at Anfield on Sunday, we’ll likely discover whether last weekend’s 3-0 victory over Tottenham was a major step in Manchester United’s evolution under Louis van Gaal, or the latest in an 18-month series of false dawns.