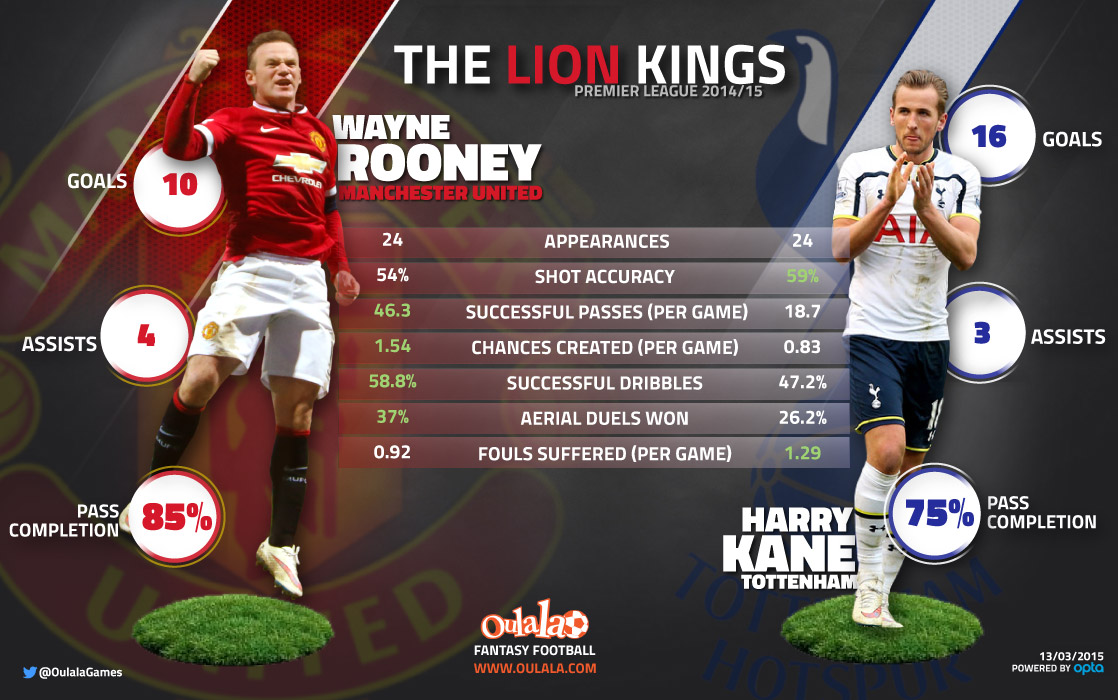 Tottenham face Manchester United on Sunday when they visit Old Trafford as both sides continue their race for Champions League qualification.

One of the hot topics this season has surrounded Harry Kane and his omission from the England senior squad despite the 21-year-old having enjoyed a highly impressive campaign.

With Roy Hodgson set to name his England squad next week, Opta-powered fantasy football game www.oulala.com took on the task of analysing the highly rated Harry Kane and England captain Wayne Rooney to discover how they have both fared in nine of the key criteria this season.

The most notable sign is how the pair share a healthy balance throughout with both players excelling in different areas and thus complimenting each other with Rooney’s effective creativity counterbalancing Kane’s impressive finishing.

As the leading English goal scorer in the Premier League this season with 16 goals, Kane currently sits just one goal behind Chelsea’s Diego Costa and Sergio Aguero of Manchester City. The Spurs striker has also enjoyed a very respectable 59% shot accuracy.

With Kane impressing offensively the attention moved to his opponent on Sunday, Wayne Rooney. The Manchester United captain’s game has revolved around productivity this season after being moved into a deeper role by manager Louis van Gaal. Rooney has made an average of more than 46 successful passes per game with an overall pass success rate of 85%. The 29-year-old has also created an average of 1.54 chances per game and has accumulated 4 assists this season.

The Manchester United man has also completed an excellent 58.8% of his dribbles and won 37% of his aerial duels. Kane on the other hand has been fouled an average of 1.29 times per game.

With both players performing at a high level in alternative key areas it is clear that the pair have the potential to form a deadly partnership at international level when Kane is finally handed the opportunity for England he undoubtedly deserves.