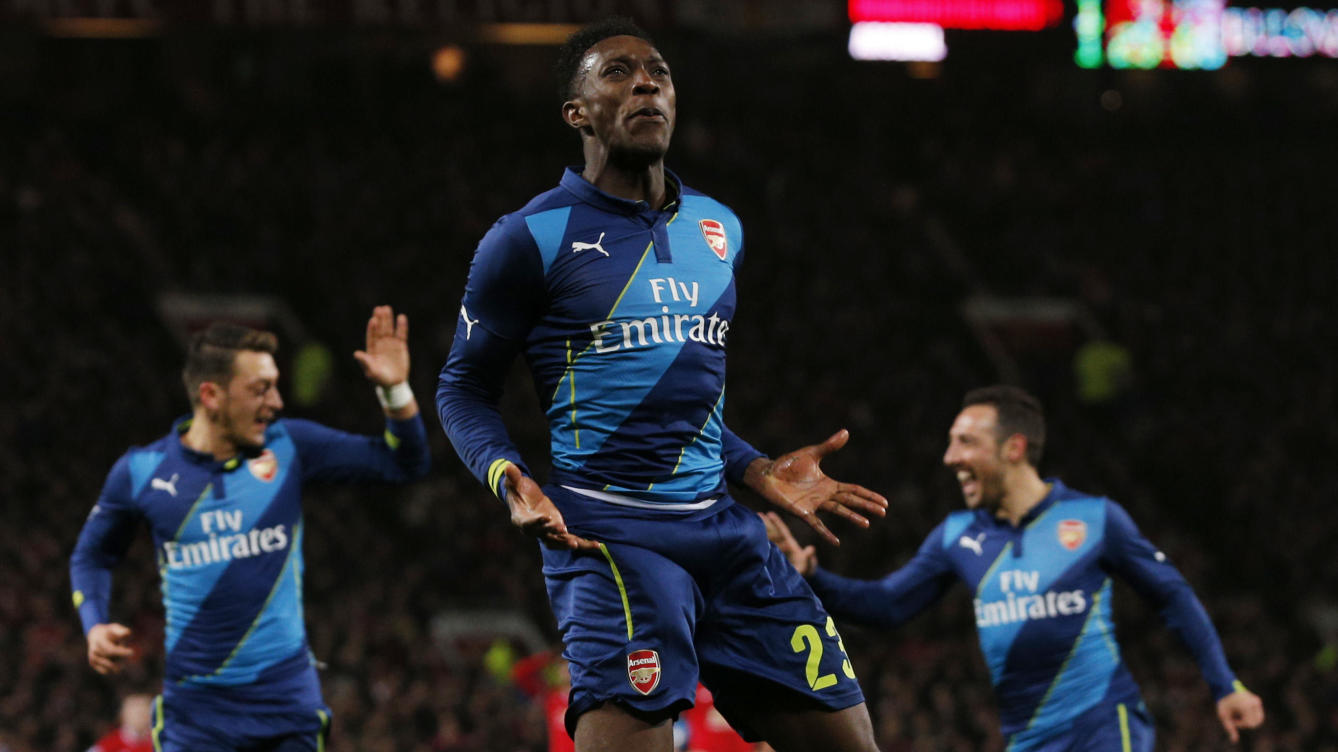 If Mystic Meg fixed her gaze on Monday night’s quarter-final at the weekend and predicted Arsenal would emerge victorious with the winning goal coming from Danny Welbeck, you would have had gut-wrenching feelings in the pit of your stomach- one of horror, one of inevitability. The worst nightmare. The local lad depriving ‘his’ club of the Wembley dream.

Welbeck, apart from capitalising on an horrendous gaffe at the back from Valencia, was largely anonymous which still makes the ‘I told you so’ clan’s argument that it was an aberration to let him go a bit hasty. The abiding, haunting memory of him bricking himself when one-on-one against the man-mountain of Manuel Neuer last season highlighted the fact he lacked the composure to take his game to the level required and expected of a Manchester United striker. He might yet prove us wrong, but how many of you were questioning the decision when we saw Falcao arrive through the door? Hindsight is powerful but too easy a route to go down.

As for the minority of fans booing the fact Welbeck celebrated his goal, did you expect him to miss an open goal in a quarter-final to knock his old team out? We did not show him an ounce of respect by chucking him in the bin, he has no right to respect us now. Everyone knows he’s a Manc who would’ve stayed his whole career with us if he could, he was a professional, doing his job. Besides, RvP went ape after scoring against them last season after deciding bollocks to respect if I’m getting grief. One way to avoid it would have been to loan him out, thus making him ineligible but hey ho…

The nature of that deciding goal has been on the cards for some time now. When the philosophy revolves around sterile possession between the goalkeeper and back four, an individual error in that area of the pitch always has the potential for costly repercussions. Especially as it’s glaringly obvious the centre-backs at our disposal look as edgy as spotty teenagers on a catwalk. When your centre-backs suffer from ‘hot potato’ syndrome, the build-up becomes slow, there is no confidence from the backline to start attacks and they are shirking responsibility- ‘you deal with it, I don’t want to lose it’. Until Van Gaal buys the accomplished ball-playing defenders who also do the bread and butter, the likelihood is teams will just sit in two banks of four and say to us ‘you break us down if you can’.

It is too easy to defend against. Arsenal probably marginally shaded proceedings, they have some cracking technically gifted players- Sanchez is the mustard and Santi Cazorla is a craftsman at what he brings to the table, but they are vulnerable defensively. You can get at them if you are incisive enough and clinical in possession with swift turnovers from back to front, but they probably walked off the pitch without coming under mounting waves of pressure. Hector Bellerin and Natxo Monreal were not sufficiently grilled for my liking- they are not exactly Dixon and Winterburn. Ashley Young and di Maria created havoc, but it was only sporadic havoc. We missed a trick in not getting at Bellerin while he was on a booking (more on that to come).

The referee came under intense scrutiny in the second half, and I am going to try and dissect what I saw in the flesh (without the benefit of a zillion replays) as impartially as I possibly can:

Hector Bellerin should have been dismissed. Booked in the third minute for a cynical tripping of Ashley Young, he repeated the dosage in the second half only to be reprieved. Inconsistency number 1.

Angel di Maria went down under minimal contact from Aaron Ramsey. There was the slightest contact but enough for him to spurn shooting in a dangerous position and to knock him off stride? Probably not. But why does it have to be a dive? Contact between players should not be black or white- a foul or a dive. When players are moving at such pace, there will be times when the slightest contact will be enough to derail a player. Surely it’s no less of a foul though?

That incident is another case, and probably not the last this season, of players feeling contact and getting punished for supposed ‘simulation’: Diego Costa at Burnley (conveniently refereed by last night’s official Michael Oliver) and Cesc Fabregas at Southampton immediately come to mind as two incidents wrongfully adjudged as conning the referee. di Maria likewise did not con the ref. That is my interpretation, you will have yours, I might be wrong. That does not excuse di Maria of doing what he did afterwards- that show of petulance crushed any momentum we were trying to build up. Ironically enough, Welbeck was felled by Rojo in the first half- enough contact for a penalty? No. Simulation? No. Inconsistency number 2.

Adnan Januzaj evaded Natxo Monreal and went down. The Stretford End bayed for a penalty. Another dive. Oliver once again got the yellow out but this one he got right, despite the uproar and anger that ensued. Lesson for you, Adnan- once you beat your full-back stay on your feet. He got into a great position yet chose to hit the deck in our most promising attack post-red card.

Just for your reference, Michael Oliver was also the referee in question when he allowed Joe Hart to virtually confront him head to head in the derby earlier this season. Is that worse than grabbing a referee? Absolutely. Is that classed as violent conduct? Yes. Did he get punished? Like hell he did. Inconsistency number 3.

You can accept referees making mistakes, there’d be nothing to talk about in the pub if they nailed every call. They are humans, they will make the odd howler, just like Valencia cocked up. What we ask for, as religious watchers of football, is for there to be consistency. To re-open an old can of worms- Ashley Barnes’ horror tackle on Nemanja Matic goes unpunished, yet Jonny Evans and Papiss Cisse are serving long bans for spitting. What is worse? The game as a whole will have a clearer conscience if consistency in decision-making exists: I know every ref’s interpretations will naturally be different, but the waters are very muddied at the moment, there are too many discrepancies particularly at this crunch time of the season.

That distasteful moment of madness from di Maria overshadowed what I thought was a big improvement from the performances he’d put in of late. The cross for the equaliser was vintage di Maria- the drop of the shoulder and inswing delivery from the right, that’s what we invested in. It was a sumptuous ball that was too inviting a chance to spurn. He looked like he was rediscovering some of the early season traits that made him a real tour de force. He gave us an outlet and came close to scoring twice, he looked reinvigorated and lively, he was trying things again and for the most part they came off.

The spotlight refuses to focus its attention elsewhere though. Granted, when you pay megabucks you expect fireworks and genius with every touch. The media are onto his slightest and every flaw, it’s nature of the beast. There seems to be this witch-hunt or agenda that di Maria will be the next Veron no matter how well he performs, everyone determined to christen the next expensive flop.

He will be out of the spotlight at the weekend which, as weird as it sounds as far as suspensions go, could benefit him. He can almost treat it as a fresh start and a welcome break from all the off and on field distractions as we approach this critical run-in. There was no excuse for what he did, at the same token people need to get behind him- because there are some pretty wretched demons out there trying to destabilise him and us.

Penny for your thoughts, signor Mata? di Maria’s suspension has potentially opened the door for the Spaniard to strut his stuff again. We look fluid and vibrant with him in the team, yet we insist on hurling missiles to Fellaini, who couldn’t trap a bag of cement last night and slowed down our attacks.

I’d have understood his selection had be played right up top, with Rooney withdrawn, enabling midfield runners to be the beneficiaries of his knock-downs. If his first touch was invariably losing possession, his second would be to commit a foul and not allow us to build up ahead of steam. He played where Mata would have flourished, in those pockets of space between the lines. His omission continues to baffle me. He is one of the few midfielders we have on our books who has the eye for a pass, who is forward thinking, who gets more than his fair share of goals. We all know Fellaini is a means to an end, nothing more than a Plan B and certainly not the answer long-term going forward. That he has salvaged a United career to a degree is admirable, we should not be even contemplating the same about the wizard with ‘8’ on his back.

The Tottenham juggernaut rolls into town on Sunday in a match with its importance cranked up a notch after last night. They are relentless currently, particularly on the road. Harry Kane and Christian Eriksen would have been licking their lips at the sight of our defensive train-wreck of a showing. Those two are on fire at the moment and can hurt us.

Hopefully the players are hurting as much as we are today and they repay us with a much-needed win. Sunday will be another chance for someone to deliver a telling physiological blow in the top 4 race, just like last night was.

With our gruelling away fixtures to come, we will need our form at home more than ever. It really is a must win match.