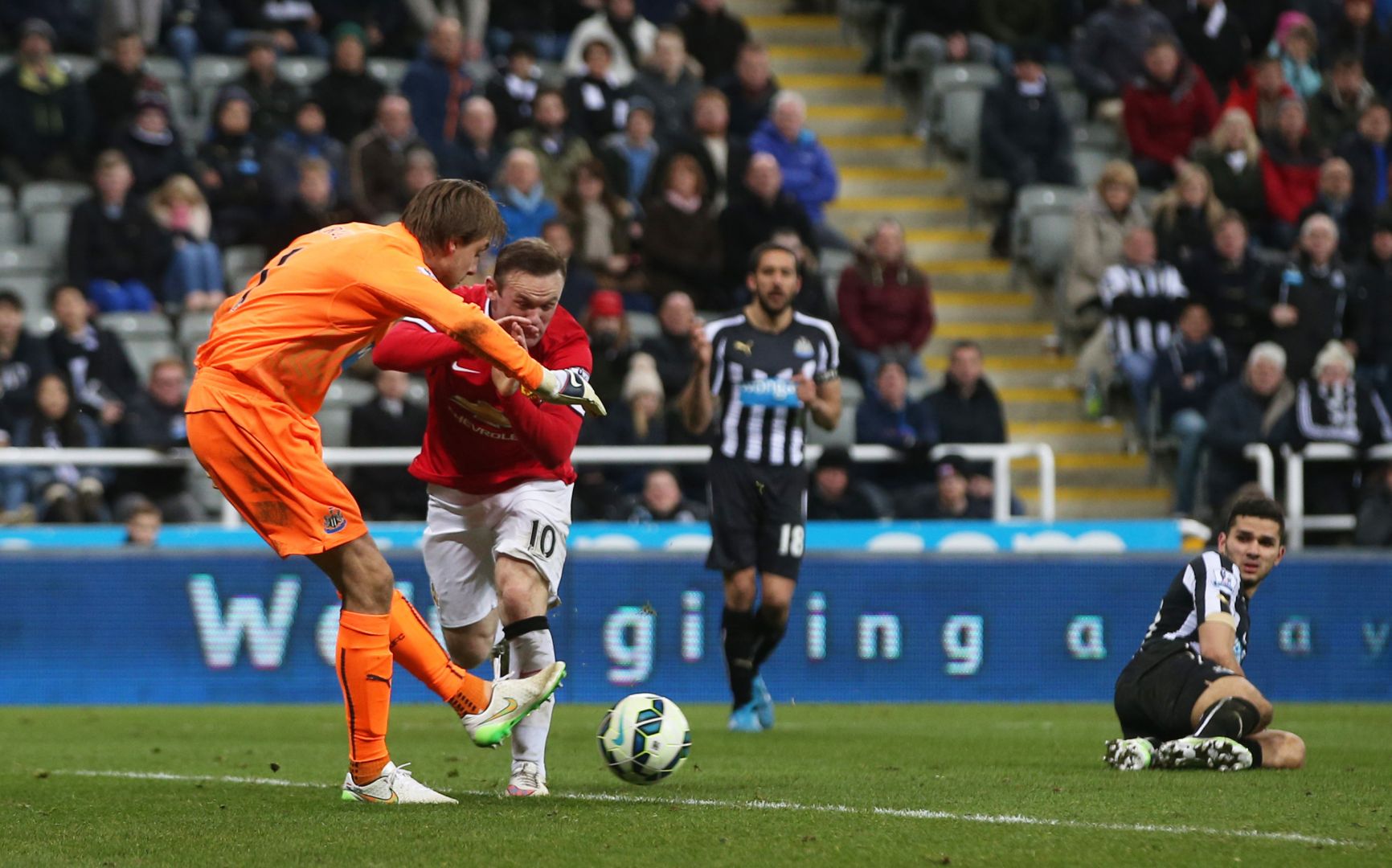 United traveled to Newcastle for a midweek fixture aiming to retain their place in the top four with an away win.

In: Fellaini.
Out: Falcao.

The game started with a relatively fast tempo from both teams and was littered with a number of individual errors, one main one leading to a good save from De Gea. However, you felt that United were not concerned with the threat from Cisse and former strike partner of Falcao at Monaco, Riviere.

Space was available but never utilized in the first half

There were a number of times when United worked the ball down the right hand side and fashioned space through neat combinations. This was when Valencia worked the ball to a certain point, Di Maria then received a pass and Herrera came from a deep position. As we can see in the image above Di Maria makes the wrong choice instead opting for the cross to Fellaini at the back post which we saw a lot of in the first half.

United enjoyed most of their possession in the down the right hand side although overall on the left the play had more coverage to it. United’s dominance down the right was helped by the narrow positioning of the fullback Taylor.

Rooney was struggling to make an impact in this half, industrious as ever but often isolated as strike partner Fellaini dropped deep.

Newcastle maintained their 4-4-2 which went to a 4-5-1 when defending with Riviere, of the front two, the one that dropped. Bringing the ball forward was Blind, Smalling or Evans and like in many other matches Newcastle was happy to let them do this.

A big decision came on the 59th minute when Di Maria was hauled off for Januzaj. The Argentinean did not look happy but what it did introduce was a greater inclination to take the ball down the line rather than cutting in. This meant Herrera had more space to attack.

Rooney looked a lot better this half although less involved than in the first resisting the urge to drop deeper than he had in the first and was playing on the shoulder, wrongly caught offside on one of the occasions.

On 81 minutes it looked like either team were unable to change things. Yet never afraid to do so, regardless of timings, Van Gaal brought on Mata for Fellaini. The Belgian had had a good game but more craft was needed to break down Newcastle’s solid two banks of four; a touch too little too late but nonetheless.

Then Carrick came on for Rojo and the all of a sudden BOOM! Atoning for his miss earlier in the half Young stabbed home a snatch of a goal which was borne from an increased tempo. Januzaj started it with a quick throw in which saw Guiterrez out of position and Newcastle’s defenders bunching and dithering. Rooney pressed and harried the defenders forcing them into a

Then De Gea showed equal class with a great save to keep it 1-0 to United.

Great save by De Gea

This was an unspectacular game which United pulled back from the brink with a late old school goal from Young.

The width worked well but there was not enough presence in the box to make it worthwhile even though there was the odd header from Fellaini.

The Belgian would have been better served keeping closer to Rooney to have had a greater impact.

De Gea made a number of standout saves  which Van gaal commented on, “They also made two big chances and I think David De Gea rescued us at that time.” he was right!

The avoidance of an eight draw on the road was a relief occasions although Van Gaal’s comment that, “I think we have dominated for 90 minutes, maybe our best match of the season” was stretching it a bit far but it feels good whatever the performance and with tough games coming up you feel that this team may raise their game against their main opposition.