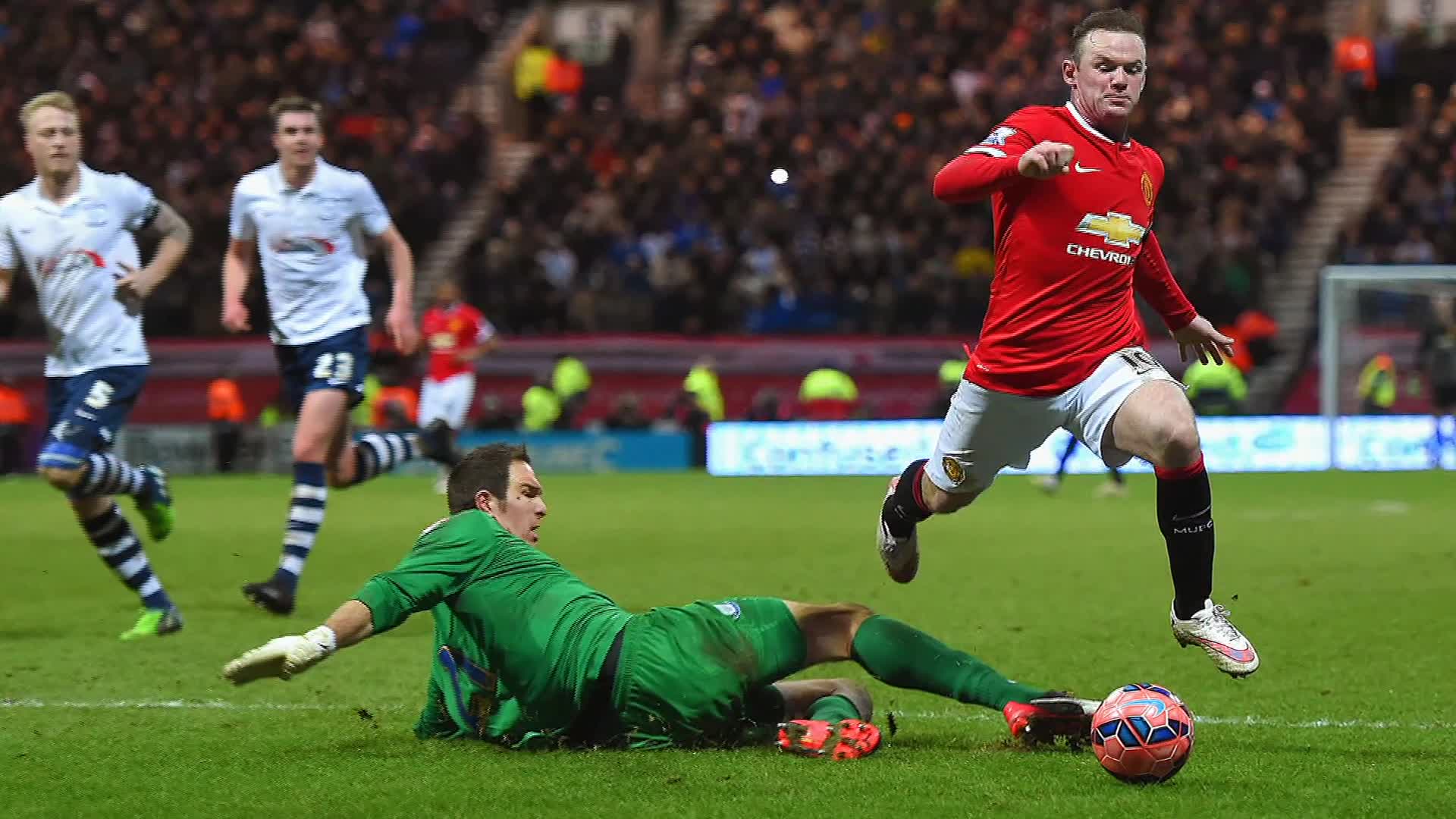 The FA Cup fifth round tie was certainly an eventful one, not so much because of a barnstorming United display as the performance was only a couple of steps above being as awful than a night out on Wigan Pier. The eventfulness surrounded Wayne Rooney, bane of my last few years as a United fan and so often at the eye of the storm with his barrel chest, balding head and part-time beer belly.

The outrage really took flight when United won a penalty to finish the game off, due to Preston goalkeeper Thorsten Struckmann lunging wildly at Rooney as he bulldozed into the penalty area. Struckmann himself was outraged, he shouldn’t have been; it was a thoroughly stupid challenge from a professional while his team were still in the game.

As we all know the penalty was converted to seal the game and in the end earn a creditable win during an FA Cup in which Premier league teams, including the top two, have been dispatched by lower league opponents with considerable ease.

It didn’t end there though, in fact the storm of lukewarm sewage has just begun.

The faux outrage was positively rabid and could barely wait for the full time whistle. Ex-Prestonian and pretend Irishman Kevin Kilbane decided to forgo any notions of impartiality as well as the Preston manager’s analysis and proceeded to rant about cheating or at least rant as much as an incredible personality void like Kilbane can:

It was akin to watching the world’s shittest cyborg prototype get stuck in a loop, his mind baffled by the notion of no contact or a dive but a penalty, or the Keown paradox as it can now be known. We can only pray the next time it happens Kevin’s head doesn’t explode in a barrage of wires, computer chips and sunflower oil.

Unmercifully, it still didn’t end there as football’s most pointless but unfortunately paid former players were lining up to take their shots on social. The likes of Mark Bright, Matt Le Tissier and most hilariously of all Stan Collymore, a man known for once punching his girlfriend in a bar, decided to get on some moral soapbox and declare Rooney a cheat, a charlatan and a future UKIP MP (I may have made some of that up.)

The fact is, the rules of the game declare Struckmann’s actions worthy of a penalty. Actions which, had Rooney made no attempt to avoid could have ended up with the Manchester United captain seriously injured. Still what’s a broken leg as long as Rooney is a good lad and we can all pat ourselves on the back that all Ingerlund players are as honest as the day is long?

Rooney has been guilty of diving in the past but this was not one of those occasions, as Phil Neville rightly said, Struckmann’s lunge was a legbreaker.

However it seems the BBC had made their mind up too; putting up videos about the greatest dives in football and Tom Daley rating them out of 10. You have to laugh. A bunch of people without an honest or intelligent bone in them talking about integrity and criticising a player for making sure he doesn’t get injured and getting the penalty he deserved from a clear foul.

The thing is, Rooney isn’t playing in an honest game, had Rooney stayed on his feet United never get that penalty despite the fact Struckmann committed a blatant foul. Yes Rooney could have stayed on his feet after avoiding contact but would get nothing, Rooney HAD to go down, he wanted to win the game. If Rooney lifts the FA Cup at Wembley in May, he can stick two fingers up to everyone.

These people, most of whom had careers as underachievers, passengers or players with no particular talent at all who could steal a nice living at struggling Premier League teams seem to long for a time that has never have existed at all. English football has never been honest, if players didn’t dive you had thugs rampaging around the field looking to take out the opposition’s flair players. If not that you had men like Nat Lofthouse who would literally break an opponent’s neck to win an FA Cup.

Good old salt o’ the earth lads, every one of ‘em.

These sub-par ex-pros and pundits who couldn’t win a man of the match award would do well to go back and watch Gary Neville’s nuanced and intelligent analysis on the subject of diving. Teams will always look for an advantage where it could be found to win matches, from Herbert Chapman’s floodlights to Bill Belichick’s balls, where the stakes are high, people will look for an edge to win. Wherever you are, whether it’s Deepdale, Wembley or the Houses of Westminster, we operate in shades of grey and elite sport is no different. If Kevin Kilbane wants his idea of honesty and integrity he may as well divorce himself from all human civilisation, clearly his brain already has.

In the end the outrage was so absurd that the likes of Phil Neville and Martin Keown looked like some intelligent, lone realist voices in the ignorant black void, both of whom are usually tremendous contributors to that void. More absurd still that the whole situation got me writing a nine hundred and thirty two word defence of Wayne Rooney! Civilisation has gone mad! Retreat to the bunkers and stock up on tinned food for the end of the world is near.