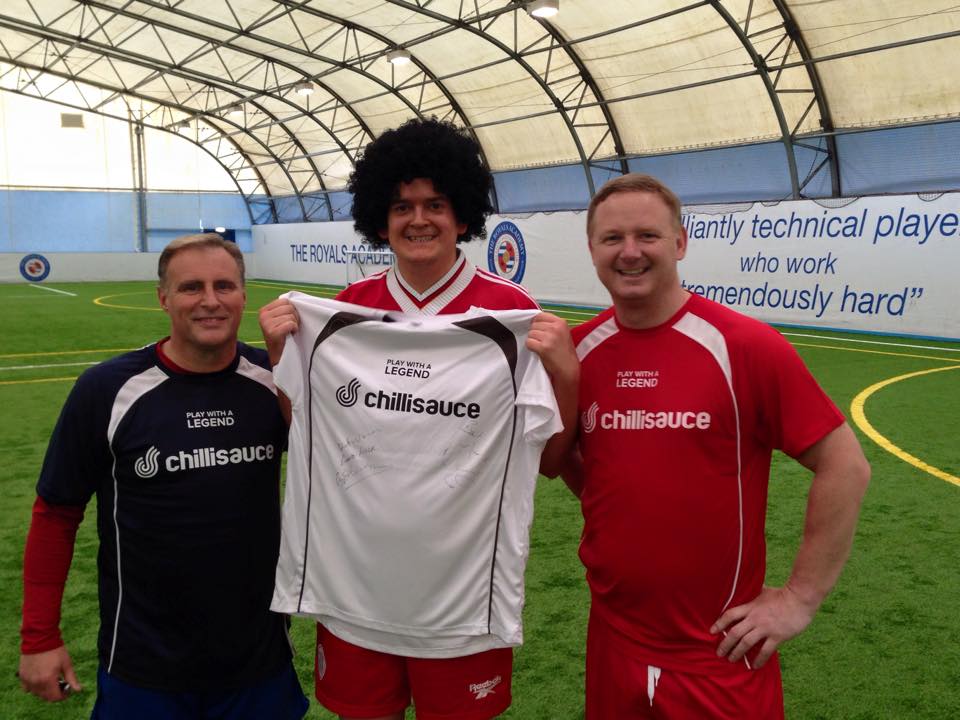 Our friends at ChilliSauce and Play With a Legend invited a member of Stretty News to play at Reading’s Madejski Stadium with ex-Manchester United players David May and Clayton Blackmore.

Unfortunately, I couldn’t make the trip with such short notice but asked Brentford FC scout and United fan Darren Russell to go and conduct a Q&A interview with May and Blackmore.

We look forward to working with ChilliSauce and Play With a Legend again.

We’re here with ChilliSauce and Play With a Legend for a stag do, what is the best stag you have been on?

David May: Probably my own, to Ireland. That was a good stag do. Can’t remember much of it. Belfast, Northern Ireland.

Clayton Blackmore: Probably my own, the first one (chuckles). All my mates back home strapped me to a lamppost. It was in Neath worse that Cardiff, a proper rugby town.

Out of the two, what would you rather win – the Premier League or Champions League?

May: Champions League to get over Liverpool.

If you had to pick one – Bruce or Pallister?

You’re both now at United in different role, Clayton you coach and David you do MUTV. How are you both enjoying these roles?

May: Love it, meet some great people on there. Boxing on Wednesday was really good.

David Beckham once claimed to perform sexual acts to Clayton’s calendar. Is this true and what is the best initiation you have seen?

Blackmore: Its true, but what you don’t know is somebody else did as well! We never used to do them when I was there until the Beckham initiation. I’d heard of it at other clubs but we never really did it at United. Dean Saunders at Swansea got boot polish on his nads. A few people ran round the pitch naked, but worse things happened at Christmas parties.

May: Usually the young lads at United would have to chat up a mop in front of this first team.

May: (gasps) Scholesy. I never played with Robbo so its got to be Scholesy.

Blackmore: (gasps) That’s a hard one, Scholesy is the best passer. I like Roy but Robbo was a better goalscorer.

Blackmore: I’ll go for Robbo because I played with Robbo.

May: Yeah brilliant, was just a great night to beat the Germans, to watch them celebrate in the final moments of the match waving to their fans and family and then Ole and Teddy score. Running up the line to join in the celebrations – fucking brilliant. Can’t remember much of the night to be fair.

And the same for you Clayton, 1991 in Rotterdam?

Blackmore: I remember the night, definitely a wet night.

May: What about the football?

May: Simon Le Bon tried to get into our party.

The best player you have played with and why?

May: (gasps) Cantona. Just brilliant, cool as fuck as well. And he could scrap as well.

Blackmore: And he could karate chop. But mine is Giggsy, just a wizard.

And the best you’ve played against?

Blackmore: Dejan Savićević the Montenegrin, he was good.

The best captain you’ve played under?

Blackmore: Unplayable. Did you ever play against Ryan?

May: Yeah a few times, never lost against United.

Blackmore: I used to mark Kanchelskis in training.

Who would you rather beat Liverpool or City?

May: Liverpool, all fucking day.

Blackmore: Got to be Liverpool.

What is the best pre-season you’ve been on?

May: Sydney/Melbourne after we won the treble, just a great time.

Blackmore: We had a funny one in Sweden. The manager burst in a few times on people. Colin Gibson had just had a knee injury in a game and he was dancing in the chalet’s and the manager is stood in the doorway. I’m in the toilet at the time I can hear the gaffer so I’ve hid in the toilets laughing. He’s [Fergie] gone fucking mad. I don’t think he liked him that much anyway. I waited until he’d gone there was no way I was showing my face we weren’t meant to be out drinking but Strachan had the old big bottles as it was so expensive over there, £30 for a round of 3 people ridiculous.

Who would you say United’s greatest ever signing is?

May: Got to be Cantona hasn’t it?

Finally as we are at a stag do, who can down a pint the quickest?

May: Me, all fucking day.

Blackmore: He can get two down before I can get one!