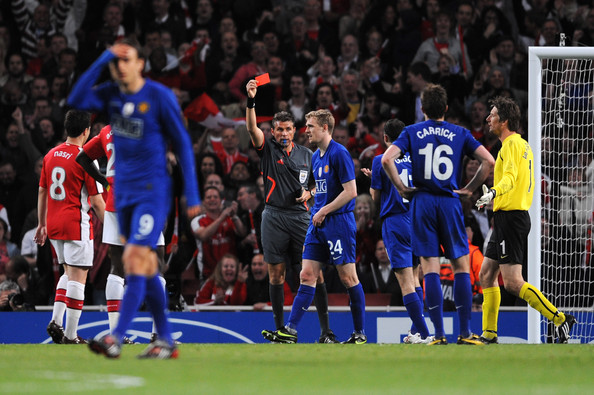 As Darren Fletcher packed his bags for the Baggies, the Twittersphere rejoiced and recounted his telling contribution in a United shirt.

A shortened Old Trafford career due to his lengthy battle with ulcerative colitis, the Scotland international departs having won league titles and league cups to go alongside a Champions League, FA Cup and Club World Cup. Not a bad career, really.

Yet there are still many that claim his success is more a result of his Scottishness than of the player’s individual qualities on the pitch. They talk about ‘Fergie’s son’ as if he was Bebe-esque in ability and Anderson-like in chances given. It’s a view best used by those who watched him on a screen rather than from terrace.

Brilliant for United he was, but Bryan Robson he wasn’t. His debut against Basle in a dead rubber Champions League game in 2003 is amongst the best of any young United player in a generation. Composed, he complimented his energetic running style with an assurance that the likes of Kieron Richardson and Michael Stewart had shown they were incapable of ever being.

His emergence was not as smooth as that first display. He was played at away grounds, where his endeavour could be better displayed in games where United were up against it, as opposed to trying to force passes in front of an inpatient Old Trafford crowd. Nicky Butt and Roy Keane’s careers were at an end, if you weren’t that good, then United supporters didn’t want to know.

He persevered. A performance against Patrick Vieira in the FA Cup semi at Villa Park effectively ended Butt’s stay at United. He did the running for Keane that day, doubling back as Ronaldo dazzled to the right of him. That performance should have been the blueprint for him to carry on, but it wasn’t till a few years later that he became the player he showed a massive glimpse of becoming on the day Amberley House won the National, and Arsenal’s treble dreams died.

Perhaps it was indicative of the way that he shadowed Vieira that day, that he would often operate in the shadows of others. People still talk about how amazing Hargreaves was in 2008. Fletcher in 2009 was better. Trusted to step into the whole left by a binge eating Anderson and a constantly crocked Hargreaves, Fletcher truly emerged in the 08/09 season.

In a 3-0 victory over Chelsea shortly after Rafa started cracking up, his running for Ryan Giggs inspired a United performance that hadn’t been seen since the run up to Moscow eighteen months before. It became the trusted tactic for United in big games. Towards the end of that season, an energetic midfield became as important as the Ronaldo led attack. At Arsenal, a game which would perhaps ultimately define Fletcher’s career, it clicked perfectly.

A United defence packed full of experience were protected by a trio of Fletcher, Carrick and a Brazilian benefitting from having legs alongside his own. Up top, Ronaldo bullied Arsenal whilst Rooney and Park operated in wide areas completing a line up that I believe was constructed for one reason; to beat Barcelona.

Arsenal that night in 2009, was the dress rehearsal. Barcelona were likely to await the Reds in the final as they looked to retain the Champions League, becoming the first club to do so. In the final minutes of that rehearsal, Fletcher saw red for a tackle on Cesc Fabregas. There was no need to tackle the Spaniard. The decision to do so was described as a sign of his naivety and his professionalism. Both are correct.

Fletcher would miss the final in Rome. A brilliant display cut short through bad luck. Like I’ve said, a game which summed up the lad’s career.

United were fed to the lions in the Olympic Stadium. At least that’s what the back pages read the next day. But Fletcher’s absence was not properly accounted for. No, before you all hammer away at the keyboard, I’m not saying “Fletcher plays – United win”. What I’m saying is that against what Fergie called Barca’s “passing carousel”, Fletcher’s role would have been critical. Uniteds’s solid midfield trio was disbanded. Ryan Giggs played alongside Ronaldo as opposed to alongside Carrick and Anderson who looked around dizzily as Iniesta and Xavi overran them, playing wall passes into Eto’o and taking away United’s chance of history.

Fletcher would have helped. He would have been able to be the body that matched up their midfield three, Ronaldo up front on his own would have been more dangerous without the extra defensive midfielder doubling up. The Tevez plan B may still have been needed, but not at the midway point in the game as it was that night.

But we’ll never know. His illness robbed him the chance to seek revenge at Wembley a couple of years later. His form in the aftermath of Rome and before he came sidelined through poor health was exceptional. If Rio Ferdinand hadn’t cocked about in added time, the “greatest derby ever” would be remembered for Darren Fletcher.

Unfortunately, like a lot of his accomplishments, it gets suppressed for sympathy. The character he showed in returning to the first team was met with a testimonial like applause instead of a heroes return. He was still fit enough and playing well enough to take his place against Bayer Munich last year, probably his biggest personal accomplishment, considering where he’d come from medically.

He’ll depart with the clubs best wishes and there’ll be plenty of “Darren Fletcher – Football Genius” coming from the Stretford End when West Brom visit United in the spring. When you assess his footballing commitments rather than his fightback from illness, it is hard to buy in to the ‘Fergie’s son’ favouritism debate. In April 2004, Fletcher saw off Nicky Butt in the battle for Keane’s midfield partner. He will never be perhaps thought of in the same way as Nicky. The lack of a Class of ’03 could account for that. As could another fact, Butt was able to benefit from suspensions in a European final v Bayern, where Fletcher couldn’t be there against Barcelona because suspension.

Lacking in class, or medals, is something you can never accuse Darren Fletcher of.