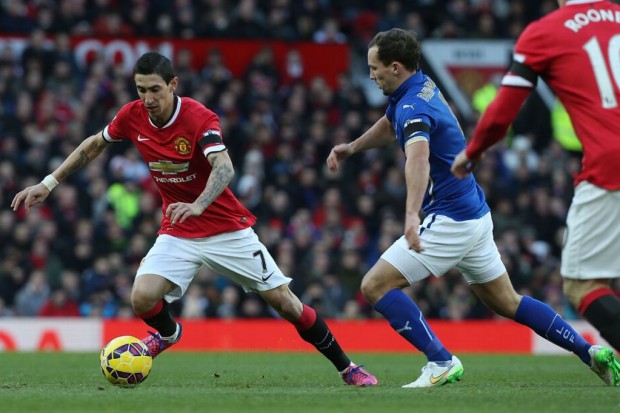 There is nothing more gratifying for a fan when you see your desired system reap the full rewards and getting your just desserts. Especially these days: when SAF was keeping Wrigley’s in business chewing his gum in eagle-eyed fashion in his seat, you knew you were safe in the knowledge that 4-4-2 was innately ingrained in the players’ systems and invariably we would get the job done at a canter. The long-standing association with Manchester United, passed over generations, was two flying wingers wreaking havoc by providing cutting-edge width, making the pitch big and providing quality service for our strikers to feast on. Be that Andrei Kanchelskis, Lee Sharpe, Ryan Giggs, Cristiano Ronaldo or even Jesper Blomqvist- that was the ‘P’ word that was our trademark.

So it was refreshing to see Louis Van Gaal embrace a rather big part of our DNA and revert to four at the back in a 4-1-3-2 system. Ever since Opta’s inauguration into the footballing stratosphere, statistics have overwhelmed and brainwashed even the most ardent supporters. However, you only need the naked eye to come to a swift conclusion- Louis Van Gaal’s United appear more swashbuckling and entertaining with more dividends with the tried and trusted of yester year.

I know what some cynics will say- ‘oh well United were only playing bottom of the league at home’ but you can only play what is in front of you. After slipping up earlier in the season to said opponents in an aberrant capitulation, Burnley and Sunderland to name a few, every win is welcome- especially with the race for 4th in all likelihood going right to the wire.

Having looked insipid and laboured against Cambridge, there was a restored balance, verve and intensity in our play. The cautious approach, in the first half at least, was replaced by the traditional United tempo, it looked like we meant business from the off. Daley Blind was absolutely outstanding on the day, at the base of the diamond, he always had his head up (in stark contrast to some justified critiques that he sometimes plays the no risk game a bit too much) and that was typified by the exquisite sand wedge to set up his fellow countryman for the opener. What a finish by the way from RvP- form is temporary, you know the rest.

Blind’s composed and masterful shielding of the back four enabled di Maria and Adnan Januzaj to have license to thrill. The wide duo possessed a mix of sheer pace, creative guile and trickery that Leicester found truly gargantuan to cope with. Their centre-backs lacked the pace to handle AdM cutting through the heart of the defence, epitomised by the second goal. That was the di Maria that would put fear into any defence in this league and took the Premier League by storm with that initial stunning impact. He had gone off the boil a bit since then, not helped by injury, but it looked like the shades of those stellar autumnal performances are returning now we are back to a diamond. His featuring on the left of the diamond was where he was on fire, ‘if it ain’t broke’ as they say. Hopefully the penny has dropped that he is NOT a second striker.

I thought both di Maria and Januzaj were excellent on Saturday: I’m chuffed for Adnan too. We all know his talent but equally he was on the periphery and simply did not fit into the 3-5-2. However, in this system he could well force himself into the starting XI on a more basis. There was, and still is, lots of conjecture about a potential loan but Van Gaal had previously vetoed any possibility of a move. Saturday’s performance will hopefully come as a confidence booster not only to Adnan (that he belongs here) but to Van Gaal too (that he can trust the player, especially with the lack of creativity with the back 3). If Adnan knuckles down, he can be anything he wants to be. Let’s hope he can build on the weekend’s game with restored confidence, as long as any advances today are knocked back.

I mentioned previously if Falcao gets the service, watch him go. Alright AdM didn’t exactly give him ‘service’ per se but I loved the tenacity and hunger to get into the danger area, where he is obviously at his deadliest. Although not exactly aesthetically pleasing, seeing him wheel away and the passion in the celebration made up for the scrappy nature of the second goal. As also said previously, there’s no-one I want to see do well more than El Tigre. One moment in particular warmed my heart- Wes Morgan was touch tight to him and turned it into a physical contest. Falcao gives as good as he gets too, he can dish it out, he withstood the pressure and bullied the big defender. He held him off, spun away and United were on the attack again in the blink of an eye. He is a throwback, old-fashioned striker in that he sniffs out chances and is the ultimate poacher but someone who works his bollocks off for the cause and relishes the rough and tumble of the physical side. He is like ‘Kettle neck’ in that respect, he plays like a fan. like each game is his last- heart on the sleeve.

His parent club Monaco have been drastically slashing their wage bill and rumour has it he will not be their player next season. Whilst it is common perception that the price settled in the original loan agreement seems somewhat extortionate, who is to say we cannot negotiate another loan akin to this year? My gut feeling is that we have to keep Jorge Mendes sweet in order to keep big Dave, if that means keeping Falcao (as you will know is also one of Mendes’ many clients) then it is something we will have to grin and bear. People will understandably say we should not be held to ransom, but it will be a much easier decision to vindicate if he carries on in Saturday’s vein of form.

Of course, it’s transfer deadline day today. A day best known for Jim White in uncontrollable hysterics- sheer pandemonium that St Johnstone have signed an unknown Croatian, suppose that’s what 12 Red Bulls needed for the long haul does to you, the gremlins crowded outside the Britannia and ‘Arry leaning out of his car window after a day of mad panicking and lauding his ‘fack off I’m not a wheeler dealer’ buys.

That whimsy may have understandably lost its novelty on United fans, who often feel they are being punished by our reluctance to shop in the reduced to clear aisle. There has been talk of last-minute bids for the likes of Laporte, Hummels and Marquinhos, however the odds of any of those coming off in a matter of hours, as much as Woodward’s little ego would get a proverbial boner off a last-minute coup of that magnitude, are hugely slim.

Rather than scratching pen in his cheque book, Woodward is likely to be sealing departures- the likes of Zaha, Powell, Anderson, Vermijl and Lindegaard could all feasibly move to pastures new before close of play tonight. That is just the word on Fleet Street, others could be packing their bags. Developing rumours were doing the rounds that Adnan might head to Everton on loan, but I’d be surprised if he went after Saturday and the fact PSG were stopped in their advances. But it is deadline day after all.

It’s a busy week for the club. I’ll be at Leigh Sports Village tonight for Fulham’s visit. Warren Joyce’s men secured bragging rights and maximum points against Liverpool last week and will be looking to build some momentum with successive home games to come. I’ll be back at OT on Tuesday for THAT replay. Saturday filled me with confidence that we can go on a winning streak and, to be frank, we will not have had a better chance in a long time, to end our FA Cup hoodoo and our upcoming fixtures are very favourable to get ahead of steam.

The draw, provided we finally beat our League 2 opponents, has been pretty favourable again, although both Preston and Sheffield United are two relative sleeping giants and Championship clubs in waiting. Two wins in two days for both United teams will be just the tonic before a testing trip to West Ham at the weekend.

Catch up with you midweek.