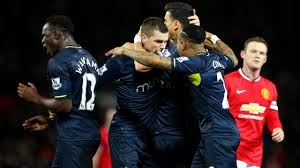 We had a major opportunity this weekend to put clear daylight between ourselves and the chasing pack. The majority of the Champions League aspirants stumbled, if we had beaten Southampton we would have had comfortable breathing space. Alas, we did not take advantage. There could have been no excuses either, Van Gaal, perhaps for the first time in his reign, had a virtually vacant treatment room with many of those previously ailed players making their comebacks. That was not a United performance you expect to see when you pay your money, it was completely underwhelming- just like the last few weeks truth be told.

Before I get into the heart of the performance yesterday, I have a couple of general gripes that I need to be got off my chest. Firstly, yes the result yesterday did not go in our favour, and we have no absolute divine right to just turn up and win, but I am sure some sections of our support genuinely believe that. It is a piece of piss to lend your backing and be vocally supportive when the team is winning, but for some sections to leave 10 minutes early is a plague of the modern-day fan and it’s bordering on embarrassing. Though I am generations away from the ‘it was better in my day’ brigade, I can easily relate to where they come from when they offer up that cliche. As soon as you mention those two words ‘Manchester United’, the immediate thought is that goal from Ole in Barcelona to clinch the Treble- a goal in the most dying embers imaginable. Late goals for our great club is as equal a lifeblood as our diehard supporters- we are famous for it. Yet minorities will still elect to do a runner so they can supposedly beat the traffic. Now I fully understand that there are travel constraints for some, who travel the lengths and breadths of the country to go to home games (which we get ribbed for constantly), but there is no better feeling than a late equaliser/winner and the last 10 minutes of United attacking the Stretford End is too good a potential adulation to not witness. Apparently not… The bailers missed the undoubted moment of the season to date- the euphoric RvP equaliser against Chelsea. It is moments like that that stay with you, but only if you are there to take it all in. So this is a plea to the early leavers- stick around! To have said ‘that’s enough’ when the going is not like clockwork is a dereliction and abandonment of support. We win, lose, draw together all as one, that is what sets our support apart. Some need to heed the message.

The other grievance is going to be a volley at the media. It’s fair to say they revelled in our adversity last season, Fergie was gone let’s make hay and give them twenty-six years worth of barrels that they daren’t have uttered under SAF. Every Moyes defeat was the empire crumbling and The Theatre of Screams and all that shit. Now, despite the fact the written media were unanimous in their verdict that United needed major investment to address the slide, they have a field day comparing the points tallies of Moyes and Van Gaal, which as you will know are identical after 21 games.

The argument that things have not progressed since last year may momentarily stack up numerically, but things have improved multiple fold from a year ago. Granted, yesterday’s performance was not a sound gauge to hold that belief, but at least there is a belief, style, and confidence in the manager this year. This was evidently lacking last year, so to compare Moyes and Van Gaal based on mathematics alone does not ressemble the facts. Seeing as the media get their wood off comparing positions and the hard numbers, let’s do some more analysis shall we?

Arsenal, whose 1 trophy in 9 years conveniently goes under the radar of the Fleet Street robots, are TWELVE points and FOUR places worse off than last season, before their standard Spring choke.

Liverpool obviously missing the, oh what’s the word…, bite of Luis Suarez up front are TEN points worse off and also FOUR places down from this stage last season.

Their Merseyside foes Everton are a humungous NINETEEN points worse off and SEVEN places adrift of their standing in 2014. They have capsized off their crest of a wave that Martinez instantly instilled, yet no-one bats an eyelid.

United, on the other hand, have not hit a slippy slope. As has become the supposed butt of all jokes, we are on the same points as last season yet THREE places BETTER off. And the media nail us because we followed up on their consensus that we needed strengthening and have changed our manager- a measure all the aforementioned did not have to resort to.

So in answer to these comparisons, there is an appropriate word. Behave.

Onto the football, which is not a marked improvement on the disposition created from that 800 words. Webby hit the nail on the head when he spoke to FullTimeDevils, that defence, namely the back 3 in his own words ‘scare me’. Bang on. With Van Gaal’s self-branded philosophy centered around ball retention and playing out of the back, it is clear as day that Jones and Smalling in particular are like fish out of water with the ball at their feet. They are awkward and uncomfortable playing this way. If you have this uncertainty as the build-up to your attacks, you are not going to build up ahead of steam and teams can just sit with two banks of four and be ultra organised. Southampton’s shielding duo of Schneiderlin and Wanyama barely broke sweat, at OLD TRAFFORD of all places, because they knew they had full control in there. There was not enough penetration or splitting passes to stretch the game out and create more gaps for the likes of Mata to exploit. The passing was sideways, laboured and pedestrian. Van Gaal moaned about it after the Yeovil game, yet we see a virtual carbon copy the weekend after.

One man who would stop the crab-like possession cannot make our starting eleven right now. What does Ander Herrera have to do to get a start? His goal to break the deadlock at Huish Park was a stunning piece of execution, and when he came on yesterday he buzzed around and provided the lift and fizz that our game lacked yet again. Rooney has done well there, don’t get me wrong, but he needs to be where it matters in the final third, not orchestrating the play- that is Carrick’s, Blind’s and Herrera’s roles in this setup. Hopefully Ander starts at QPR, especially on a tight pitch there you need decisive passing and that makes finding the gaps between the lines all that more important.

On another note, when will this back 3 debacle end? Without repeating what I said about the defenders, you may have an extra body in midfield but you lose out on natural width, something which we have prided ourselves on over countless years. Best, Sharpe, Giggs, Beckham, Kanchelskis, Ronaldo- the cornerstone of our modern-day success has been two out and out widemen in a 4-4-2. When we played against QPR and Hull, our two most polished performances of the season to date, that was the setup and we reaped the rewards. Di Maria was giving the injection from the left of the diamond and he opened up the game. Where he was stationed yesterday was akin to a typical away day setup, similar to the Arsenal game where he was more advanced to best utilise his pace on the counter. Essentially, yesterday we played like an away team at home, but Southampton did not spring out enough for us to effectively counter, which played right into our hands and nullified our main source of attack practically before a ball was kicked, especially with the wing-backs not offering much going forward.

Which brings me onto Valencia. He had two lung-busting bursts in either half against a full-back who he could potentially have had on toast once he was on a booking. Having been carded, you have to exploit that vulnerability, yet this was typical tentative Tony these days- plod down the wing, size up the options, turn up and hit a 30 yard pass back to the centre-back and the momentum is lost. Just go at him! Keep feeding him the ball and make him commit another foul. I was shocked we did not revert to a back 4, switch di Maria to the right flank and have a proper go at Bertrand. When you are crowded out through the middle, like Mata was for the most part, you have to make quality wing-play the Plan B, yet we seldom saw either wing-back take on the full-back, which meant we got nowhere.

From the outset, with chances at a premium, you always felt it was a one goal game either way, that would have been different if Mata had converted at least one of those chances- in a game like that those sort are guilt-edged and cannot afford to be spurned. He won’t need telling that, but those two moments summed up our afternoon.

Truth be told, this was a stark reality check and it had been coming too. We have rode our luck numerous times this season, and Southampton will feel yesterday’s result made up for our smash and grab win at St.Mary’s. But go back to the home games against West Ham and Everton, the away win at Arsenal and of course Southampton, we were hanging on. It was bound to catch up with us eventually, there is only so long you can get away with playing in that manner. This reality check has hopefully come at a good time. It may well mean there is a needed change in system and maybe even a few bob being spent in the area we all know needs strengthening.

QPR away next, a game you know they will be guaranteed to be up for. With the tight pitch and tight crowd they will want to try and turn it into a cup fixture and they will pull out all the stops to add to their impressive home form. We thrashed them at home, note with a back FOUR, and there are definite weaknesses we can exploit, namely a relatively ageing defence for them.

We have allowed Arsenal and the dippers to get right back into top 4 contention, and we were wrongfully mistaken if we believed that Champions League qualification for next season was a cakewalk.

Major improvements are needed and fast.