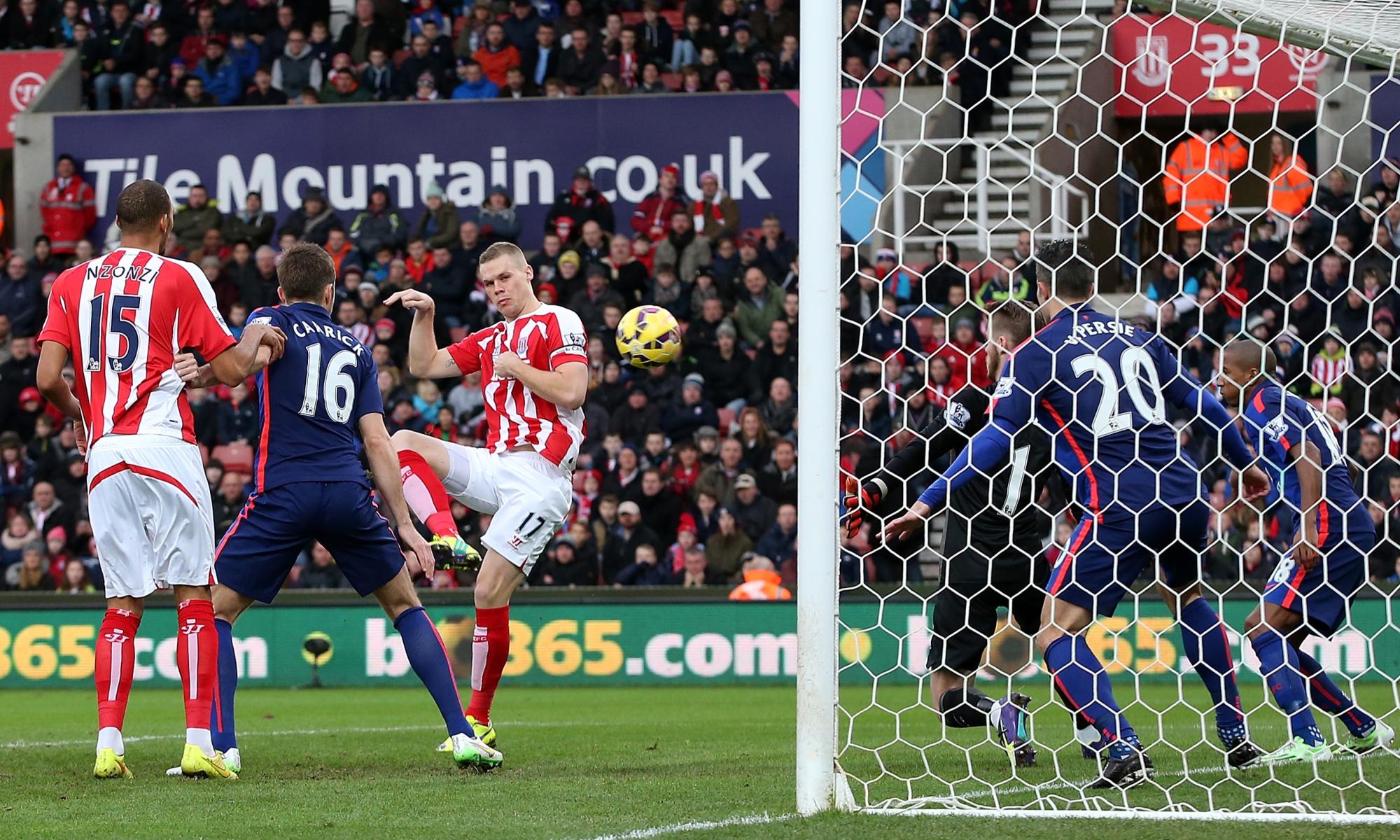 It was an aerial bombardment that almost put the Balkan War to shame. It was a brutal, Brittania besiegement that is the conventional acid test of a side’s steel, resilience and credentials for winning a title. If Louis Van Gaal was oblivious to the Britannia battlefield, Thursday’s encounter will have opened his eyes and been an awakening education.

Before the game Van Gaal spoke about his desire for the players to dream about the game, to give them peace of mind about the task at hand. Given the way events unfolded, there will have been a lot of staring at the ceiling in the hotel rooms on New Years Eve. The unrelenting myth that Mark Hughes has got them playing more ‘football’ is one that never fails to baffle me, but the supposed experts continue to attain that their Jesus has turned murky water into vintage wine, didn’t know I was due a trip to the Opticians. Without their most talented creative gem in Bojan, set-pieces and long-throws were followed by ceaseless missiles to the beanpole freak. This was the Stoke style that supposedly died a death- Tony Pulis performed miracles in keeping seemingly doomed Crystal Palace afloat last season, but for him to teleport between his watching brief at Upton Park and be in the dugout pitting his wits against Van Gaal is some superpower indeed. Change of style, ha. Rumour has it Voltarol has been flying off the shelves today, given the amount of neck ache complaints.

Going to Stoke has the quintessential hallmarks of being one of the most challenging obstacles to overcome and them picking up points against us and Arsenal would normally add weight to that hypothesis. Their uncompromising resistance against the elite has levelled off, conveniently enough, against the supposed inferior sides- Aston Villa, Leicester and Burnley have all come away from Stoke with maximum points, which rendered this gritty and resilient away point a similarly frustrating one to those at Villa Park and White Hart Lane. Technically we reduced the deficity on the leaders, however the feeling that game eluded us means it was another opportunity to apply some pressure duly passed up. Chelsea played Stoke at their own game a few weeks ago with a dogged ruthlessness which gave everyone a frank lesson in how to handle the boistrous cauldron. Lessons can and need to be learned.

The loosely termed defending throughout was shaky, to put it kindly. Every man and his dog knows Stoke’s predominant currency in terms of mustering chances. Their strength lies in the physical, namely set-pieces. That their two outstanding threats aerially in Shawcross and Crouch were left unattended in the area is the ultimate crime against them. One ball in, a free header and one touch later it’s a goal, that was the simplicity of it, an abysmal start. A goal down inside 2 minutes. Happy feckin New Year! Still, better than Arsenal managed (down in 40 seconds) when they visited the Potteries, but that is your archetypal Arsenal on the road- spineless and feeble.

There is a fight about us this year, something which was truant under the ‘aspirer’ and ‘hoper’ last season. We would have lost that game under him, oh wait… There had to be fight, because the back 3 were frankly all over the place. Smalling, Jones and Evans all started together for the first time this season, anyone else lost count of the different combinations? It showed. Stoke, of all places, is not the venue to commit dereliction of duty. Mame Diouf spurned a chance that his mentor at Molde Ole Gunnar Solskjaer would have buried in his sleep, and he should have punished Jonny Evans for some shambolic defending. He never recovered, Smalling and Jones marginally improved, but how the former got away with that penalty shout is surely beyond the most staunch red-tinted Mancs. We got lucky, freak hit the post and Diouf’s powerful volley was a whisker away, on another day we may well have left with nothing. That is at least a minor tick in the box. However, the defensive woes will not have gone unnoticed in this of all months, get that pen scratching on paper Woodward.

Another year, another injury. Ashley Young pulled up with a hamstring injury and the early prognosis, albeit not from the medically sound mind of Van Gaal, was ‘very bad’. He switched to the right wing-back role and did not have the same success as the other flank but it is not great timing for player or club. Luke Shaw looked good though and Rafael can easily fill the void so it is not quite panic stations. Players continually being stricken is something which needs to be drastically addressed, especially as we are looking to push on after the turn of the year. We will need our full complement to nail down 3rd place.

That obviously includes Angel di Maria. I’m saying it a lot I know, but we need his return pronto. That was again evident at Stoke, his pace is the missing ingredient to this side. Instead of somewhat pedestrian side to side passing, he has that directness that stretches defences and has them panicking. Herrera is back though, his one-two touch passing and vision gave us some impetus and urgency but it came too late. Little Adnan was also a welcome returnee but we did not feed him enough, he stretched them but not nearly enough. He could yet be a useful impact player for us this term, whether that suits him right now remains to be seen.

Falcao deserves a special mention. You can talk about wages, price tags, injury records and the like but forget the trivial for a moment and appreciate his display. One chance, one goal- priceless. Seldom has there been a player that I want to succeed more at United than him. Talk of a permanent deal may be premature and a long way off, but his fight and work-rate are very Tevez like, and let’s face it, we loved him. Only Falcao has more than playing like a fan, he is a proven goalscorer. The numbers so far may not justify the agreed outlay, but once he is properly up to scratch, watch those numbers rocket. That his substitution, probably precautionary in nature, was met with disapproval is testimony to his performance. The quizzical look on his face when the number 9 was held up summed up the universal feeling. It was a great start to the year for the Colombian, let’s hope 2015 is the year of the tiger!

Safe travels to those making the 464 mile round trip to Yeovil, this a banana skin if ever you saw one. It’s vital we don’t slip up, as this is now our only realistic chance of silverware. It would be nice if Van Gaal also saw it that way and picked the side accordingly. Now the debilitating festive period is behind us, we are back to the familiar week long preparation, so we are capable of playing our full side and getting the job done.