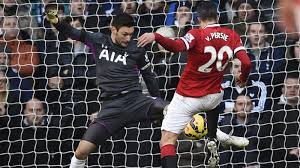 Hope you all had a top Christmas, the festivities were somewhat dampened with us drawing blanks at White Hart Lane. That was a game there for the taking and was definitely two cheap points dropped on the road, the second sobering draw in successive away games. Given the way the day subsequently unfolded, frustration was a severe understatement. In the last Rambling, I pratically tempted fate by saying that the top 2 would seldom gave us a sniff in the race by dropping points and it was up to us to capitalise. Low and behold they both stumbled at the weekend and we did not profit from them coming unstuck. Both of them dropping points together is an exceptional circumstance and one we are unlikely to see again this season. Chance missed.

I mentioned in the last Rambling how we needed to eliminate the slips against supposed inferior opposition, particularly when we travel and have the initiative in games for large periods. Villa clinging on for a draw was a shot across the bows, yet that failure to collect maximum points was not an unfortunate anomaly in this unbeaten sequence. Granted, a goalkeeper is entitled to play well and, on the day, Lloris came up trumps for Spurs but we really should have been out of sight by the interval. The difference will probably be emphasised tomorrow when Chelsea are the next visitors to White Hart Lane, they would have made light work of that Spurs team and took the chances we created. They are ruthlessly clinical, something we need to rediscover post haste.

A lot was eventually made of Van Gaal’s decision to name a first unchanged side in 85 games, especially with such little recovery time- a mere 42 hours between matches. However, that would surely have paled into insignificance had Van Persie elected to volley in rather than test out his juggling skills from point blank range. You cannot expect to come away with the spoils when you spurn guilt edged chances of that nature. We naturally faded as the game progressed, and that’s where fans would have liked to have seen fresher faces from the start, say a Wilson for instance.

Moyes took us to such depths that fans were lauding the point as a credible result. On chances created, it most certainly was not a point to cherish. The physical demands of two games in barely two days visibly took its toll on the strike duo of Van Persie and Falcao, you’d think Van Gaal and the medical team would have the nous to foresee the potential effects beforehand, and prepare two XI’s for Newcastle and Spurs accordingly?

This team, no matter how impressive this unbeaten stretch has been, desperately needs the injection provided by Angel di Maria. He gives our team the shot in the arm, an added dynamism and spark that we are bereft of. We looked laboured and pedestrian in the second half as Spurs grew into the game, a change of pace at that stage would have been a timely boost. The full return of the Argentine roadrunner cannot come quickly enough.

Although I may not be giving off the impression, there was a plus among the disappointment. Defenders are returning, slowly but surely! We have seen this semblance of light on numerous occasions before, and it will probably be a matter of time before someone hits the floor again, but it was good to see Rafael and Luke Shaw get some minutes in their recovery. Van Gaal promised a change of system, namely back to 4 at the back when they are fit, but it will not be plain sailing to dislodge Tony V or Ashley Young on current form.

Next up is Stoke away, a notoriously tricky venue, yet prosperous for us. We’ve only lost once there, that was the humbling experience there last season when we made Charlie Adam look imperious. How? We’ve ended 2014, an unforgettable year whatever way you look at it, with this unbeaten run intact which breeds reasons for optimism going into 2015.

Which, by the way, I hope is a successful year for us all.

Happy New Year to you all!

P.S. Long shot but if you know of any spares for the Stoke game, please get in touch via my Twitter handle @RowlesPaul