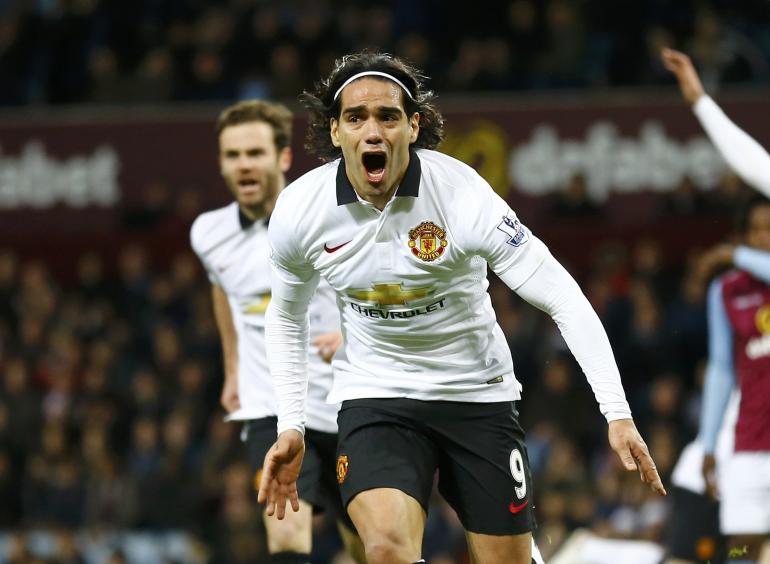 Manchester United’s 6 match winning streak came to end at Villa Park. Chrisitan Benteke had given the home side a first half lead, but his curling strike was cancelled out early in the second half by Radamel Falcao’s bullet header. Gabby Agbonlahor was later sent off for Aston Villa for a controversial challenge on Ashley Young, but United couldn’t go on and take advantage.

Louis Van Gaal made 2 changes to the team that swept Liverpool aside last Sunday, with Darren Fletcher coming in for the ill-stricken Marouane Fellaini, his first start since August and Radamel Falcao coming in for James Wilson, another player who has gone along time without a start. United continued with 3 at the back, with Valencia and Young again supplying the width and Rooney playing deep in the midfield. Ander Herrera missed out, but this time through injury. There was some positive news however, with Rafael and Angel Di Maria both making the bench.

The reds started off well enough, keeping the ball for the first 15 minutes in Villa’s half, but without any real penetration beside a half chance for Van Persie after a whipped in cross from the left by Young, however he didn’t connect as well as he would have liked, scuffing it across the goal. He then had another chance, striking much cleaner but firing straight at Brad Guzan from an angle after a raking Wayne Rooney ball.

After 17 minutes, Villa’s first chance of the game was clinically taken by Christian Benteke. The ball was looped in to the box by Fabian Delph and with United failing to clear, the big Belgian striker took full advantage, twisting and turning Jonny Evans before curling a great shot past De Gea into the corner to put Villa 1-0 up against the run of play. The league’s lowest scorers had taken the lead and United needed to move up a gear.

It was a dire half from then on in, with United struggling to create any clear cut chances, Valencia sent a poor header wide before Van Persie slipped through Falcao, but the shot was miss-hit by the Colombian. United’s best chance of the half came through a cross from Ashley Young, which evaded everyone leading to Guzan having to palm it away as it looked like it was arrowing in. At half-time United trudged in a goal down and with little optimism to take.

Van Gaal was clearly equally unimpressed, swapping it around for the second half, putting Tyler Blackett into the back 3, with the dismal Darren Fletcher making way, it would appear from his first half performance that his playing days at United are becoming numbered. Michael Carrick moved into the middle to create and add guile that was clearly lacking. The reds came out all guns blazing but were rescued yet again by another outstanding David De Gea save, brilliantly tipping over a header from Benteke at point blank, denying him his second.

Van Persie and Mata both came close with efforts fired in at Guzan’s near posts but the equaliser came 8 minutes after the break after good play down the left from Ashley Young, jinking back onto his left, he crossed for Radamel Falcao to power home just his second goal for the club since his arrival on deadline day. It was clear from his knee slide celebration in front of the travelling away fans that it meant a lot to him.

United were going in search of the 3 points, and Di Maria replaced Van Persie on the hour mark, but his touch seemed off and the few shots he had were tame to say the least, perhaps he had a lack of fitness having only trained this past week, but United needed to create more going forwards. Their cause was helped by the sending off of Gabby Agbonlahor with 25 minutes left. At first it looked a shocker, but on second viewing there didn’t seem to be much in it, not helping Young by adding to the constant abuse he was getting from the Villa boo boys.

United reverted to 4-4-2 with James Wilson coming on to partner Falcao, replacing Antonio Valencia, and despite the man advantage, the reds created next to nothing and if anything it was Villa who looked most likely when they hit United on the break, sub Bacuna firing over in the final minutes. The 3 minutes of stoppage time frustrated United, with there seeming to be a lot of time wasting from the home side, with also the 5 subs and the length of time it took for Agbonlahor to leave the pitch.