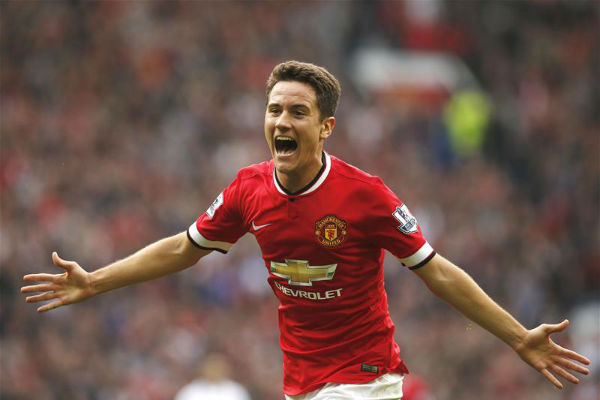 Manchester United’s Ander Herrera is delighted at the prospect of participating in the FA Cup.

The 25-year old Spanish midfielder expressed his excitement of being able to gain some traditional English experience by participating in the tournament and aspires to play at Wembley one day. Herrera, who was Louis Van Gaal’s first signing as Manchester United manager, was purchased from Athletic Bilbao for a fee of £28.5 million. In his brief United career, the former Real Zaragoza midfielder has demonstrated why the English heavyweights were compelled to fork out such a sizeable fee for him.

Herrera has a wonderful passing range, possesses ample amount of concentration and has a terrific work rate which assists him in making timely defensive interjections. Along with these attributes, Herrera also possesses a watchful eye for goal and is clinical from long range too. However, the Spaniard is relishing the prospect of experiencing the invaluable tradition which comes along, having followed the oldest competition in English football during his time in the Basque region.

“It’s different to the Spanish Cup because it’s more about the knockout situation,” Herrera explains.

He also emphasized on the superior level of competitiveness the competition presents and also expressed a desire to reach the final and eventually lift the trophy.

“It’s a very interesting competition. Every team has a chance to win it, which is good. I want to play in this competition and it’s a big chance for us to win a cup.

“I think all the supporters can feel that excitement and some nerves for the game on the day. It’s a very important competition. Last season Arsenal won it and this season we want to be in the final.”

Herrera was made aware of the significance of the competition in United’s history by reminiscent representation of the teams record in the competition.

“I have seen on the walls at the training ground how many times we have won the FA Cup. Manchester United has won it more times than anyone, just like the league. It’s an important competition for United but all the competitions are important for the club because we always want to win everything.”

Slight error, mind. United have won it the same amount of times as the current champions – Arsenal.

The reds face Yeovil Town away in the third round tie, after the latter defeated Accrington Stanley on Tuesday. United were humiliated and dumped out of the Capital One Cup 4-o by MK Dons and will be looking to salvage something by having a decent run-in in the FA Cup.

“It would be fantastic [to play at Wembley] but we have to be humble for the moment because we have to win a lot of games to get there. But I think we have the qualities to be in the final.”