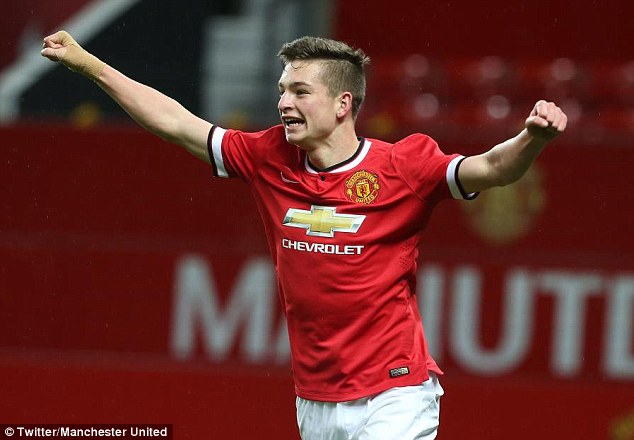 Manchester United’s Under 18’s began their FA Youth Cup campaign with a hard-fought 1-0 win over neighbours Bury at Old Trafford, aiming to continue a proud tradition held by the reds in the Youth Cup that stretches back many years.

This should have been on paper an easy game for United, Bury being 4th in the Youth Alliance North West league, but as shown in recent years, there can be a few shocks in this competition, as the reds only know too well having been previously knocked out by Burnley and Huddersfield.

United began the game without a number of key players; pacy striker Demetri Mitchell was still on the sidelines following ankle ligament damage, along with Ruairi Croskery and Jordan Thompson. However, the reds with a number of Under 16’s in the first eleven, got off to a blistering start early on, and showed no signs of nerves at the Theatre of Dreams, playing with high tempo.

United’s lone striker Marcus Rashford had a shot cleared off the line by Matthew Foulds just 3 minutes into the game following a long kick from United’s goalkeeper Dean Henderson, and Bury were struggling to cope with United’s attacks. Rashford again went close when he flashed a shot into the side netting, the reds twice nearly going a goal ahead moments later.

It was no real surprise that after 12 minutes United made their pressure pay. A great ball played in behind the full back by recent Dutch acquisition Timothy Fosu-Mensah, who was playing in midfield rather than at the back, released Zach Dearnley, who showed his pace by running on to the ball and smashing a great shot in at the near post, 1-0.

The pace and interchanging movement of United’s front 4 attacking players was causing real problems and they could smell more goals, Rashford had one ruled out for offside before Fosu-Mensah forced a parry from the goalkeeper, but Bury did manage to get a foot hold in the game as the half drew on.

The reds’ defence stood firm though, with solid displays from captain Axel Tuanzebe and Ro-Shaun Williams at the back. United became more sloppy in possession and the intensity shown in the first 15 minutes dropped. Although they did create two more chances before half time, with Dearnley and Joe Riley forcing the keeper to make saves with his feet.

United came flying out of the traps again after the break, aiming for a two goal cushion, Rashford headed over Tyler Reid’s cross from just a few yards out with the rain beginning to pour. Bury were forced into desperate long range attempts, with United going close once again with Gribbin clipping the cross bar with an excellent curling shot. Reid once again showed his pace and power, running from his own half to leave him one-on-one, but he couldn’t finish, another good save.

There was always the worry with it only being 1-0, and United were nearly made to pay for their wastefulness in front of goal. Joe Riley cleared a goalwards effort with around 20 minutes to go and Henderson was forced to make a few important saves. United were still making chances though, with Cameron Borthwick-Jackson powering a shot narrowly wide.

Changes were made with Oliver Rathbone and Charlie Scott being introduced with 10 minutes to go, and Rathbone nearly made an instant impact, with his shot being well saved before playing through Devonte Redmond with another one-on-one for United, but with another poor finish. In the final minutes, Riley danced passed a couple of defenders but again was denied by the Bury keeper. Missed chances did not come back to haunt United though, it finished 1-0 but it could have been many more if not for John Ruddy in goal for the visitors and some rash finishing from United. The reds now face Hull City at home in the next round.