Two Manchester United supporters were ordered to take down a banner mocking Steven Gerrard during Sunday’s 3-0 victory over Liverpool.

The banner read ‘Au revoir Gerrard, come back when you’ve won one’ and was unfurled in the Scoreboard End at Old Trafford. It clearly pokes fun at the Liverpool captain who unforgettably fucked up his club’s chances of winning their first league title in 24-years after his slip which lead to Demba Ba’s goal for Chelsea last season.

Does the wording of the banner sound familiar? It was made in reference to a sheet of bed lining unfurled by Liverpool fans at Anfield in 1994 which read: “Au revoir Cantona and Man United. Come back when you’ve won 18.”

The banner was made in reference to a bedsheet unfurled by Liverpool fans at Anfield in 1994 which read: “Au revoir Cantona and Man United. Come back when you’ve won 18.” 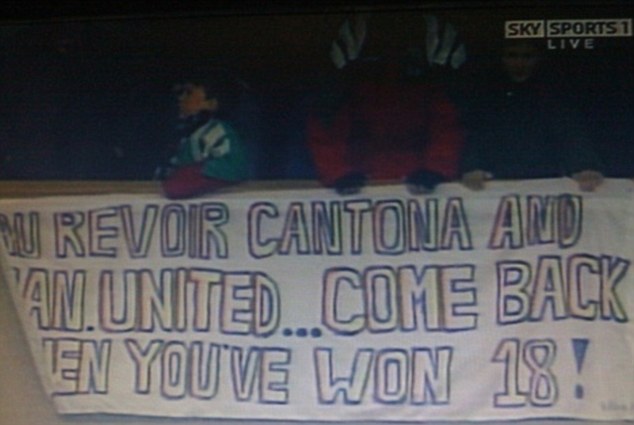 You a probably asking the same question I did when the news filtered through my feed. Why would a banner poking fun at Gerrard upset stewards at Old Trafford? A United spokesperson told the Telegraph: “Any banner over a certain size would need a fire certificate. This banner would have contravened the ground regulations.”