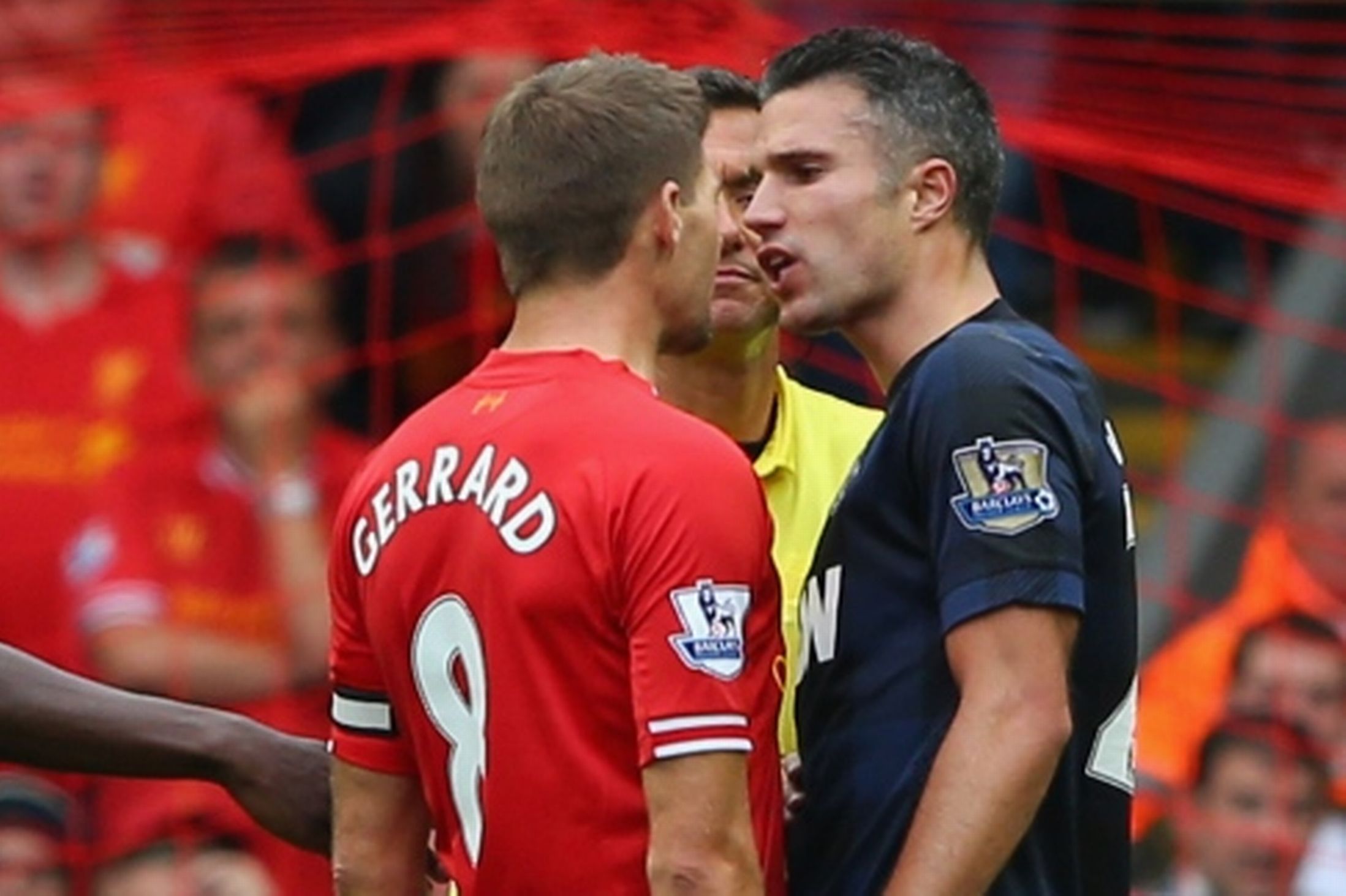 Manchester United versus Liverpool has always been the first game that you look out for when the fixtures are released and it is a fixture that remains one of the most fiercely contested matches in world football, let alone the Premier League, despite the fact that the two teams have seldom been in direct competition in recent years- Liverpool’s last title push with United was 2008-9, a season best remembered by Rafa Beneath Us’ ‘facts’.

Every generation of fan has their own particular memory of the two juggernauts colliding and, in a special Stretty News feature, we have formulated some glorious recollections from memory lane from various United fans.

We have asked United youth statistician and co-author of Sons of United, a great read by the way, Tony Park better known as @mrmujac, Ian Rimmer of @RedRants and Bill Rice, who as you are probably aware is a popular voice on Radio Manchester, featuring on BBC Red Wednesday. They have the benefit of experience and give really enlightening and entertaining responses as they reminisce on fixtures past. Myself and chief editor of Stretty News Dale O’Donnell, as the younger generation of United fan will give a somewhat fresher perspective, predominantly from the noughties. This piece compares eras  and just emphasises just how many brilliant memories this fixture has conjured up.

We have selected five questions which certainly have the potential to polarise opinion, they are as follows:

1. What is your earliest memory of this titanic fixture?

2. What is your favourite moment from battles past and why?

3. Who has been the player you have despised the most in this fixture and why?

4. If you could choose a composite eleven of the current teams, who would be in your team?

5. What is your score prediction for Sunday?

1. Not the best but the memory that springs to mind is the 2002-03 League Cup final. Liverpool winning 2-0 thanks to goals from Steven Gerrard and Michael Owen. I was a kid at the time so the crocodile tears were excused.

2. Gary Neville’s celebration. Reason being that is exactly what I would have done if I had the chance to represent my beloved club. Run towards the Kopites kissing the crest and jumping around like blue arse fly… just to show how much I despise their club. Even to this day when I watch the clip I get Goosebumps.

3. This is tough because I could name an endless list of Liverpool players that I cannot stand – past or present. Steven Gerrard definitely warrants a mention with his Danny Dyer – soft man thinking he’s hard – ways. Luis Suarez racially abused one of our own and committed many offences throughout his career. Then you have Stan Collymore, who just isn’t the most respectful human being to walk the earth… But to answer this question, Kenneth Dalglish gets under my skin more than most. A fantastic footballer in his day but the way in which he comes across… Miserable, deluded, and Liverpool through and through.

If you asked for a Reserve line-up, I would at least try to fit one or two of their lads in.

5. The Scousers were an entertaining side to watch last season but this year they really are below bar. They will undoubtedly raise their game for United as per but we have to do the same judging on our performance versus Southampton. The game will be won by the side stronger defensively. United 2-0 Liverpool.

1. My earliest memory against that lot was also not a particularly rosy one either. Around this time in 2000 at Old Trafford, Gary Neville was playing centre-back, never his self-admitted niche position, and he gave away a cheap free-kick for handball. Danny Murphy curls it in from the edge of the box and it turned out to be the only goal. I was completely devastated as a fresh-faced 9 year old. My hatred for them started young!

2. Are there many better moments you wish dream about than scoring in front of the Kop in the dying embers to win the game and send the travelling reds into delirious raptures? It has to be John O’Shea pouncing on the Reina fumble from the Ronaldo free-kick . Scholesy had been sent off and it looked like we would be on the ropes. A slip-up there would have left the title race ajar, but from that iconic moment I knew the lead would be insurmountable. It felt like a massive goal and it’s one I’ll never forget.

3. It is terribly difficult to come to a concrete decision on this one. My existence was not a thought at the time, but by all accounts I’ve been told that Steve McMahon and Graeme Souness were bellends. I saw enough from Kenny Dalglish’s spell as Liverpool manager a couple of years ago to come to the conclusion that he is a nasty piece of work, to put it kindly. I would have said Carragher, but his punditry is slowly winning me over and he was the sort you’d want in your team. Gerrard came into my mind, why do the slips always happen to the nicest people? Viva John Terry. My choice is Suarez, or Sewers as I liked to refer to him, racist, diving, theatrical cannibal. Wonderfully gifted though and glad he isn’t theirs anymore.

4. Composite XI? None of theirs. Simple as. Sterling has got good pace and he’d possibly make the bench.

5. It’s going to be tight, hope I’ve jinxed it now. That lot will raise their game, it is their cup final after all, both are nervous wrecks at the back and I think it will be a case of us outscoring them. They look devoid of danger bar Sterling, our attacking power should make it 6 in 6.

1. Earliest memory? Gordon Strachan’s cigar celebration in front of the Kop after he scored at Anfield, I think it was an equaliser in a 3-3 draw, I don’t remember a lot about the game itself, but remember that goal and how it seemed to take an age for him to go through and score.

2. John O’Shea’s winner at Anfield takes some beating, to score the winner in the 90th minute in front of the Kop and then admit you stole Gary Neville’s dream is pretty special.

3. It would be easy to say Gerrard as he represents everything Liverpool, or even Danny Murphy for the winners he scored at Old Trafford, but it has to be Luis Suarez – for all his behaviour on the field and his disgraceful behaviour towards Patrice Evra. He was a proper pantomine villain, and a dangerous opponent too as he knew how talented he was.

Of players available this weekend:

5. I think United will win the game as they have more firepower going forward and can exploit Liverpool’s defensive weaknesses, but based on recent performances it could be much closer than people expect. I’ll go for a 2-1 United win, with Wayne Rooney and Robin van Persie to get the goals.

1. When I was ‘growing up’ the Scousers were winning everything which helped me despise them more and more by the year and, although we had a fairly decent head-to-head record against them despite never really challenging them for the title, unsurprisingly my earliest vivid memory is a bad one. I was stood in the Stretford Paddock when Ronnie Whelan volleyed a lob over (I think) Jim Leighton (who by the way was always a calamity waiting to happen). It’s a shame I don’t personally remember an incident my Dad told me about just a few years ago which happened when I was 10. He took me to my first away trip to Anfield. I pestered him for some sweets and a drink (as you do when you’re a kid) so he obliged and left me on the terrace. When he returned all hell had broke out in the United end and I was nowhere to be seen! He’d lost me for a pack of sweets! Happily a fellow fan had grabbed me away from it all and waited to see if he could find a bloke looking a bit pale and panicky! When he saw my Dad he tapped him on the shoulder and said “is this what you’re looking for?!”. My old man swore me to secrecy even 30 years later, I wish I had a memory of that.

2. It has to be my first solo trip to Anfield without a ticket. I was only 16 and full of myself but a bit stupid in all honesty. I’d been travelling to games on my own for years already by then but never Anfield. I knew I could find a spare so I wasn’t worried, problem was I accidentally bought one for the Kop (see, stupid!). Anyway, unfazed by it I made my way in and headed straight for the middle like I used to at Old Trafford (see, stupid!). I remember buzzing in the knowledge I was a Manc surrounded by these filthy bastards and they didn’t have a clue, that was Until Paul Ince hit the post at the Kop end and muggins here accidentally almost celebrated a goal! That was it, trouble brewed but, just as it always was with United, it turns out I wasn’t on my own. There was a mob of about 12 ‘lads’ not far behind doing the same as me. When the saw me getting into some grief they piled in and helped me out, I remember shaking like a shitting dog but felt about 10 feet tall! The stewards dragged us out of the Kop and paraded us pitch-side down to the away end where we were given a hero’s welcome. Unbelievable experience. Ian Rush scored his first goals against us that day and we got beat unfortunately. Great day, that.

3. Steve McMahon. Just a horrible bastard plain and simple. Epitomised everything they stood for in my opinion.

4. None of theirs would get in it. I rate Lallana hugely and wished we’d been interested in him but it wasn’t to be. He’s soiled now so he gets nowhere near my XI nor do any others.

5. We owe them one big time and, presuming they can’t win another hat-trick of penalties, I can’t see them getting anywhere near us this time so I’m going for a very satisfying 3-0 win.

1. What is interesting is that during the 1940’s-1960’s it was just another fixture. There certainly wasn’t the rivalry there is today. I think that started after the 1977 FA Cup Final because United weren’t challenging Liverpool for the title in the early 1970’s so it was only in the late 1970’s and 1980’s that it became very bitter. In terms of memories…I remember watching Bobby Charlton scoring with a thunderbolt in the 2-2 draw at Anfield in 1971.

2. Obviously the 1977 FA Cup Final was special but my first ever game at Old Trafford was on Boxing Day 1978 and Liverpool hammered us 0-3. Although I was gutted with the result the whole experience was remarkable and I loved every minute of it.

3. Very few players rile me and most Liverpool players I just don’t give any thought to at all. Obviously Gerrard is easy to dislike but he isn’t very different to most overpaid players these days. Historically both Graeme Souness and Steve McMahon were twats.

4. I wouldn’t want any Liverpool players in my team.

Dale and I would like to thank Bill, Ian and Tony for their brilliant responses.

If you liked their musings, you can read more on Twitter: Tony, Bill, Ian, Paul, Dale

We hope you enjoyed this feature and would love to hear your responses to these questions. Leave your memories in the Facebook comments or tweet us at the above handles.