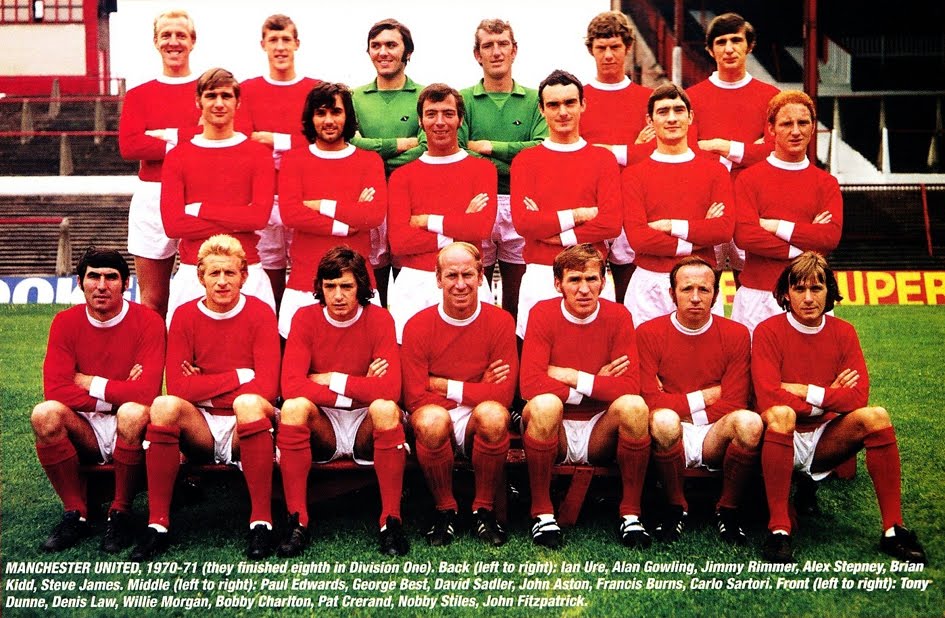 In 1970 United were struggling to adapt to a new era without their great manager, Sir Matt Busby, and Wilf McGuinness was the man charged with leading this change. In the same way that David Moyes could never replace Sir Alex Ferguson, McGuinness was out of his depth and sacked eighteen months into his career as manager. Unlike today, where Ferguson has resisted returning, Busby returned to the fore for the remainder of the season.

The European Cup winners of only two years before were in decline and transition, again showing striking similarities to recent years. Whilst United have struggled to replace Nemanja Vidic, Rio Ferdinand and Paul Scholes to name just a few, the 1970 side were still too reliant on their brilliant yet fading Holy Trinity of George Best, Bobby Charlton and Denis Law.

McGuinness had been promoted from reserve team coach to head manager for the start of the 1969-70 season but had to wait until his seventh game in charge for his first win. He finished 8th in the league but was unlucky not to reach a domestic cup final, losing at the semi-final stage in both the FA and League cup. To add salt to the wound, the defeats were to Leeds United and Manchester City. United had been without Denis Law for the majority of the season due to injury, and McGuinness risked his popularity by transfer listing the Scot. However, no bids came in so the striker remained at the club.

United lost the opening game of the 1970-1 season to Leeds and were thrashed 4-0 by eventual champions Arsenal who would finish 22 points ahead of United. Their first win came the game after at home to Burnley who would be relegated. In goal that day and for the rest of 1970, was Jimmy Rimmer who had been the understudy to Alex Stepney since signing as a schoolboy in 1963.

Rimmer had plenty of action to face and was used to picking the ball out of his own net, with United being heavily beaten on more than one occasion. They lost 3-2 away to Wolves and then unforgivably 4-1 at home to neighbours Manchester City. That game was controversial due to George Best breaking Glyn Pardoe’s leg with a late tackle and the manner in the thrashing proved the rut that United had found themselves in, similar to Moyes’ embarrassing clashes with City last year.

Arsenal were again convincing winners in their trip to Old Trafford, whilst McGuinness yet again came so close yet so far in the League Cup, losing in the semis once more on December 23rd to Aston Villa. His last game in charge of United would come on Boxing day in a thrilling match at Derby’s Baseball Ground. On a quagmire of a pitch covered in snow, Derby lead 2-0 at half time but two headers from Law and a scrappy effort from Best had given United the lead only for them to concede two more. Brian Kidd headed an equaliser to cap a sensational game but the writing was on the wall for McGuinness; 1971 would see Busby return as manager.

It was a poor start for the legend with the reds getting knocked out of the FA Cup by second division Middlesbrough. With Stepney reinstated in net, United started to grind out some victories yet inconsistency in results still haunted them. In February, United thrashed Southampton 5-1 with Alan Gowling scoring four. Gowling was one of only seven university graduates to play for United and was signed after completing a degree in economics, earning the nickname ‘Bamber’ after the University Challenge host Bamber Gascoigne.

A 1-0 away defeat to Everton the next game emphasised this inconsistency and the season petered out with some more narrow defeats yet some other exciting and comprehensive victories. In March, United beat West Bromwich Albion 4-3 and then bettered that as an away performance by beating Crystal Palace 5-3 in April. Law got a hat-trick, whilst Best got a brace. The season’s top scorer, Best got another brace in the final game of the season. City were beaten 4-3 in another exciting game which again proved United’s failings in the back. Charlton and Law were the other scorers that day to emphasise the point that the Holy Trinity would be very hard to replace.

Overall, United were in decline and struggling to move on from the glory years of Wembley 1968. The decision to appoint from within had backfired and resulted in two seasons in a row where they finished eighth. For the most part, United remained reliant on their greats from the goals of Best to the steadying of the ship from Busby who remained a huge shadow on the club. The great man needed to be replaced by someone who had the character and profile to handle the job. United turned to a man who had just guided Leicester City to promotion, Frank O’Farrell.