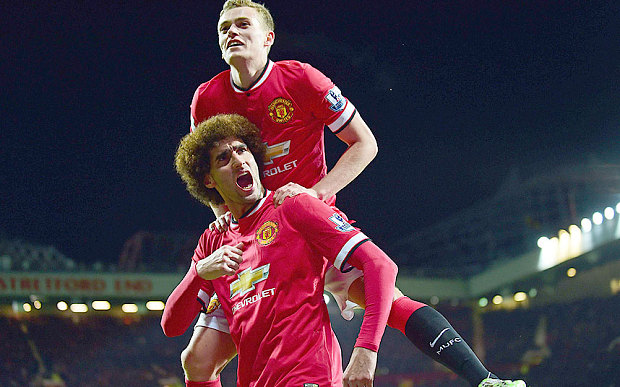 After woeful luck with injuries and another slow start to the season, the good news is that Manchester United are finally starting to find some form. Louis van Gaal’s philosophy is starting to take root amongst the team and they are putting points on the board. It’s not the swaggering, irrepressible Red Devils of Sir Alex Ferguson, but it is certainly a step in the right direction.

Picking up from where they left off against Hull City, Manchester United dominated the ball throughout against Stoke, and Ander Herrera really should have put England’s most successful club ahead in the opening minutes of the game. Stoke ‘keeper Asmir Begovic inexplicitly gave the ball away to Robin van Persie, who selflessly squared the ball to Herrera, only for the Spaniard to sky the ball horribly over. It didn’t take long for the former Athletic midfielder to make amends, putting in a fantastic cross for Fellaini to head home strongly.

The big Belgian has been a revelation this season, looking a completely different player to the one who was so poor last term, and became a scapegoat for United’s inefficient summer transfer window. Fellaini has provided a physicality and grit that has been missing from Manchester United’s midfield for far too long. Indeed, he was unfortunate not to add to his tally, and the Red Devils’ lead before the break.

Stoke though were an occasional threat on the break though, former Barcelona forward Bojan in particular looking as if he has found his feet in the Premier League. It was his direct running that led to Stoke’s equaliser, the ball falling to N’Zonzi to hammer home from distance. It highlighted that Manchester United still have weaknesses at the back, in a large part due to a plethora of defensive injuries, and if not for a timely intervention by Marcos Rojo, it might have been worse for the Reds.

In the end though, Manchester United’s quality told through, Stoke surprisingly undone by another deep ball into the box, Juan Mata finishing with a left-footed shot, although Rojo did claim to have had a touch. It wasn’t a perfect performance by any means. Di Maria’s creativity was sorely missed, as was Rooney’s fight, guile, and perhaps most significantly his current clinical form in front of goal. With the amount of possession had, the match really should have been killed off earlier and much more comfortably; Manchester United were once again beholden to David De Gea in goal following a period of late Stoke pressure. A narrow goal-line decision was also a very close call.

It is unfair to pick too many holes though. Louis van Gaal is still having to cope without a raft of key players, results are more important than performances at the moment. Fourth is exactly where Manchester United need to finish this season, and it is where the Reds are currently sat. Falcao is getting close to full fitness, Rooney in fine form, and van Persie too good to let his difficult patch last too long.

Maybe a little fortuitous, and certainly not a pedigree performance, but another case of job done for Manchester United against Stoke tonight, and for now that is all that matters.