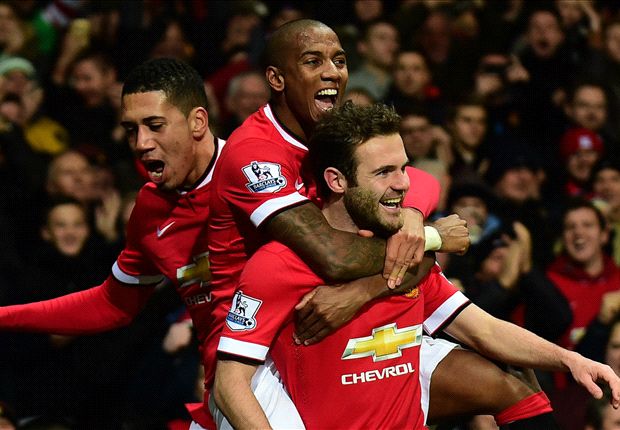 Stoke put up more of a fight than Hull at the weekend but their efforts were not rewarded as Manchester United won their fourth consecutive fixture in the Premier League.

It was not anywhere near our best performance of the season but encouraging signs were noticeable again. Louis van Gaal is implementing a style of play that is possession based with growing intensity as the game goes on.

The opener came from Marouane Fellaini who brilliantly headed home a cross by Ander Herrera. United’s second is a bit of a misery. MUTV gave it to Juan Mata but the scoreboard at Old Trafford said Marcos Rojo. A free-kick taken by the Spaniard seemingly got a slight touch off the defender and went past Asmir Begovic.

David de Gea – De God, actually. Had very little to do throughout but pulled off a masterstroke of saves on the brink of full time. If it was anyone else in goal United wouldn’t be walking away with 3 points. 9

Antonio Valencia – Not his best performance of late but didn’t do anything particularly wrong either. Offered support up and down the line for Fellaini. 7.5

Chris Smalling – Getting better and better since the sending off against City. Composed and strong enough to boss Diouf whenever the former United striker attempted to keep or retain possession. 8.5

Marcos Rojo – Committed a sublime clearance in the first-half and made some important defensive headers to keep Stoke outside the box. As a matter of fact, I find myself warming to the South American game-by-game. He got a touch on the second goal. 8

Ashley Young – Since when did Young beat his man so frequently? Had everything going for him tonight bar end product. Like De God, in the second-half, he cleared a ball off the line keeping United in the lead. 9 MOTM

Ander Herrera – Missed a sitter at the start but a good performance overall. Had zip in his passing and it’s no wonder we look more capable in possession since his return to the starting line-up. Went off after receiving a late challenge from behind. Fingers crossed it’s not ANOTHER injury. 8

Marouane Fellaini – Took his goal superbly to put United ahead in the first-half and made some vital interceptions. Phil Neville spoke positively about him during NBC’s commentary and said the Belgian was played out of position last season. When you consider the contrast in performances from then to now something has to give. 8.5

Michael Carrick – Wore the captain’s armband and unnoticeably kept everything settled in midfield. Provides a platform for those around him to express themselves. 8.5

Juan Mata – Decent on the counter but imagine him with a boost of pace? Mata spread the ball reasonably well but there was no sense of magic about his performance. That’s what I expected when we signed the midfielder from Chelsea. A little disappointed. 7

Robin van Persie – Improvement. Picked up the ball in wide positions and at times muscled his way through Stoke City’s full-backs. No goal but we won with our main man up top going through bad form. We’ll take care of you, Robin. Ignore the angry folk on Twitter. 7.5

James Wilson – Quiet before the interval but blossomed in the second-half. His pace made Stephen Ireland look a cunt, although that’s a ready made job as it is. Frightened the opposition before being replaced by Falcao. 7

Radamel Falcao – Got into dangerous positions but the ball never feel to him. First touch was slightly off but it’s been a long time since he completed 90 minutes of football – over 13 months I heard on commentary. Needs game time. 6.5

Darren Fletcher – Didn’t have much impact on the game. 6

Adnan Januzaj – Came on just before full time, therefore, does not warrant a rating.