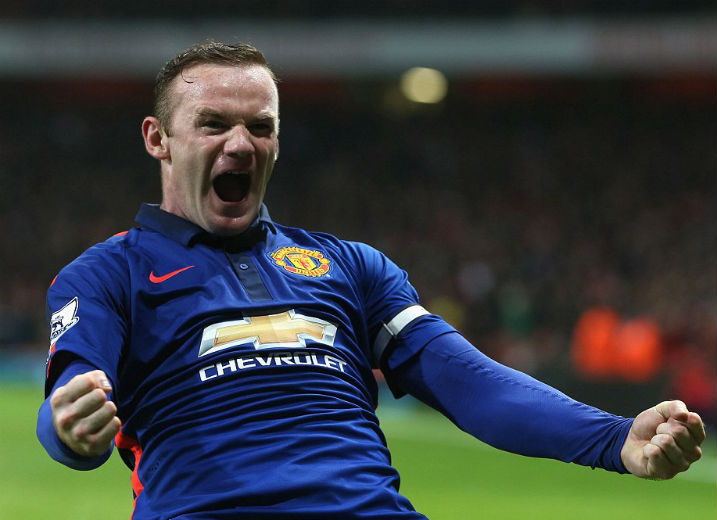 Where to even start writing a match report after a game as bonkers as that? All you can really say is that United have finally won their first away game of the season and are in fourth place. But even that makes little sense given the way things have gone.

If you’d asked me at any point in the first 25 minutes what chance we had of winning, I’d have laughed. I was laughing most of that time anyway, in a slightly unhinged way that was making my wife nervous. Louis van Gaal had picked a formation that still few of our players actually seem to understand, and it was a total shambles of a start from everyone but David de Gea.

With anyone else in between the sticks, we’d have been at least a goal down by the time Luke Shaw, the last member of our first choice (?!) defence gave in and joined the rest on the injury list. But de Gea stood firm, making save after save and shattering the fragile confidence of the home side. Yes, including Danny Welbeck.

If they’d have got a goal from their early marauding pressure, they’d have gone on to win, but as the half went on, even with the terrifying prospect of Ashley Young coming on at wing back, United grew into the game and Arsenal’s attacks became less frequent and less scary. Suddenly Fellaini was actually finding team-mates with his knockdowns and di Maria was getting the chance to run at the home defence.

Sure, we didn’t manage a shot on target, and Robin van Persie was his usual anonymous self, but there were signs of promise. At the back, Chris Smalling had managed not to get sent off, while Paddy McNair and Tyler Blackett were settling in and starting to anticipate the Arsenal runs rather than simply reacting to them.

Speaking of reacting, Jack Wilshire was lucky not to get sent off for a bafflingly furious reaction to Mike Dean giving a free kick against him for fouling Fellaini, proceeding to swear at the ref and then headbutt the big Belgian. Well, he tried anyway, but probably got away with it due to the fact that his headbutt barely reached Fellaini’s chin, so didn’t look like much. He still ended up going off in the second half though, another injury for two clubs overburdened with them at the moment.

He wasn’t even the last player to go off injured either, although the next casualty was a victim of his own team-mate. The whole Arsenal team were a victim of Kieran Gibbs, frankly, in a mad minute where he managed to crock his own keeper and slice Antonio Valencia’s typically wayward cross-cum-shot-cum-disaster into the net. United had started the second half pretty badly and still hadn’t managed a shot on target but were winning. Same old Arsenal.

They kept on coming at us, but with a lot less hope than before, like a team who’ve seen this movie before and knew how it was going to end. Up front, Welbeck kept on plugging away gamely, threatening with his pace and movement but achieving precious little. Sound familiar? Certainly did to me. And it got worse for Dat Guy, with a painful reminder of the moment his United career pretty much came to an end.

You’ll remember that chance against Bayern last season at Old Trafford, right? Welbeck, playing one of the games of his life, was sent clean through and never looked like he’d score. And didn’t. When di Maria sent Rooney through, I never thought he wouldn’t score. And he scored. Even more importantly, WE’D HAD A SHOT ON TARGET.

Of course, the flip side to this came a few minutes later when di Maria ran through on his own and you just knew he’d score. How could he miss? He missed. And with the board showing eight minutes of Wenger Time (ahem), suddenly the 400 or so Arsenal fans still in the stadium began to believe. And obviously we let them score because we always let people score, but managed to waste enough time to see out the win.

So what does it all mean? We were beyond hopeless at times and would have been punished by a less clueless opposition, but when we did hit them on the break it was like 2009 all over again. And we’ve finally won an away game and got into the top four. Do we kick on from here? Have we got any defenders left? Can van Persie possibly continue to get picked?

I dunno, I’m still so confused by what happened here…