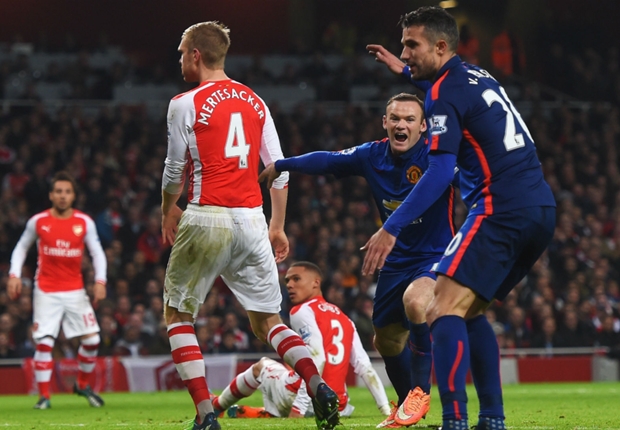 Manchester United move back into the Premier League’s top 4 after a 2-1 victory over Arsenal.

It was a collision between Wojciech Szczesny and Kirean Gibbs that lead to the opening goal. Antonio Valencia’s lowly driven cross picked up a deflection off Gibbs before finding the net.

United captain Wayne Rooney put his two goals ahead before Oliver Giroud scored a consolation goal on his return from injury.

David de Gea – Called upon regularly in the first-half and made a brave save to prevent Jack Wilshere scoring from close distance. Distribution was the only let down but he had to deal with an inexperienced defensive unit. 8

Tyler Blackett – Not his best performance since coming into the first-team but did well with clearances and recovering from mishaps. 6

Chris Smalling – Big 90 minutes for the defender after coming in for scrutiny after the sending off versus City. Lead the way for those inexperienced around him. 7

Antonio Valencia – We know he’s just a makeshift right back at the moment but nobody could question his efforts. Played a key part in the opening goal. 7

Marouane Fellaini – Again, one of our better players. Up for the occasion and got stuck in when necessary. Found Di Maria in a good position out wide before Rooney’s goal. 7.5

Luke Shaw – Picked up an injury in the first-half. Unfair to make any judgement.

Wayne Rooney – Covered a lot of ground throughout the game and took his goal very well. 7

Angel Di Maria – Went missing at the start but once the Argentine came into the game he held the ball up well. Assisted Rooney’s goal but missed a huge chance which would have really put Arsenal away by choosing to chip the ball rather than place with power. 6

Robin van Persie – Passenger. Looked uninterested and offered nothing but a classy turn in the second-half. Needs to improve drastically before Falcao returns. 5.5

Ashley Young – Replaced Shaw in the first-half and put in an impressive shift. Had a big say in United’s opener. 7

James Wilson – Showed urgency by running at Arsenal, winning free kicks and getting back to give the defence a hand. 7

Darren Fletcher – Came on to secure the lead and try get ahold of possession, although he didn’t play very long. 6

Man of the match goes to Dave. Surprise, surprise.