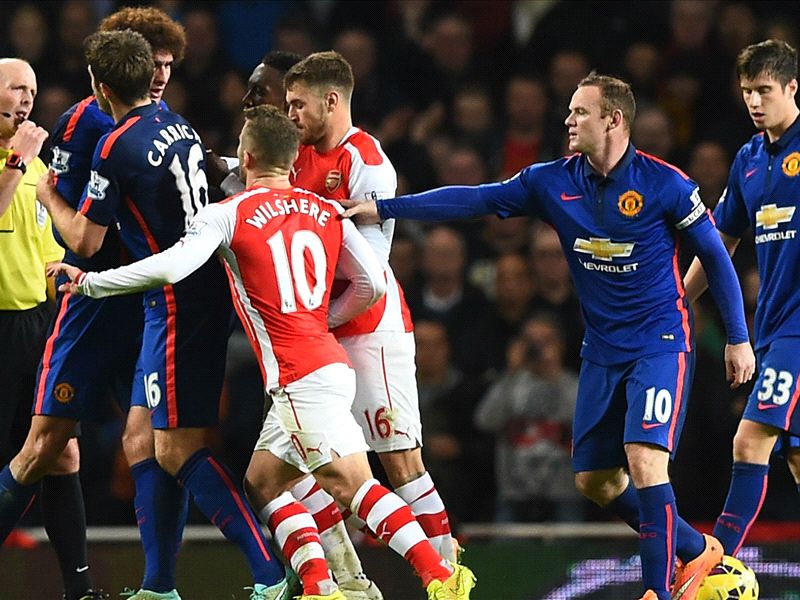 Tensions were high between Arsenal and Manchester United but a step too far should have seen Jack Wilshere sent off.

Wilshere is a footballer with an acquired taste so strong the sight of him would make you want to throw yourself at the nearest sharp object.

While that’s over the top and you should know at this stage I’m extracting the urine, he is one horrible little so and so.

Arsenal versus United is a huge fixture in the Premier League with genuine rivalry. It was much bigger in previous years when both clubs were at one another’s neck fighting for the title, however, the hatred remains.

Wilshere, in some sense, gave spectators a taste of what it was once like.

The first-half saw the England international pull Marouane Fellaini to the ground giving away a free kick. It was Wilshere’s reaction that deserved red but Mike Dean, standing a few yards away, chose to ignore it.

Wilshere had no argument because it was a clear foul, although regardless of that he went off on one with a furious temper. After shouting in Dean’s face and pushing Fellaini the Arsenal midfielder, aged 22, head-butted the Belgian and got away with it.

They say “Karma’s a bitch” and it wasn’t long before a tough challenge by Paddy McNair forced Wilshere to tears and gradually off injured.

I could not help but laugh at the cigarette smoking, thug like, head-butting, hard man with crocodile tears. That’s what he got for acting like a prick.

A clear observation was how Arsenal looked more creative with Santi Cazorla pulling the strings. The Spaniard briefly increased the scare factor when the Gunner’s moved forward against an inexperienced defensive unit.

Anyway, stay tuned for more match day coverage tonight and tomorrow. I’m off to enjoy a celebratory beverage. We all deserve one.