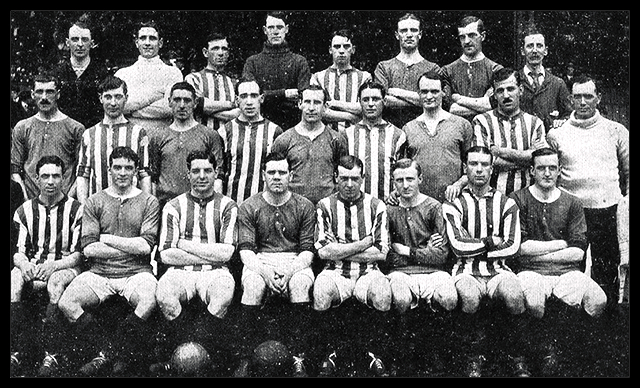 A century ago, the horrors of the Great War made football pale into insignificance yet despite that, Manchester United’s 1914-15 season was not uneventful. In the only full league season to be held in either world war, United avoided relegation controversially through a betting scandal that shocked a nation who turned to football for a joyous escape from the demoralising and shattering news reported back weekly from the Western Front.

Football was widely lambasted for continuing to go ahead when the nation was at war, especially as the more ‘gentlemanly’ games of cricket and rugby union had instantly suspended their seasons. In reality, stadiums became a platform for recruitment officers, whilst propaganda would target both players and fans to ‘do their bit’ for their country with many answering the call. At the end of a league championship that Everton won, the FA decided that the football league would be cancelled until the end of the conflict that was taking victims in their thousands and had gone beyond the originally promised end date of Christmas 1914. Old Trafford held the FA Cup final where Sheffield United overcame Chelsea 3-0 and was also home to the betting scandal that shamed United on Good Friday 1915.

United were close to relegation after performing dismally throughout the season. A day after Britain declared war on Germany on the 4th August 1914, United drew 0-0 with Manchester City in front of 20,000 spectators, the largest attendance of the season. It took four games for them to register their first victory, scoring two against Blackburn Rovers. In November they lost three times in a row, whilst in the winter United drew six out of seven matches. They had not won two games on the bounce and were facing a Liverpool team who were stalling in mid-table.

On the morning of the 2nd April 1915, seven United and Liverpool players conspired to fix the day’s game. The oblivious George Anderson scored both in a 2-0 victory with Jackie Sheldon missing a penalty for Liverpool. Sheldon is believed to be the initiator of the scheme as he had links to United having previously played for them. The referee had noted in his post-match report that Liverpool didn’t appear to be trying and suspicions were confirmed when it was found that a large amount of bets had been made on 2-0 United at odds of 7-1.

The FA found Sandy Turnbull, Arthur Whalley and Enoch West, of United, and Sheldon, Tom Miller, Bob Pursell and Thomas Fairfoul, of Liverpool, guilty and banned the seven for life alongside another conspirer who played for Stockport County. However, all the players were offered the chance for their ban to be lifted as long as they volunteered to fight in the war. All accepted this compromise except West, who was the only United player to actually feature in the match.

Arthur Whalley was seriously injured in the battle of Passchendaele but managed to appear for United again, playing 23 times in the 1919-20 season. Sandy Turnbull, however, was not so fortunate. The Scotsman died in Arras on 3rd May 1917; a fate also faced by teammates at the time, Oscar Linkson and Patrick McGuire. Eighteen men have died in conflict and also played for United at some point in their short lives.

Turnbull, alongside the legendary Billy Meredith, was the star of the pre-war United team. He, like Meredith, had won the FA Cup with neighbours City but was transferred to the reds, again with Meredith (and two others), after the whole squad had been suspended by the FA for accepting win bonuses, something banned in those days. Turnbull scored an impressive 25 in 30 games in United’s 1908 league title win and scored the solitary goal in their first FA Cup triumph, a 1-0 victory over Bristol City in 1909. In his 247 appearances, he notched 101 goals and also had the ignominy of being the first person to be sent off in a Manchester derby.

It is unlikely that the match fixers conspired due to worries about relegation. It is more realistic that at a time of great upheaval and disruption to everyday life, the players saw an opportunity to get away with it. Also, though their actions were immoral, footballers were not paid the astronomical amounts they are now. As it happened, Chelsea, the team who finished a point below United and were therefore relegated, were reinstated for the 1919-20 season when the league decided to extend the division from 20 to 22 teams.  United were also knocked out of the FA Cup 1-0 by ‘The Wednesday’ of Sheffield.

The 1939-40 season was cancelled after three matches due to Hitler invading Poland. United had lost to Charlton Athletic, drawn to Chelsea one a piece, and beaten Grimsby Town 4-0. The leagues were then split into ten regional divisions with United coming fourth in the ‘West’ league topped by Stoke City but no-one cared. The 1914-15 season was the only complete campaign during both world wars, but United certainly still gained some notoriety from it. Sandy Turnbull’s death on the battlefield really does prove that football is not, as some people may claim, a matter of life or death. It is much less important than that.