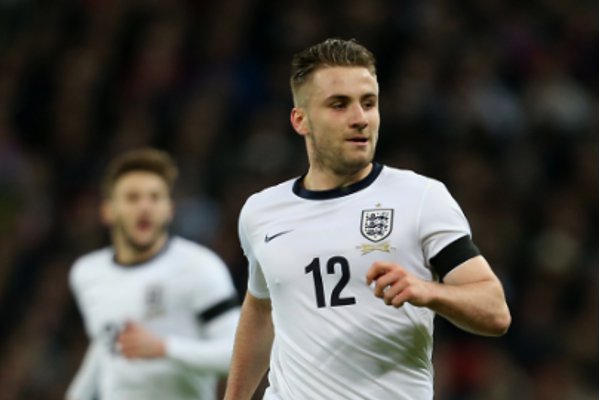 Wednesday’s blog sparked a debate across social media with people sharing their thoughts on which centre half would be a better purchase between Ron Vlaar and Ryan Shawcross.

The vast majority agreed with Shawcross > Vlaar. He’s younger and has a naughty streak about him with willingness to put his head where most wouldn’t put their foot. Another point many made is how Shawcross should have a better understanding of the shirt after spending 4 years at United as a youngster.

If you believe everything that comes out of Ed Woodward’s mouth it was, and I’ll admit, a nonsensical argument, as it is unlikely United will go into the January transfer market in search of additions.

Moving on to the talking points of the day, Luke Shaw has revealed that he played on with an injury in England’s 3-1 victory over Scotland and could miss this weekend’s Arsenal match.

I picked up a few knocks during the game and my left hamstring, which I hurt at the start of the season, I could feel a little bit. We had a discussion at half-time over whether to bring me off then but it was a game I didn’t want to come off in so I played the extra 15 minutes and then Roy decided to sub me off.

Not the bright decision to make. Three points for United could set the club up in a promising position ahead of the Christmas run-in and we need as many players fit possible.

We have members of the squad dropping like flies not only during international break but training and whilst playing for United too. Shaw is our only left back and if he is unfit for Arsenal Louis van Gaal will have to call another makeshift decision.

We will just have to see but I am hoping to be fit.

Elsewhere, Nani is looking to make up for a reckless challenge mid-week on Angel Di Maria by backing United to have a successful season.

Speaking to MUTV, he said:

I continue to follow Manchester United every day. The team are not doing very well but I am very confident the future will be better.

Wonder if he watches us enough to know how much better Di Maria is.

Last week we ran a contribution from founder of PortuGOAL, Tom Kundert, on Nani’s triumphant return to Sporting Lisbon. His performances in Portugal have been so impressive they’ve lead to speculation over a possible return to United once the season long loan comes to an end. A return in the sense he will remain.

It would be hard to turn down if he did come back and found the form he had in 2012 again, but I doubt many see that happening regardless of what he is doing in Portugal.

The twinkle-toed winger has always been a ball of frustration with his inconsistency, dramatic flaps onto the ground and a petulant personality at its purest. Nani failed to develop into the player few realistically expected.

When I say realistically, a lot of fans were guilty of expecting Cristiano Ronaldo II and that was totally unfair. From an early age, upon arriving in 2007, Nani lived in the shadow of his fellow countryman.

Even to this day spectators can be overly critical but it would be rubbish to suggest Nani is anywhere near United standard. Perhaps on his day but that does not occur very often.

Contact us via email if you have any questions.