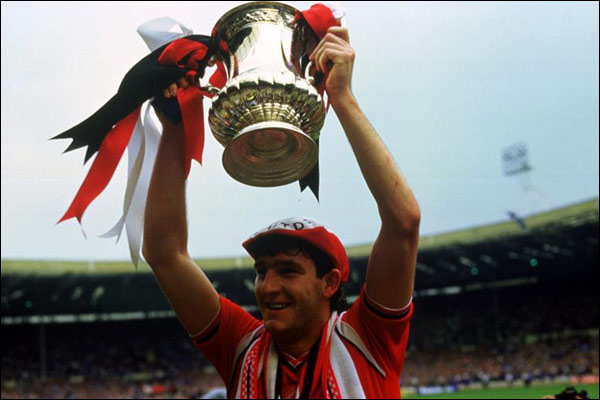 Forget Champions League qualification and anti-climax or fourth place, as far as I’m concerned the one thing United must absolutely do this season is win the FA Cup, a competition we haven’t won since 2004 and not appeared in the final since 2007 in a defeat to Chelsea. Frankly for a club who has won the competition more than anybody bar Arsenal – eleven times – it’s a travesty. However it was a competition sacrificed in recent years for Ferguson’s pursuit of the Champions League, a competition sterilised and sanitised by the money men who started letting teams in for doing half decent 2 years ago. The Premier League isn’t much better either, with the same teams picking up the honours and 24 hour in your face coverage removes just makes you weary and allows people such as Jamie Redknapp and his low IQ score to be considered an expert.

The FA Cup provides the connection to the supporters and the primal excitement that the Premier League lacks with all its glossy fanfare, over-produced coverage and suits with trousers that are far too tight (yes I’m looking at you Redknapp). The first round kicked off on a Friday night that saw the first upset of the competition as Warrington Town, a team many of us probably were not even aware existed, produced a heroically dogged display to topple the comparative titans of League Two’s Exeter City. The game, while not of high quality was still entertaining and engaging despite the BBC’s attempt to cater to the idiot market with Robbie Savage twitching over the mic and in his chair. United vs Chelsea it is not but I quite like the thought of a possible away trip to Warrington’s ramshackle, tiny ground come January or maybe to Croft Park on the Northumbrian coast to take on Blyth Spartans who thrashed the Conference heavyweights of Altrincham 4-1.

It is a competition which not only has the romance and drama it’s more monied, glamourous sibling lacks but it is also a trophy that is an indelible part of United’s history, some of the club’s greatest days were in the cup. United’s glorious Treble wouldn’t have been completed without the cup, just as Eric Cantona’s goal to seal United’s second domestic double – a first – against Liverpool was one of those moments replayed for many years to come and a fabulous strike to boot. Indeed the Treble wouldn’t have been anywhere near as historic were it not for Jimmy Greenhoff firing home the winner back in the 1977 final to stop the all-conquering Liverpool side of the period doing it 22 years prior.

Would anyone trade in the humdinger finals against Palace and Brighton – the former being Ferguson’s first major trophy at the club – for a group stage Champions League rubber match or a flat 0-0 draw with a supposed title rival after an overhyped build up? I certainly wouldn’t, people still talk about those famous finals which so good they were replayed (okay they were drawn). Few will talk of United’s goalless draw with Chelsea last season, a game so forgettable it inflicted temporary dementia on everyone who witnessed it. United won the FA Cup in 1977 and that’s what is remembered, not the erratic league form and the sixth placed finish or the 13th placed finish in 1990 when United beat Palace in a replayed final.

It is this that has made me reconsider my opinion on the Europa League too. Last season I was happy we didn’t qualify, after watching this season’s competition, which has been very good so far, I have revised that call. I was wr….I was wron…I may not have been 100% correct with that call. I wish we had qualified for the Europa League now, a chance at a trophy the club have never won, European glory and to be immortalised. The modern, armchair fan who thinks football lives and dies with the Champions League and the Premier League top four don’t know what they’re missing.

The Champions League isn’t remotely interesting until the last eight. You can keep your group stage Camp Nou or tepid, overpriced Stamford Bridge, I’d rather see United locking horns with Apollon, Asteras or Qarabag. Even in defeat the Europa League is interesting, to this day I’ve never seen United play a tougher opponent than Marcelo Bielsa’s brilliant Athletic Bilbao team with incredible intensity and the special atmosphere of San Memes. The big clubs, including United, have picked the bones of that team and it won’t be seen again. The Europa league provides steps into the unknown and a batch of great away trips for the English yeoman to expand their horizons and tell the Nigel Farages, little Englanders and social media “superfans” to stick their xenophobia up their backsides after finding a great back alley bar somewhere in Croatia.

We won’t have the Europa League this season though, just as we won’t have the League Cup after a historic hammering by MK Dons. However, come a typically grim post-Christmas period when we all trudge back to jobs we hate, we will have the romance of FA Cup and with a one horse title race, we should make the season interesting and go for glory at Wembley. Nobody remembers fourth place.