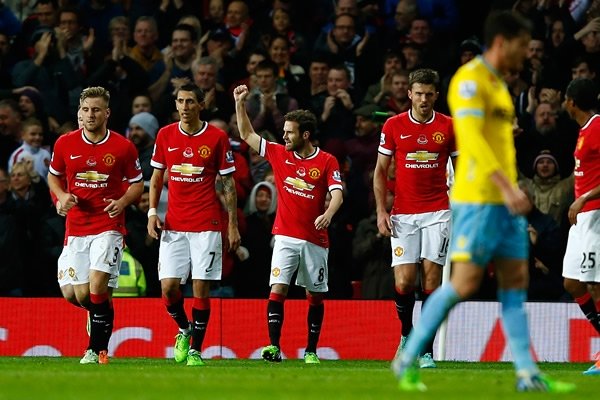 So United are back to winning ways and within touching distance of the top 4 again. That was a difficult game on Saturday. Wave after wave was met with an unrelenting wall of yellow shirts, who seldom posed a threat, whose main objective was to keep things tight and frustrate United. They certainly did that. It wasn’t quite parking the proverbial bus, but it was close enough, bar a Fraizer Campbell chip which he really should have scored after McNair and Blind left it to each other.

United were the only side going to win the game, 23 shots to their 6 and 72% possession only tells one picture. Ultimately, it took a moment of class from super sub Juan Mata to settle the game. He came on for the largely ineffective Adnan Januzaj and his crisp left foot strike past Julian Speroni was a rare piece of brilliance in a predominantly drab affair.

This was by no means a vintage display from Van Gaal’s men, but we picked up an inferior return from the Chelsea and city games where we definitely deserved our share of the spoils. It is a nice change of pace from us to pick up maximum points when we are not going through the gears. The strike from Mata was reward for our perseverance and refusal to get the feeling that it would not be our day.

The young’uns are doing the business aren’t they? Luke Shaw was dynamic going forward, unlucky not to score in the first half from a surging run that left their defence chasing his shadow. He was sound defensively too, the rare forays from Yannick Bolasie and Jason Puncheon were well nullified by both Shaw and Antonio Valencia. Paddy McNair, he is simply growing in stature with every game. He was unperturbed by being thrown into the spotlight at the Etihad and he is a defender who just does the basics and does them well. He is the anomaly for modern day defenders, who are more concerned with playing their way out and lacking the core qualities to succeed as a defender today, defending is the number one, but he can also play out, he has definitely made a promising start to his United career, although stiffer tests than Palace will follow.

Robin Van Persie is seemingly untouchable. He was on the periphery yet again on Saturday and his performances, particularly as the lone striker and the focal point of our attacks, are starting to be of deep concern. I spoke on Friday about James Wilson and how he has a spring in his step, 13 years younger Van Persie he may be but when he came on he was lively and led the line a whole lot better than the Dutchman did. Hopefully RvP can rediscover his scoring form on international duty, especially with his old employers up next after that.

Di Maria was again not quite his explosive self on Saturday, he had a few moments of quality when he left defenders in his wake, but he was just lacking the final ball again. Even with Daley Blind and Fellaini playing very well at the minute, I cannot help but think we are missing Ander Herrera. He had a shocker at West Brom after his rib injury, but he brings something extra in there that Di Maria seems to thrive off. The conundrum is who do you drop to accomodate the Spaniard, maybe even both Spaniards with Mata’s goal giving Van Gaal a nice headache.

It’s Arsenal away next, this was a morale boosting victory, even if we were not at our swashbuckling best, this was one of those hard fought victories you have to grind out when the opposition have no intention of crossing halfway. It’s always a boost to win before an international break, let’s hope for a clean bill of health for the game at the Emirates.

See you after the international break.