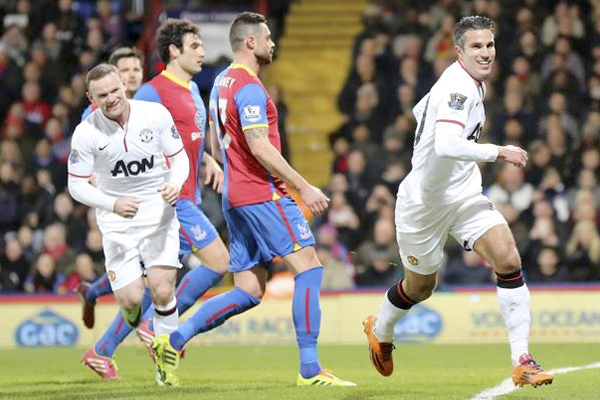 After last week’s valiant derby defeat, United will be itching to get back on the field this Saturday. All the talk this week has been about shift in powers, comparing the 2013-14 Titanic season with this, as Moyes had got off to the better start.

However, the positives emanating from the city game were clear for us to see after the dust had settled- the resilience, fight, effort til the bitter end, although we didn’t get our just rewards, not throwing in the towel in adversity is a trait that went missing under Moyes but has returned with Van Gaal’s vehement self-belief. It is a great quality to have, which is why we will be OK come May.

The stats will tell you that theoretically this is a good time to play Palace, United have never lost to them in the Premier League- winning 8 out of the 10 meetings, with Palace failing to score in 8 of those too. Even with our defensive issues, this is a game the players should be relishing despite our mixed start. This, on paper at least (which obviously counts for little), is the fixture to propel United up the table and hopefully start a run of positive results.

United won the corresponding fixture 2-0 last season, in one of David Moyes’ more routine victories as United boss. Kagisho Dikgacoi was sent off for a professional foul on Ashley Young and Van Persie tucked away the subsequent penalty. Wayne Rooney, sporting that head band at the time, sealed the win with a free-kick. That game also marked the start of Adnan Januzaj’s United career, he lifted bums off seats that day, and with the right guidance will continue to do so.

Palace are winless in their last 4 league matches and with that stat of only claiming 2 points out of a possible 30 available against United, you would think that Neil Warnock would be telling his players to keep it tight. Palace are actually a very dangerous team on the counter- they have pace in attack with Fraizer Campbell’s qualities well-known to United fans, Jason Puncheon and Yannick Bolasie, they can hurt teams by inviting them on and attacking with speed.

Fraizer Campbell can reflect on his United career and count himself unlucky. He was only behind Ronaldo, Tevez, Rooney and Berbatov at the time, and that is no slight on the Mancunian. He has a good scoring record against us, notching for Sunderland and Cardiff in successive seasons. He is a handful, he’s quick and got a finish on him so he will need to be watched attentively.

Yannick Bolasie is a rather mercurial winger, on his day he can be devastating with pace to burn. The one thing labelled against him is the lack of an end product at times, but the core attributes for a winger are in place and, if selected, might relish taking on the makeshift right-back Antonio Valencia, if Rafael is not over his injury.

United’s defensive woes continue with Chris Smalling and Marcos Rojo sidelined through suspension and injury respectively. We have had to use 10 different centre-back partnerships in as many games. That 1 a game ratio may be maintained on Saturday, with either Michael Carrick or Paddy McNair likely to be selected alongside Tyler Blackett to maintain that right-foot left-foot balance that Van Gaal prefers.

There has been a clamour for James Wilson to start up front, with Robin Van Persie off-colour again at city. Is Palace a nice game to throw in the youngster? Probably. He caused havoc on his only first-team start against Hull and notched twice, and he gave Kompany and Demichelis a hard time in his cameo last weekend. A really impressive outing on Monday at Leigh Sports Village led to a premature substitution, with Saturday in mind maybe. United need energy and a boost up top, and he could provide it.

Rafael, Phil Jones, Jonny Evans are likely to still join Smalling and Rojo on the absentee list. Spaniards Ander Herrera and Juan Mata will both be vying for a start, after both being unused subs last weekend.

The visitors have had a big blow thanks to Mile Jedinak, their influential captain and bite in the midfield, picking up a red card in Monday night’s defeat to Sunderland. Wilfried Zaha is ineligible to face his parent club, while Stuart O’Keefe is missing. Dwight Gayle, who famously wrecked Liverpool’s title dream last season, will compete with Marouane Chamakh and Campbell for a starting berth.