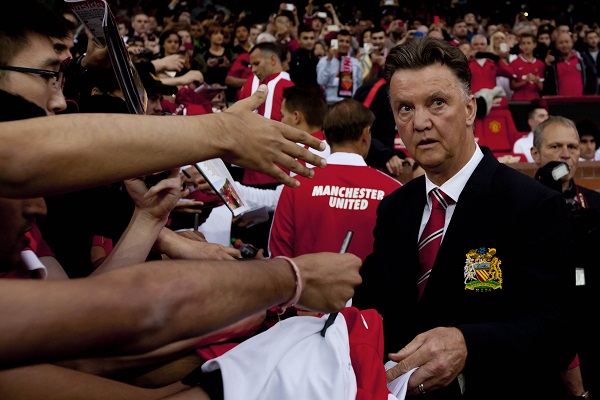 Once the dust has settled and the majority of United fans return to their senses following the Manchester derby loss, the world will suddenly seem a much less bleaker place. Overlooking Louis van Gaal’s tenure so far as Manchester United manager, even the most optimistic of fans would struggle to find any real positives from the results obtained so far. The club has now played ten Premier League fixtures already, and an additional League Cup game, so we’re well and truly into the season. As such, it is difficult to argue that we’re still ‘getting started’, or whatever excuse you can pull out of the bag.

David Moyes, a manager who had an extremely questionable start to his Manchester United career to say the least, has been used as a stick to beat the current Manchester United manager with. In his first ten league fixtures as manager, Moyes managed 5 wins and notched 17 points to van Gaal’s 13 points and 3 wins. Moyes’ side also scored 17 and conceded 13, whilst United have only scored 16 this season and conceded 14. Couple that with the massive investments made by the club this previous transfer window and the overall picture doesn’t look very promising. Regardless of what the table shows however, closer analysis highlights numerous factors that are overlooked or unaccounted for by the simple comparisons made between the two managers.

Initially, although Moyes’ United had 4 points more than United do this season at the same stage, they were still 3 points behind Spurs who occupied fourth spot after ten games. Given that the expectations for the club are to qualify for the Champions League as a bare minimum, we can use this as a benchmark for both managers. This season United are only 4 points behind fourth-placed Arsenal, which is only one point worse off than the former United boss. As such, the four-point difference collected between the two managers appears to be inflated. Performance can only be measured in relative terms, and United are barely any worse off this season than they were last year compared to the competition.

Chelsea, Liverpool and City all acquired new managers last season. This meant that the three clubs needed time to settle under the new coaches and gel together. When Moyes was fresh to the United job, he was on a level playing field with our rivals. Van Gaal is one year behind his opposition when it comes to transfers, implementing his style of play and overall influence on the club. This is by no means a small factor and must be considered when criticising his start as United coach.

Moyes also inherited a title-winning squad, fresh off walking the league under the leadership of Sir Alex by an unbelievable margin. Confidence would have been high when Moyes took over. Van Gaal on the other hand has inherited a team that just about finished seventh, that is shot of confidence and morale after being embarrassed in pretty much every way feasible the previous year.

The squad Moyes took charge of consisted of experienced, highly decorated footballers who have been at the club for years – they knew the club inside out and what was needed to win the title. Compare that to the players under van Gaal’s disposal and it’s a completely different story. For starters, the entire defence has consisted of young, inexperienced footballers that are still learning their trade. The defensive problems were not addressed in the summer too, which has led to youth players such as McNair and Blackett featuring heavily this season. Moyes however had the likes of Rio, Vidic and Evra featuring for him – proper veterans of the game.

It could be argued that the midfield is much better this season than it was last, and that would be a fair point. But the fact that it has changed so much just goes to prove that more time is needed for the team to properly function as an effective unit. The midfield Moyes had, although not of the same quality, had at least played together for numerous years and needed much less time gelling together.

The injury crisis United have suffered this season has also been catastrophic. It is hard to know if this is a consequence of van Gaal’s training methods. As such, benefit of the doubt should be granted, which leaves bad luck and some terrible decision-making as the only feasible explanations. Both of these factors are out of the manager’s control. The game against City saw Valencia, Carrick, McNair and Shaw as our defensive unit – a fitting example of how injuries have plagued our season. The new manager deserves to have a fit squad before we can judge him.

Lastly, another factor overlooked by many is that David Moyes had played an additional three Champions League games at this stage last season. This would have provided him with the luxury of rotating players, testing new tactics and trying out different game plans. Van Gaal has not been afforded this luxury and so it has been far more difficult for him to figure out his strongest starting eleven.

Results aside, the style of play has changed completely this season. The team are passing the ball brilliantly at times and there is a far greater threat in every attack. The ten men who played against City had them completely pinned down for the last twenty minutes at their own ground. Moyes’ dire football appears to have become a thing of the past with there no longer being a long ball played every time a defender acquires it. Instead, the central midfield are actually receiving the ball and distributing it accordingly. We’re actually playing football again. Proper football – the creativity, energy and excitement is back. Moyes took all that away from the club.

The team spirit is back too, which is something that was completely lacking under the previous regime. After going a goal down at any point last season, the match could’ve gone on for hours and United would have continued to pose no threat to the opposition ‘keeper whatsoever. This has changed completely this season, as demonstrated by the two late equalisers against Chelsea and West Brom.

Crucially, the club appears to be going in a positive direction under Louis van Gaal. You can tell he has a long-term plan in place and that we’re barely into phase one. There’s positivity all-round now, whereas the team looked dire and lost under David Moyes. He couldn’t believe he was managing United and neither could the players. There was no long-term strategy put into place and the club appeared to be trudging on a game-by-game basis. We were not going anywhere with him. All this has changed under the current manager and the team is well on its way back to the top. I’d argue that the club is four or five players away from competing for the title again, such is the confidence I have in van Gaal.

Stats play an important role in football but they can also be used to manipulate and distract. The truth is that United were in a dormant state under the previous manager and all that is changing under the new boss, regardless of where we were at this stage last season. Under David Moyes we were stuck in mediocrity. The club is only heading in one direction now thanks to the stewardship of Louis van Gaal, and that is up. Have faith – we’ll be back.