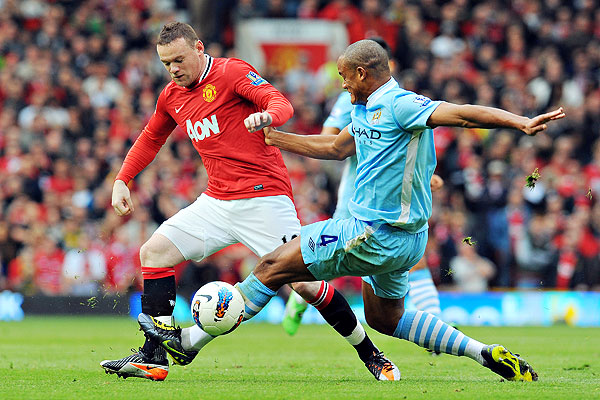 SN writers Dale O’Donnell, Richard Cann and Paul Rowles select their Manchester United teams to play city on Sunday. Manchester Evening News have done the exact same so check out how our teams compared to theirs.

Louis van Gaal’s men travel to the Etihad on Sunday to face the Premier League champions. United go into the game on the back of a morale-boosting result against Chelsea whereas City have since suffered defeats to West Ham and Newcastle.

Wednesday night saw a 2-0 defeat against the Magpies knocking Manuel Pelligrini’s side out of the Capital One Cup. However to make matters worse, David Silva and Yaya Toure both suffered knocks resulting in doubt regarding their involvement for this weekend’s derby.

The reds have had a lot of injuries to deal with this season but captain Wayne Rooney returns from suspension. The future is starting to appear brighter under Van Gaal.

Cast your mind back 2+ weeks and the opinion of wanting Marouane Fellaini to start in a derby would have been unheard of. Since coming on as a half-time substitute at the Hawthorns and showcasing a man of the match performance at home to Chelsea, such attitude towards the player has been altered.

Wayne Rooney does not feature in my starting XI despite the relief of having him back in the squad from suspension. There were reports earlier in the week that a knock in training would rule him out of the derby, so starting Radamel Falcao and benching the newly appointed captain would perhaps make more sense.

At the back, Chris Smalling and Marcos Rojo to continue their pairing as seen last Sunday. Phil Jones would be a preferred option to the former but it is still unknown whether’s he will return in time from injury. De Gea picks himself.

Two weeks ago it would have sounded ridiculous to say that the biggest question mark before the derby is whether Marouane Fellaini should start alongside Daley Blind in midfield, but the Belgian’s standout performance against Chelsea makes him hard to ignore. However, I would favour a return for Ander Herrera on the right hand side of a midfield diamond, the Basque providing energy and more creative quality. The temptation to play two holding midfielders and sacrifice a forward is strong, but City are vulnerable at the back and attack may be the best form of defence.

Juan Mata’s recent anonymity means that Wayne Rooney should return and start behind a front two of Robin Van Persie and Radamel Falcao. United are strongest when going forward and with their defence still vulnerable will likely need to score at least twice to win the game. Di Maria was disappointing wide on the left against Chelsea and should return to a more orthodox left midfield role, with the full backs, Rafael and Luke Shaw, providing width. The latter was excellent last weekend and both will need to produce high-energy performances and concentrate for the full ninety minutes.

In the centre of defence there are few options if Phil Jones is unavailable through injury. Although I’m not a fan of Chris Smalling he played well on Sunday and an away day at the Etihad requires experience over the youthful promise of McNair or Blackett. The same applies for Rojo, who doesn’t look a natural at centre back in a back four but is the best United have at the moment.

Big Dave picks himself these days. He has been outstanding once again this season, and was my vote for October’s Player of the Month on United’s website. He’s so much more commanding, he’s had to be with a creaky defence, he has been the constant. His saves from Bryan Oviedo and Eden Hazard among others this month were miraculous, a similar performance against an under-performing city will go a long way to securing a good result.

The defence looked a lot more assured against Chelsea. Injuries have not helped in terms of continuity but they showed promise and managed to shackle the undoubted attacking qualities of Hazard, Oscar, Drogba and pals on Sunday. Continuity is essential, especially with arguably the league’s hottest striker in Sergio Aguero pitting his wits against us. This defence has a nice balance- paces on the flanks right and left footers in the centre. Let’s hope they replicate their showing against Mourinho’s men.

Blind’s positional nous and eye for a pass will be needed on Sunday. city will doubtless dominant the ball for long spells, which means we have to be clinical in possession as we look to hit them on the counter. Should David Silva prove his fitness after last night’s injury, Blind could be entrusted with man-marking the Spaniard as he is their main ammunition provider. Who would have thought this time two weeks ago that Fellaini would be almost a unanimous choice to start the derby? His turnaround has been promising, but this is the acid test of his renaissance. His encouraging displays against West Brom and Chelsea will be a huge lift to his confidence, the battle against Yaya Toure, again if fit, will have a huge bearing on the outcome.

Di Maria, although relatively off-colour against Chelsea, will be pivotal on the counter with his directness and pace. Mata was picking up decent pockets of space at the weekend and, almost in the Silva mould, will hopefully sufficiently create the opportunities for the likes of Rooney and Van Persie. The skipper will return after a three game ban in the knowledge that he has the most goals in Manchester derbies, something that city will know too. It’s a timely return, a big game player and will provide industry as the first-line of defence.

A better display versus Chelsea from Van Persie, hopefully the stoppage time strike last time out will be the catalyst for a consistent run of scoring, as doubts were creeping in whether his better days were behind him. Had he not equalised at the weekend, I’d have been inclined to select Radamel Falcao, however the Colombian is not a bad super-sub is he? The confidence should hopefully have returned to the Dutchman’s game, and he is a striker that relies on confidence and rhythm.

Next up we want your views. Which selection do you prefer most or what would you change ahead of the match?