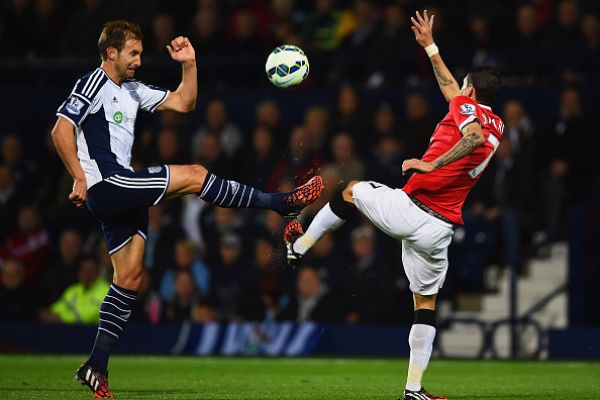 To call him United’s best player on the night would be doing a disservice to Daley Blind and Rafael,  but one thing that did stick out was that the Argentinian always looked dangerous on the ball. Knowing the ability that he possesses means that every time he touched the ball, United fans expected something of him. He looked far and away the classiest footballer on the pitch, despite having a rare off-game. That he can still look good when nowhere near his top gear means that Chelsea will be wary of the threat he can pose to their solid backline. Provided he shakes off his groin injury, of course.

The Belgian is not a Manchester United player. That has been established by now. His performances last season, whilst far from the worst, were dismal at times and his ball control wouldn’t have looked out of place had he turned out for Braintree Town. But in the World Cup he helped inspire a listless Belgium side to a victory over Algeria in their opening match from the bench, and he was up to his old tricks again at the Hawthorns. The touch that so deserted him last season was back on show as he fired United level within three minutes of coming off the bench. His movement and height helped United to pose even more of a threat over the next five minutes as West Brom’s backline were bamboozled about how to deal with him. If Louis van Gaal finds his team in trouble again on Sunday, Fellaini could be the man he calls upon.

When Januzaj burst into the first team fold at the Stadium of Light last season it was more out of necessity for David Moyes. Louis van Gaal is in a position where it is much easier to drop the young Belgian to the bench again, with the standard of attackers he has to call upon. Januzaj is a special talent and not just a Macheda-esque flash in the pan. It is no coincidence that he found his best form whilst having a run of games between last October and December. The Belgian is very much a confidence player at his young age, much like another gifted teenager across at Anfield. If Van Gaal can keep faith with him after his lacklustre performance on Monday night, then he will doubtless be rewarded.

It’s difficult to have patience with a man who cost the club nigh-on £30m but that is the nature of signing a teenage defender. He has looked unfit all season so far and both his club and national managers have said as much too and he was caught out numerous times by West Brom’s pacey forwards. This country’s press is very good at building up their young players and then knocking them down again. We’ve with Raheem Sterling recently and it could be argued that the same ordeal is being undergone by Shaw. The left-back is ultimately still only a teenager and is, more or less, learning on the job at a big club like Manchester United. It may take two or three years to see anywhere close to the best of him despite an excellent season with Southampton and a patient fan base is vital in his development.

The midfield diamond that had been used to great effect in recent home wins was ditched in favour of a 4-3-3/4-2-3-1 shape that saw Januzaj and Di Maria acting as the wide men and Daley Blind as a holding midfielder. Van Gaal said it was a necessity as Falcao was not fit to start the game and play alongside Robin van Persie, though this could’ve been countered by playing Januzaj as a front man alongside the Holland captain until the introduction of the Colombian from the substitutes bench. It really wouldn’t be a surprise to see Van Gaal revert to another system on Sunday, specifically to counter Chelsea’s own threats.