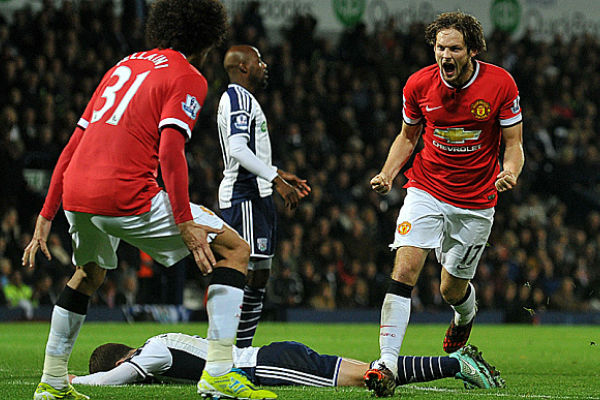 A 2-2 away draw where you’ve dominated the attacking football stats, grabbed a late equaliser and shown more resilience than you’ve done for over a year is hardly crisis material, but you’d be forgiven for missing that from the post-match reaction on social media on Monday night.

For probably the first time this season, patience seemed to be wearing thin with Louis van Gaal’s management style, some of the new players, some of the old players and life itself. I saw lists of players who didn’t play well, encompassing most of the team, a lot of anger directing at former favourites van Persie and Mata, and sarcastic usage of the word ‘philosophy’.

But, damn you all, things aren’t that bad. We’ve still not won an away game under van Gaal, true. Playing van Persie up front on his own seemed like a bad idea and didn’t work, true. Defensively we looked fragile and gave away stupid goals again, true. But there’s plenty of positives.

For a start, Fellaini. For the first time since he played for Everton, we used him the way he should be used. He came on, knocked people over, scared the hell out of the opposition defence and scored an important goal. And generally he did alright. I wouldn’t have him in the starting line-up, but he can be useful.

Next up, the start and end of the second half saw United peppering the home side with incisive attacking football and had them floundering. But for one (maybe two – I never saw a replay) completely blatant penalty that wasn’t given, we’d have come away with three points. For all they were talked up, West Brom barely caused us any problems, with no corners and only two shots on target.

I’m not going to defend the decision to play van Persie up front and leave Falcao on the bench. RVP has been appalling so far this season and was appalling last night. Falcao badly needed the goal he got against Everton but van Gaal’s usage of him after that (taking him off and then not starting him) has been baffling to say the least.

Nor am I going to say that last night didn’t show that we needed to buy a world class central defensive leader in the summer, nor that it wasn’t negligent beyond belief that we didn’t. However, you can’t just ignore the effect our injuries have had in preventing any kind of cohesion. Bruce/Pallister and Vidic/Ferdinand didn’t become great duos by never playing together and you can’t expect any of our fleeting partnerships at the back to just work without hiccups.

It’s also true than Juan Mata hasn’t so far taken advantage of Wayne Rooney’s suspension to claim that number 10 spot as his own. He’s been pretty quiet, usually linking up well but not doing anything particularly notable. It’s a shame, because he’s a quality player and a lovely guy, but maybe there is some susbstance to the insistent rumours that he’ll be sacrificed to raise some transfer cash.

I’ve seen a lot of criticism of Luke Shaw and Adnan Januzaj from last night too, and neither were great. I think Shaw did alright, linking up reasonably with Di Maria going forward but occasionally getting caught out of position and struggling to get back. But let’s face it, he was no worse than Patrice Evra usually was for the last couple of years.

Unlike Evra, he can only get better from experience and there’s plenty of signs that he’s got the talent to be great. Same goes for Januzaj, even though his performances (for the first team at least) this season have been poor and last night wasn’t much better.

It’s easy to nitpick, but I honestly believe that United in 2014/15 are a much better team than in 2013/14 and in a season where everyone apart from Chelsea and City are a bit rubbish, there’s no reason to think that a run free from injuries and the addition of defensive solidity in January wouldn’t get us in the Champions League next season.

Obviously some of the black moods on Twitter may have something to do with the visit of Chelsea at the weekend. Maybe these words will come back to bite me, but I’ve no reason to think it’ll go anywhere near as badly as our games against the big clubs earlier this year under David Moyes.

Maybe van Gaal will gamble with a weird formation and weird team selection (like Fergie never did, of course) and maybe our defensive fragility will work against us, but I think we’ll give it a go and I think we could win. One thing I know for sure is that we’ll go into it believing we can win. And that’s why I’m still confident that Louis van Gaal is taking us in the right direction, no matter how many speed bumps we hit along the way.