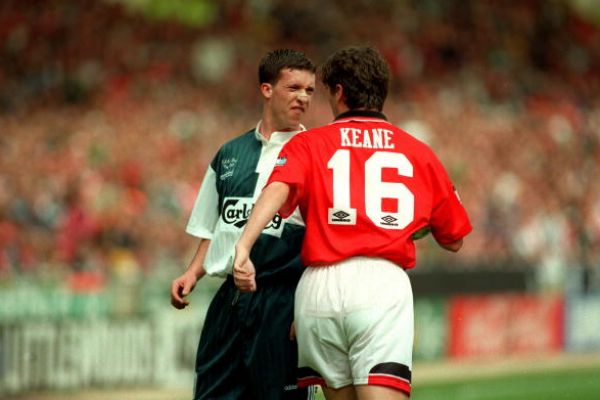 With the release of Roy Keane’s book this week (ghostwritten by the excellent Roddy Doyle) and his media tour to accompany it I started thinking of the never-ending quest United fans and the football press seem to have to find the new Roy Keane at Manchester United. I haven’t read the book yet but his glories, spats and terrifying intensity are well publicised and known by all.

United fans as a collective mind have never gotten over the loss of Roy Keane. An emotional response not helped by a manager more concerned with protecting the new owners by forgoing ever buying another world class midfielder to instead scramble together a patched up machine only workable by its mad inventor. Something David Moyes learned to the cost of his job and far worse, his reputation.

However, for all of Ferguson’s bad scouting and ever more obvious patching up job to save face for betraying many of the hardcore fans for defending the Glazers, a man of Keane’s character is nearly impossible to replace, especially in today’s game. Even in his pomp in the late 90’s early 21st Keane was arguably unique. A man all about winning, Keane wasn’t in it for the enjoyment of the game or the lad culture of the dressing room he just wanted to win and whatever he won was not enough. A mass of contradictions too: Presented as a leader and a “team player” but a thirst for success so all-consuming and unquenchable it became totally selfish and could boil over. Red cards, fraught relationships with teammates and his eventual acrimonious dismissal from the club after a legendary lost interview and a major fallout with Alex Ferguson.

Keane is mirrored by another controversial athlete to release his memoirs, Kevin Pietersen. Pietersen, himself was a man who spoke his mind, was removed from the rest of the time and equally brilliant. Much like Keane he had dug his team out of holes on a number of occasions and struck fear into the opposition as a middle order enforcer and a player who got the crowd going. Pietersen, like Keane was a lightning rod and never seemed to fit with the pally, boy’s club atmosphere of the locker room and it brought about his demise.

Both men, at least for the short term, are irreplaceable.

In a game so heavily weighted by money and a mantra of too much too young, young men will find it damn near impossible to find such levels of desire for professional success? Di Maria certainly shows a drive to his game and mentality, although there is a feeling that is driven by a desire to show his old club Real Madrid how wrong they were to discard him for the sake of selling of extra shirts. Only Di Maria’s former Madrid teammate Cristiano Ronaldo demonstrates the same single minded, selfish commitment to bettering himself, being successful and thus raising the game of those around him.

However while that was a mentality has raised him to new levels at the Bernabeau, it was an attitude forged at United as a starlet and no doubt aided by being tested by the former United captain who kicked him around the training ground in his first season. If another Keano is going to be found then it won’t be done by simply buying him in as many have suggested with Vidal. It will be crafted from a raw, raging diamond at United as Keane was and as Ronaldo was (remember the Richard Hughes headbutt) from stroppy, spotty, gangly teen to a relentless attacking machine and the best pure athlete to ever play the game.

Still that’s all a big if, a person of Keane’s personality is extremely rare and at times undesirable in the dressing room. Vidal, brilliant as he is, is not United’s next Keane. Can anyone imagine Roy teasing a move all summer via his agent, social media and the newspapers throughout a summer? Not a chance. If asked about a move he’d send over an icy stare before admonishing the journalist for such a stupid question. It won’t be Daley Blind either, he’s the ice to Keane’s fire but still a quality and clever footballer who massively improves us nonetheless. It could be Herrera, he has Keane’s combative nature and relishes the physical side of Premier League football to ally to his ability on the ball. Still, he seems abit too boyish and happy-go-lucky to be a raging torrent and never satiated trophy hunter. It definitely is not United’s current captain, he shares some of that rage but it’s toned down these days and when it does show it’s petulant and counterproductive. When Keane got mad, he generally did so with purpose.

Maybe the conclusion is to stop this never ending quest for a man to fill the boots of, as Rob Smyth once described him, the Tony Soprano of football. You wouldn’t want to see the Sopranos rebooted with a poor replacement for its central character and neither would anyone want to sit and watch a second rate Roy Keane tribute act. Just be happy we have the original still around in public life and be happy with a new team of damn fine players giving some optimism to Old Trafford again.

Then again when are football fans ever happy with anything?

One response to “Roy Keane’s replacement may not exist”