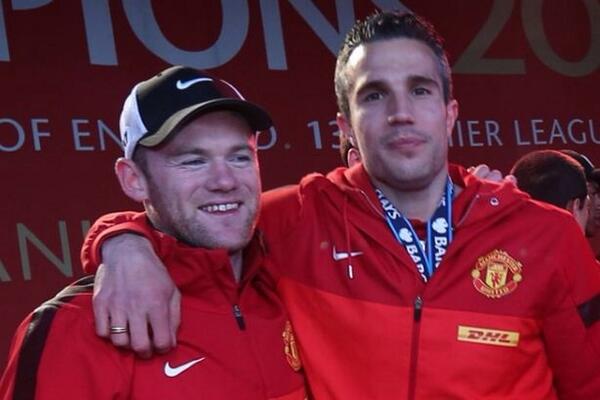 In the wake of Manchester United’s shambolic late collapse at Leicester last weekend and their generally disastrous start to the season, much of the opprobrium from fans and the press has been aimed at either the ludicrously undermanned defence or captain Wayne Rooney. The latter, many believe, deserves neither the captaincy nor his starting place in the team. There is some validity in both of these arguments. Even the most rose-tinted United fan could not deny that a failure to strengthen in central defence has resulted in a back line both undermanned and desperately lacking in quality and experience. Where Rooney is concerned the discussion is never balanced, but without question his form has been inconsistent at best, capable of creating or scoring a goal out of nothing, but also consistently giving the ball away in promising areas of the field. The debate has raged as to whether or not he should be captain of a side devoid of leaders. Whether he’s entirely suitable for the role or not, quite simply, who else is?

The dismay of the fans and their search for someone to blame has led to fingers being pointed at a number of players, but one who appears to have escaped serious criticism is Robin Van Persie, whose own decline in form and fitness since that triumphant first season at Old Trafford has seen him slowly retreat from a figure who was essential to the success of the team to one who is now largely peripheral. From an influential, deadly marksman with a beautiful first touch and intelligent movement to a largely anonymous figure who often fluffs his lines even when put in the position to do what he has always done best: finish. His start to the new campaign has rather mirrored his World Cup, save for that wonderful performance and goal against former World Champions Spain, where he largely under-performed and was outshone by teammate Arjen Robben. Chances have been spurned and his touch has deserted him and the Dutchman can count himself very lucky to have started at Leicester at all.

Rewind back to the summer of 2012 and the football world was astonished when Van Persie got his wish of a move away from Arsenal to one of his former club’s biggest Premier League rivals, a transfer which he described as him following ‘the little boy inside’. And how United were glad he did, as he dragged a relatively average side to a title win with 26 goals in 38 league appearances, 30 in 48 in all competitions. Equally as important was that he appeared to have overcome the injury problems that had plagued his career to that point, not missing a single league game all season. The 2013/14 season started in much the same vein, a brace of wonderfully taken goals helping United to a 4-1 win at Swansea in David Moyes’ first competitive game in charge of the club. But as the team’s performance level declined so did the form and fitness of their star striker. He still scored goals, 12 in 21 league appearances and 18 in 28 appearances in all competitions, but his contributions had become more fitful, the highlight probably the hat-trick which rescued United from an ignominious Champions League Round of 16 aggregate defeat to Olympiacos.

The start to this season was always going to be a challenge for Van Persie, Holland’s run to the World Cup semi-finals meaning that he would miss pre-season and thus be playing catch-up with his fitness in the early weeks of campaign. But what United fans have witnessed is a player who is a shadow of his former self, seemingly devoid of confidence, sharpness and the arrogance in his play that previously made him untouchable. Regardless of his goal at the King Power Stadium, a fortunately deflected header after a terrific run and cross by Radamel Falcao, Van Persie was again ineffectual at best. Previously so excited at the appointment of his national team mentor Louis Van Gaal as United coach, he now appears a distant, peripheral figure. Indeed, some are questioning whether his selection on Sunday owed more to that relationship with his manager than whether he deserved his spot at all. Alternatively, it has been theorised that Van Gaal is trying to drag the player up to full fitness and sharpness by persevering with him in the first team, despite his poor performances.

Perhaps it is neither. But it seems odd that the debate about whether Wayne Rooney should start for United continues as passionately as ever, but that very few are questioning whether it should, in fact, have been Van Persie who made way on Sunday, with Rooney playing as a striker and Juan Mata at Number 10. Whatever the merits of or flaws in the games of the England captain and the Spaniard, Van Persie is currently playing significantly worse than either. Those who might defend him would probably suggest that even when his touch and general link-up play have deserted him that he will still score goals. This is probably true, but then the same can be said of both Rooney and Mata, the former’s 17 goals in 29 appearances matching that of the Dutchman last season and the latter having scored 8 goals in his last 10 starts. Both also have better assist rates.

The debate around Rooney has much to do with the player that he used to be and the player that many wish he was now, the barnstorming force of nature who bulldozed his way through defences and into the public consciousness. It also has its roots in his transfer request in 2010, an act which preceded an extremely generous new contract. None of us know the real motivation behind that act, but the reasons given (that the player was concerned about the club’s ambitions and willingness to spend money under the hated Glazer ownership) were hardly concerns that were far from the minds of the fans either. But football is emotive. That is why it is so great. And attempting to leave your club is the ultimate betrayal, unless of course you happen to be called Cristiano Ronaldo or are really rubbish at football. It is also undeniable that Rooney has lost some of his explosive pace and that slowly moving him back towards his own goal has also exposed his erratic touch. But he remains a player who can make something happen out of absolutely nothing. This is the advantage he has over his Dutch teammate. If Van Persie is playing poorly them he almost completely disappears and without his unerring finishing his game can look very ordinary indeed.

It is perhaps, therefore, those wider issues of trust and personal distaste that have dictated the terms of the post-Leicester dissection, with those vehemently opposed to Rooney’s continuing existence at Manchester United also dragging his suitability as captain into the wider debate about his abilities and character. Rooney has not been good enough in recent weeks, or indeed since his blistering first half of last season. But if a team is to be picked purely on the basis of form and positive contributions to attacking play, then it is hard to make a justification for dropping Rooney (or indeed Mata) before Robin Van Persie. We love the Dutchman for forcing a move from one of our most hated rivals, for single-handedly dragging Fergie’s team to the title in the great man’s last season. He played a huge part in making that dream a reality. Van Persie, these days, is clean cut, clean living, the ultimate professional, pin-up and family man. Rooney is the man who cheated on his wife, cheated on us and yet is rewarded with the captaincy. Both appear to have more lives than a cat. But if Louis Van Gaal is to accommodate Radamel Falcao, Angel Di Maria and give Juan Mata the number 10 position that so many feel that he deserves medium term then something has to give. And as much as many want the fall-guy to be Rooney, on current form and contribution it has to be and should have been Van Persie. But it appears that with Van Gaal not seeing enough quality in the former as a striker the Dutchman will continue to be picked every week, regardless of form and that Mata may well be the one to miss out. Given the respective form of the players, the Spaniard most definitely does not deserve that.