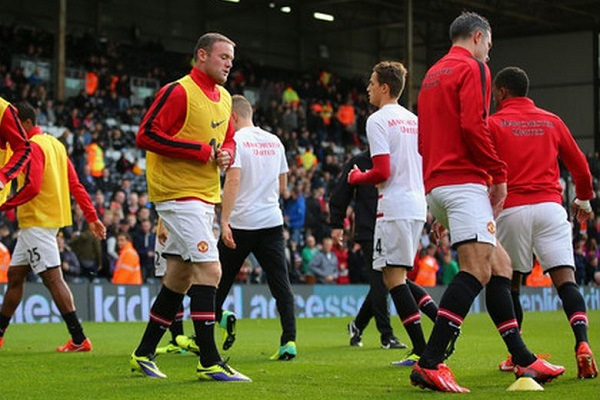 If ever a game summed up United’s start to the season it was the 5-3 defeat to an excellent Leicester City side on Sunday afternoon, it went, as the old saying goes, from the sublime to ridiculous (apologies for using a cliché so tired even Robbie Savage has used it).

The sublime was United’s attacking football in the first hour which threatened to tear Leicester asunder. Di Maria, buzzed around with purpose dealing damage in his wake; Falcao gave us glimpses of his excellence, inside and outside the box; Herrera was dominant in the middle and Van Persie on the occasions he woke up showed real threat in front of goal. The ridiculous: Twice blowing two goal leads with laughable defending (by everyone); Jonny Evans injuring himself again and Mark Clattenberg’s refereeing, which once again demonstrated an ego maniac more concerned with being the star of the show than doing his job.

Even more ridiculous than the permatanned, camp, 70’s sitcom, air traffic controller was United’s captain Wayne Rooney. Hard to know where to start with a man who is attempting to push beyond the bounds of ironic and satirical behaviour to make up for his best years being behind him at 28. One place to start however, would be Leicester’s third goal which was a comedy of errors in its action and aftermath. Chief among the cock ups was Captain “Fantastic” shanking the ball out straight to a Leicester City player. Rather than try and encourage the players after his mistake lead directly to the equalizing goal and shoulder the burden as a good leader would, Rooney proceeded to forgo any responsibility and fire verbal rockets to any read shirt in his vicinity. It was real inspirational leadership that the likes to Robson, Buchan and Keane would have been proud of to be sure and it was a moment that could have been written by satirical masters Chris Morris and Armando Iannucci or at very least Baddiel and Skinner.

Rooney compounded this again by getting himself booked for dissent later, charged around like an overly aroused bull and then once again refused to take any responsibility for his own mistakes and sub-par performance. It was neatly wrapped highlight reel of Rooney’s last 2 years, a petulant, overgrown man child whose behaviour is continually enabled by an employer seemingly in awe of a talent that dwindled some time ago.

Van Gaal has publicly backed Rooney and essentially said he’s untouchable in the team, backed up by being given the captain’s armband and shoehorned into the number 10 position at the expense of the superior Juan Mata. It continues the trend of Rooney being rewarded for poor conduct and performances as a bribe to stay, despite likely not being worth it. Rooney’s approach to leadership so far has been shouting, sulking and delivering 6/10 performances while belittling his teammates. Much the same approach he’s had for the last few years.

Rooney has his defenders of course, for some both in and outside of the United bubble, he can do no wrong and is worthy of the captaincy because he will break Bobby Charlton’s record, something he should have done around two years ago. On the other hand it could be argued Rooney has been given the United captaincy much for the same reason he has the England armband, there is nobody else right now and Rooney has been around a long time. It recalls to me the opening scenes from series three of the brilliant political satire The Thick of It: The Scottish Machievelli, Malcolm Tucker, is furiously trying to find a minister for the pointless DoSAC department in the dying days of his party’s government. When everyone else refuses Tucker is left with the hapless, haphazard and beleaguered Nicola Murray.

Wayne Rooney is definitely the Rooney of our scenario. You can imagine Van Gaal and his coaches furiously rifling through every possible candidate only to cross them off one by one before suggesting drawing a smiley on his right testicle and making that captain.

One feels that Rooney’s peak was the 2011/2012 season when he hit 34 goals in 44 games. Since then Rooney has never found the rhythm and consistency to his game. Hard living off the field has led to a history of fitness issues as well as not having the hunger and maturity to work to fulfil his talents has lead us to where we are today. To a footballer far below his best and the same mentality he had 12 years ago who has lost his right to be calling the shots at Manchester United.

14 responses to “Wayne Rooney: Petulant, pathetic, past his best!”