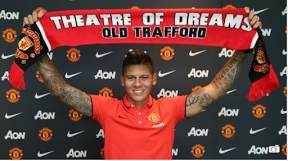 Finally, a weekend of cheer for all United fans with our first win of the season, coupled with points dropped by two of our closest rivals.

I tweeted six hours prior to the team being announced that I believed Rojo, Di Maria and Blind would start. I also noted that Shaw and Falcao would start on the bench, all of which proved accurate. Let me explain how I came to that conclusion so early on:

Rojo was a given, particularly with our current injuries in defence. Di Maria & Blind were also the best midfield options available to Louis van Gaal, both of whom were impressive for their respective countries during the International break. Herrera was also a given and I opted against stating the obvious when it came to Ander. There was no way he wouldn’t play today. If he’s fit, he plays. No question!

Luke Shaw is back from injury but not yet at full fitness, so it was no surprise to me that he did not make the starting XI.
Radamel Falcao was predicted to start by many but I suspected Louis van Gaal would use this as an opportunity to send out a message, which he did. Keeping faith in Mata, Rooney & van Persie was crucial for this match. Firstly, it was a signal of strength and character. The message was clear, “Look at the players on the pitch and look at who I can leave out”.
Secondly and perhaps more importantly, it was a subtle reminder to those three players that they must improve & perform well from now on. He is willing to keep faith in them but ultimately Falcao is the biggest threat to those players at this point, so it was no surprise to see two of three on the scoresheet today. It’s a win/win situation for United no matter what the outcome & it was very clever of Louis van Gaal to hold him back.

So, how did these new signings do if I don my unbiased, analytical cap for just a moment…

Daley Blind
For me, it was a man of the match performance from Daley. Unfortunately, he’s going to go through most of the season as an unsung hero, whilst the big names steal the headlines through their goals & assists. However, he is going to be pivotal to the success of Manchester United from now on.
Daley covered every aspect of the pitch today, temporarily filling empty spaces as the rest of the team pressed on. When Rojo bombed forward for instance, who was there to cover the position he vacated? The same applied when the likes of Herrera & Di Maria moved into the attacking third. Daley produced a promising display of tactical awareness & intelligence, something which United have lacked from midfield for some time. It was a brilliant performance from our new Dutch midfielder.

Angel Di Maria
You can see why he won the pundits & official man of the match award. A goal & assist to his name, dazzling runs at pace, exceptional vision & at the heart of everything positive in United’s attack. Whilst he was somewhat fortunate with the goal, he created so many chances for the rest of the team. It’s refreshing, though perhaps a few seasons too late, to see United play from the middle of the park rather than predictably out wide. His runs towards the opposition caused havoc and generated so much space for others to exploit. His touch map shows exactly that and his ability to carry the ball forward was particularly evident for Herrera’s goal.

To have a player of his capability in the team feels long overdue, but incredibly welcome!

Ander Herrera
Back from injury and back with a bang! Some much needed injection of energy, particularly alongside Blind, was a breath of fresh air to witness. He managed to get himself on the scoresheet with a well-timed finish, but was unlucky not to score moments earlier had van Persie left a teasing cross from the left from Di Maria. You could excuse a lack of communication at this stage, but it’s an area I’d like him to control in future. Stake your claim & make it yours, Ander!

Marcos Rojo
I get the feeling that a player like Rojo is in need of maturing a little, but the talent is certainly there. His decision making at times could have been better, there were in fact a couple of occasions where I had to double-take as he appeared the furthest man forward in the box, which is daft considering the attacking players we had on the pitch. There was no real need to be that high in my opinion, though I can appreciate he wanted to impress and probably get a goal to his name.
It’s also worth remembering that our defensive line-up is a little makeshift at present, there will be changes afoot and he will need to familiarise himself with some frequently adjusted line-ups in that area of the pitch until we’re back to full strength. I hope he is able to cope with that, as some defenders really aren’t able to build their understanding with weekly changes to partnerships & expectations. Language may be an issue for him during that time also, which won’t help matters.
However, on this occasion it was a good start for Rojo the red!

Radamel Falcao
I dare say I’ll be singing songs of praise for Radamel in future, both from a United fan’s view & sheer admiration from an analytical perspective. I’ve already provided my views on Falcao in a previous article and I’m truly excited to see him play in England.
On this particular occasion he wasn’t able to generate much from the 30-odd minutes he was given, mainly due to the fact the game was already won and United had taken their foot off the pedal prior to his introduction. He had a half-chance to score from a rebound but Robert Green was able to parry the shot to safety.
We got a sneaky glimpse at the movement of one of the best strikers on the planet though and there’s no denying he will put away many chances this season, particularly with Di Maria in the side. I don’t expect to see many changes next weekend, so his next home match could be the first real opportunity for him to shine.